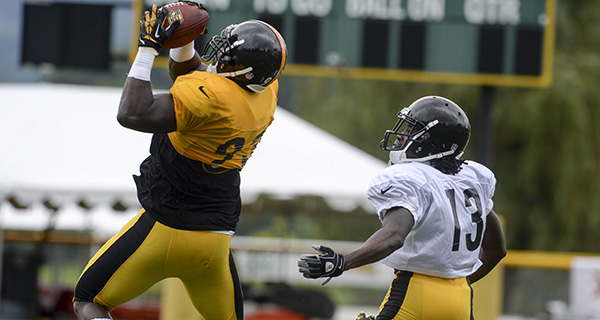 The Pittsburgh Steelers defense finally recorded their first interception of training camp during 11-on-11 drills Monday and it was made by outside linebacker Jason Worilds of all people.

Worilds reportedly made a nice interception while covering speedy rookie running back Dri Archer on a wheel route and the play quickly became the buzz of Twitter.

Worilds, according to several media reports, had a solid practice Monday and that’s great to hear being as the former second-round draft pick missed most of the offseason practices with what was described as a quad injury of some sorts.

Worilds, who signed a one-year, $9.754 million transition tender earlier in the offseason, even impressed head coach Mike Tomlin with his grab.

“That’s the first time that Jason Worilds has caught a ball in any fashion out here – in a practice, in a walk-thru,” said Tomlin. “I call him the defensive end from Blacksburg. I’m going to paint that ball and give it to him.”

So what was more impressive, Worilds catching the ball or him being able to run with Archer?