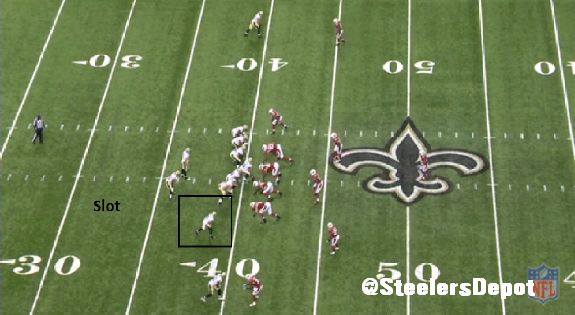 To evaluate Moore, we broke plays down into two categories. Where he lined up on the field and the route he ran.

There are three pre-snap designations for him based on where he lined up. The “Z” receiver, the “X”, or in the slot. The “Z” is the one to the strongside of the formation. The “X” is away from it. And of course, the slot is in between. Below are examples of each. 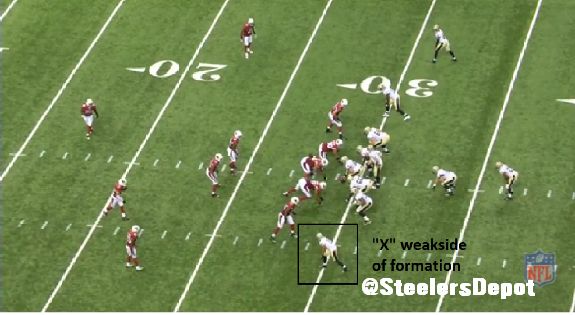 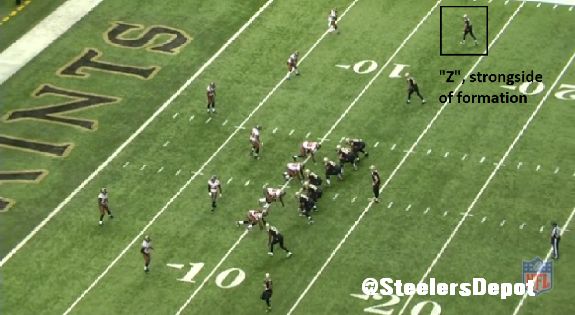 Although there are route trees that are much more intricate, I kept it simple and used the basic nine routes receivers run. For reference, you can check it out here.

Using the simple route tree did occasionally make the charting a tad subjective. For example, I counted shallow crossers as dig routes and deep crossers as posts. But overall, it wasn’t much of an issue.

The first of five games I broke down of Moore. He started the game with the Saints in a two wide receiver set. But overall, when the team went with 12 or 21 personnel, Moore was off the field.

Caught a pass on the first drive and showed good body control, sliding to the ground to make the reception.

Throughout the game, he showed smoothness and fluidity in his routes. Although this pass fell incomplete, it’s a good double-move from Moore to create separation. He’s at the bottom of the screen matched up against rookie corner Desmond Trufant.

Like the numbers indicate, he saw an even mix of pre-snap alignment. Used all over the field and certainly not confined to just the slot.

As will become common throughout watching Moore and the Saints, their spread out offense made it difficult for teams to press at the line. Moore got the benefit of a lot of soft zones and off coverage considering few defenses have the personnel to play man-press against the weapons New Orleans has.

Moore looked like a somewhat willing blocker but it’s certainly not part of his skillset. Of his 20 run blocking snaps, he was typically lined up away from the formation and not to the side of the run.

Kenny Stills started the game over him as the Saints began the game in 12 personnel.

Mistake in the third quarter that led to an interception. Running a fly route down the seam, Moore slows down to turn and look for the football. Consequently, the pass sails over his head and is intercepted by Tyrann Mathieu. Mistake by Moore. Have to be able to track the ball while maintaining speed and continuing the route.

This is the play he would get hurt in, injuring his wrist. Jumped for this pass and doing so really wasn’t necessary. Prefer to have receivers that keep their feet on the ground when possible. Also may have made a business decision, dropping the ball after seeing the safety coming across the field who ultimately blasted him. 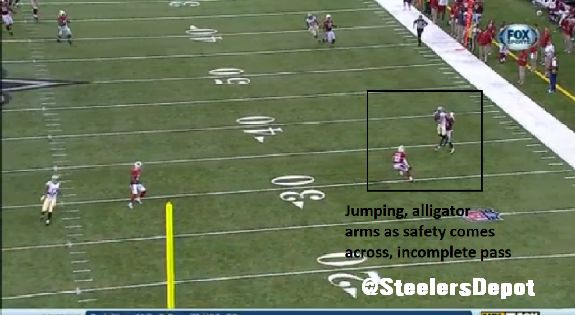 The injury would cost him the next three games.

Looking at the positives for a brief moment, he continues to show some quicks and ability to win off the lin. Got in and out of his breaks quickly.

Did have questions about his long speed. Plus, he’s not a physical receiver. Again, got the benefit of playing in a ton of soft and empty zones with little press coverage. Any sort of tight coverage was merely to just funnel him inside or outside depending on coverage.

This was Moore’s second game back after his injury. Statistically, one of his better games of the season hauling in six passes for 70 yards. Got involved with the offense early, seeing four targets on his first five snaps, recording three receptions.

Positives and negatives to his first catch of the afternoon. Holds on after taking a shot from safety Antonio Allen but again, jumps with the ball in the air.

After getting involved on that first series, he didn’t see many snaps until the 4th quarter. Just 14 snaps through the first three frames. Thirteen of those were passes continuing to show how little used he was a run blocker. Saints were using a lot of Heavy packages that kept Moore on the sidelines.

Working in the slot so much, Moore ran a lot of “option” routes. Routes that would be based on coverage. He’s competent in that regard. Knows when to sit down against zones and to run away against man coverage or matchup zone.

Also shows it here on this deeper route. He’s about to stem the route to the inside on a post, trying to get in front of the safety. 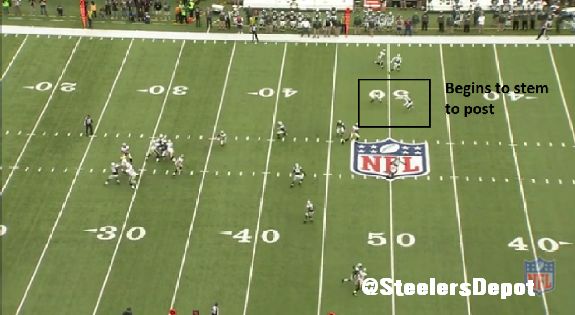 But when the safety begins to cheat up and locks on Jimmy Graham running down the seam after Drew Brees’ pumpfakes that direction, Moore breaks his route off and continues downfield. 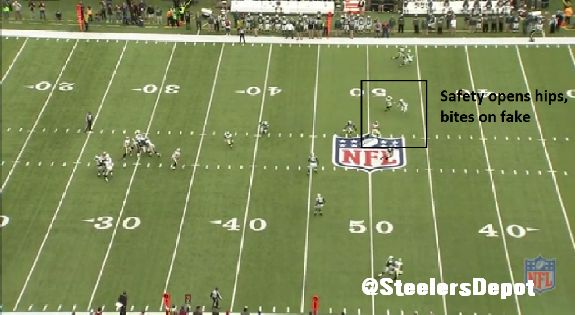 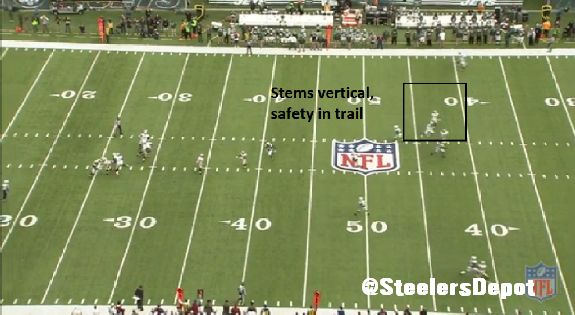 It’s subtle, a little hard to see, and the pass doesn’t come his way, but it shows a good deal of football intelligence.

Did have an ugly drop on a shovel pass but wasn’t something I was too worried about. Also served as the team’s punt returner though did nothing more than fair catch.

Started the game with the Saints in 11 personnel but Stills was inserted over Moore in 12 personnel.

Wish Moore would have extended his hands instead of trying to bring the ball into his chest. Mike Mitchell is able to swat it away. There’s a fine line between a six points and an incompletion and this play shows it. 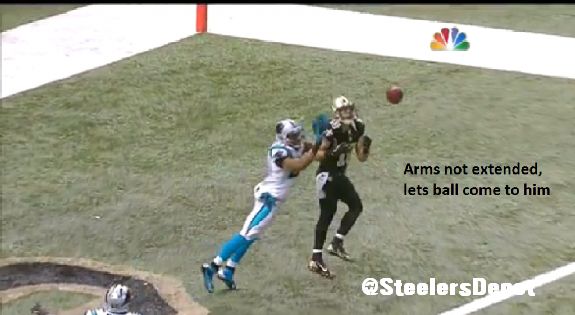 Poor run blocker and was almost exclusively used outside the numbers as the “X” receiver on running plays. Trying to block downfield on a screen, Mitchell easily sheds him to bring down Darren Sproles. 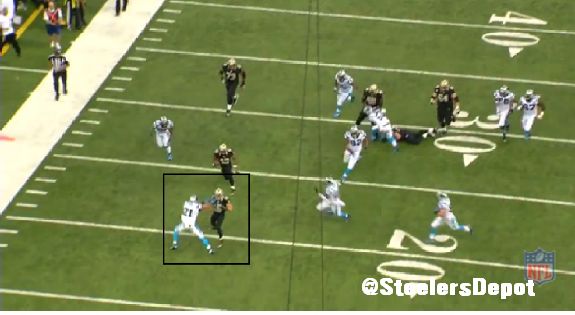 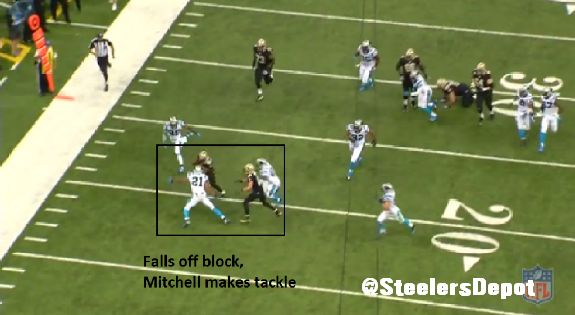 On the plus side, gets great separation in the GIF below. Serving as the “X”, turns the cornerback around, settles down, and makes the catch. Does seem to slightly jump again, however, and that attitude hurts his ability to get YAC.

His snaps dwindled as the game wore on. With the Saints having a 24-6 lead in the third, they employed a lot of 12 and 22 personnel, keeping Moore on the bench.

Fairly nondescript game. Did snag his second touchdown pass of the season but it came via busted coverage. Safety doesn’t carry vertical and Moore runs up the seam for six. 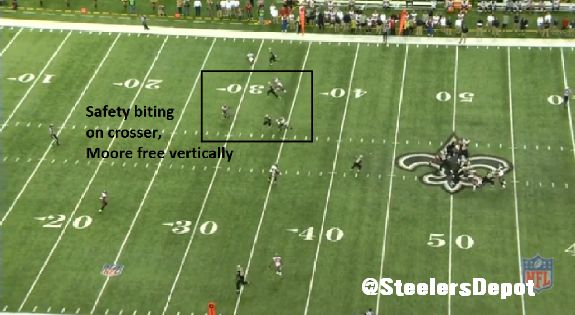 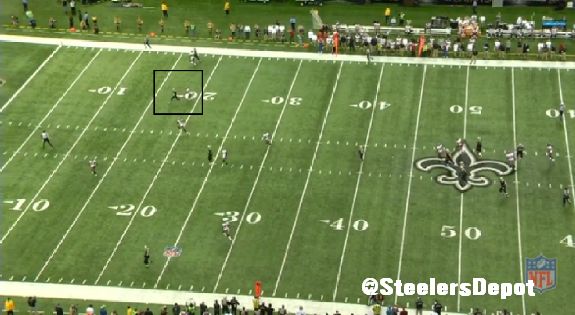 Again, he showed the knowledge to sit down vs zones and run away against man coverage at the appropriate times.

Like what occurred against Carolina, the Saints built up a big lead and ran the ball limiting Moore’s playing time later in the contest.

While he was used most often in the slot and sometimes split away because of his run blocking deficiency, he is not exclusive to the slot. Moore is capable of lining up anywhere, from inside the hashes to outside the numbers. It’ll allow the Steelers to be flexible with their personnel putting Markus Wheaton and perhaps even Antonio Brown in the slot.

When a lot of people have discussed Moore, they’ve  referenced his injury. But we’re not talking about a leg or ankle that slowed him down even after his return. It was a wrist. Not that concerned about it and it shouldn’t be an excuse for his performance last season.

His playing time was predominantly reduced due to the emergence of Kenny Stills who posted a 32/641/5 line. Being that Moore is a poor blocker and lacked the size (5’9/2 190) the rest of the Saints’ wide receivers had, he became the odd man out.

Moore possesses decent hands and overall, does a good job of extending them away from his body. Can adjust to poorly thrown passes and exhibits good enough body control.

As I’ve mentioned throughout the article, Moore has short-area quickness. Quick-twitch athlete who can win off the line and still shows separation skills on short to intermediate routes. Smarts to read the defense and adjust his routes accordingly. Hopefully can be a quality teacher to younger guys like Wheaton and Bryant and hey, even Brown.

Age may have sapped some of his speed and while he was asked to get vertical a good bit, his speed is probably slightly above average at best. I don’t get too excited about it. Don’t like his habit of leaving his feet for passes either.

Part of it was due to scheme, but Moore also doesn’t show much elusiveness after the catch. Not a big YAC guy and I didn’t see him make a defender miss in those five games. For a guy who does have quickness in his routes, it’s disappointing.

Even though I figure he’ll mainly be used in 11 personnel, he probably won’t be seeing as many soft zones as he did in New Orleans. Ditto with the warm weather. Moore played in just two outdoor stadiums from November until the end of the season. Only one of those games, the playoff matchup in Philadelphia, saw temperatures below freezing.

Overall though, it was a quality and truthfully, necessary signing. Team had to add veteran depth at wide receiver after losing Emmanuel Sanders. Moore can be played anywhere and his injury shouldn’t be a long-term problem.

I don’t think he’ll come close to the 1,000 yard, 16 yards per catch feat like he did in 2012, but he’ll be a crafty, mostly reliable target for Ben Roethlisberger.