We’ll continue our free agency series with former New England Patriot running back LeGarrette Blount, who was signed by the Pittsburgh Steelers on March 28th.

In the four games I looked at, Blount always lined up in the backfield so there isn’t much to chart pre-snap. Post-snap charting is as follows.

The number of carries he received and if he ran between or outside the tackles.

Lastly, the “Other” category, an all-encompassing one where Blount didn’t do really anything. These included playfakes that didn’t ask Blount to run a route or protect (mostly bootlegs), FB dives or QB sneaks, and packaged plays with Tom Brady throwing instead of handing off.

He entered the game as the Pats’ starting kick returner. Was the third running back to enter the game behind Brandon Bolden and Stevan Ridley. That first snap coming on the third play of the second series.

Playing just sparingly early, he didn’t see the majority of his carries until later in the second half with New England leading 23-3. Blount saw just five first half snaps. Part of that due to being pulled off the field on third downs.

Liked his ability to make something out of nothing on this early third quarter carry. Shows lateral movement to bounce the run and stiff arms his way to the edge for a three yard gain. It’s modest but better than being stuffed.

His vision and lateral movement stuck out the most. New England ran a ton of inside zone. As a running back, the number one qualification is vision. Blount showed it and was able to read the defensive line and find the open lane. Possessed nimble feet and the ability to change directions well for a player listed at 250 pounds. It was impressive.

A called counter for New England in the pictures below. But Blount sees Gerald McCoy get walled off, opening up the backside “A” gap. He calmly changes direction, hits the hole, and probably gets a bigger gain than what he would’ve otherwise. 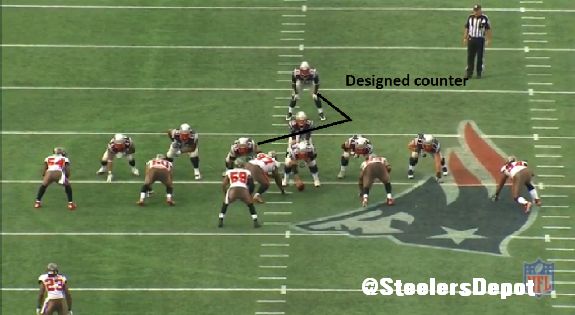 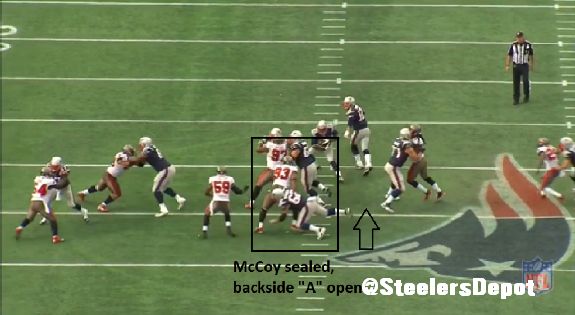 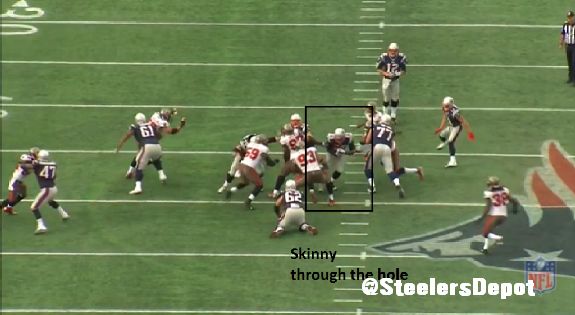 However, it’s common knowledge Blount lacks much of a second gear. Or much of a first gear, for that matter. On one outside zone, Lavonte David easily tracked him down in the backfield before Blount could turn the corner. He also failed to show any sort of elusiveness in the open field.

Starting at running back this week, Blount was pulled off return duties for Leon Washington and later, Devin McCourtney.

Early on, it was clear Blount wasn’t treated as a 3rd down back. On the third play of the game, a 3rd and 14, Bolden replaced him. Blount returned to start the second series. Happened later in the game with him playing on 1st and 2nd down before being taken off by Bolden on 3rd and 7.

Another set of photos to show his vision. Supposed to be Lead Strong behind the fullback. But Blount sees the backside gap available, jumps laterally, and presses it. 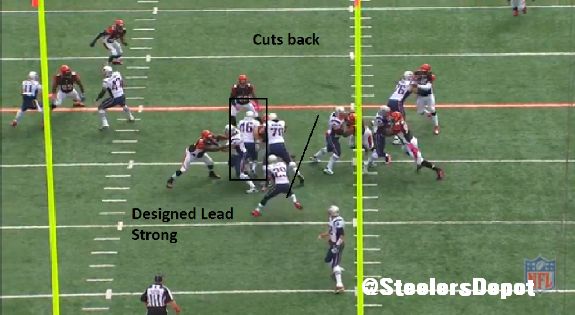 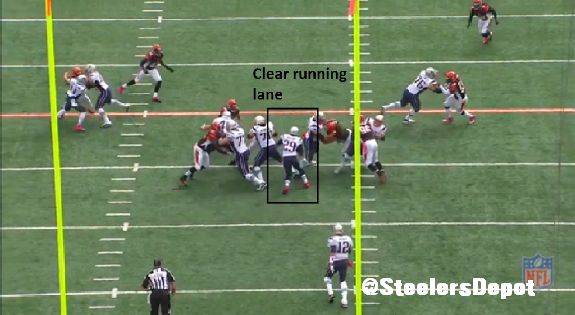 That’s not the playcall. It’s a power run, not zone. That’s him being able to deviate from the “plan” in an instant, make a decision, and execute.

After running mostly zone concepts in Week 3, New England showed they’re capable of running power, too. From Power O (they like to pull the backside tackle instead of guard), to Lead Strong (fullback James Develin played on 27% of snaps, second most of their backfield), to wham blocks – shown below – their running scheme was multiple. 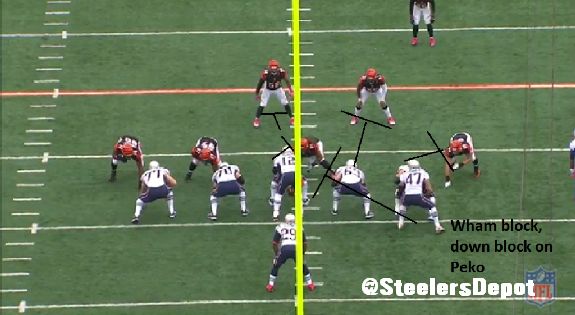 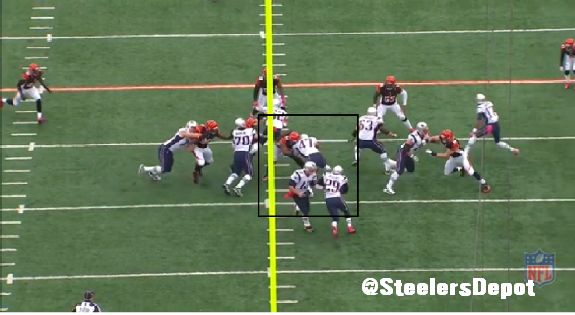 I think New England used the most wham blocks of any team in the NFL. Maybe only San Francisco could rival them.

He didn’t run anyone over but showed some power and the ability to fall forward. Runs through Vontaze Burfict here, gaining a few extra yards before falling down. 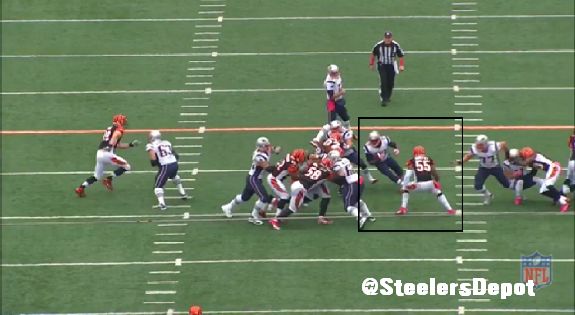 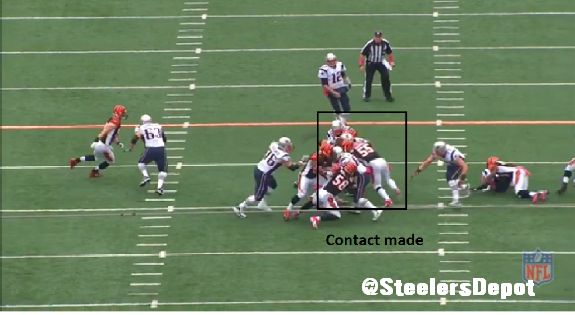 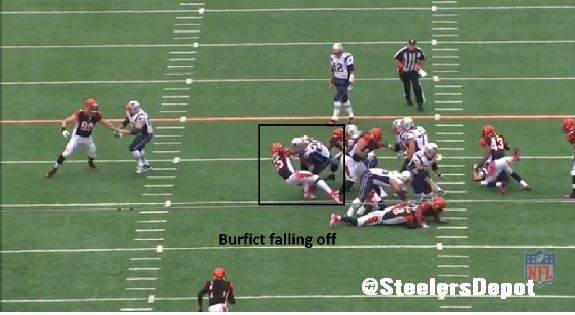 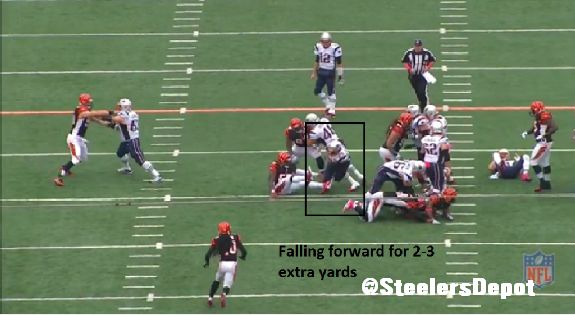 Did lose a fumble but as far as those go, it was forgivable. Carlos Dunlap punched it out from behind. All fumbles are frustrating but I’m more inclined to let something like that slide.

Only ran outside the tackles once, as the numbers show. A toss to the left in the first half.

His routes mostly stemmed off playaction and consisted of curls and flats. Nothing notable and didn’t receive a target.

Even with the 10 carries and decent stat line (49 yards), there wasn’t much to note. Didn’t see his first snap until 5:02 left in the second quarter, coming after Ridley lost a fumble. Blount was removed from the field in any passing situation. Shotgun set, 3rd down and long, a designed screen pass, intention to motion to an empty set. Anything like that, #29 had helmet in hand.

Showed vision and ability to find the hole. Downhill runner who didn’t dance.

Likewise, he showed no wiggle and while he kept his legs churning and fell forward, didn’t fully break through any tackles.

His best game of the regular season, rushing for 189 yards on 24 carries. Had touchdown runs of 35 and 36 yards and for good measure, added a kick return of 83 yards.

Showed some power and usually took multiple defenders to bring him down. Drags poor Jim Leonard and a couple other Bills. Also shows his vision with the cutback.

To be fair, the Patriots were blowing the Bills’ front four off the ball, but Blount still ran well.

Know I’ve harped on it enough but have to show his vision one more time from his first touchdown run.

Aerial shot to show how the Bills’ lined up. Single high, man coverage. It’s an aggressive look with little past the second level. 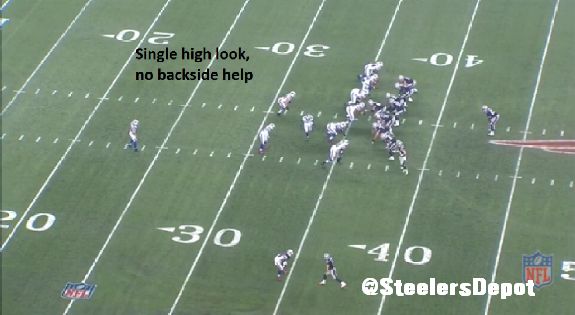 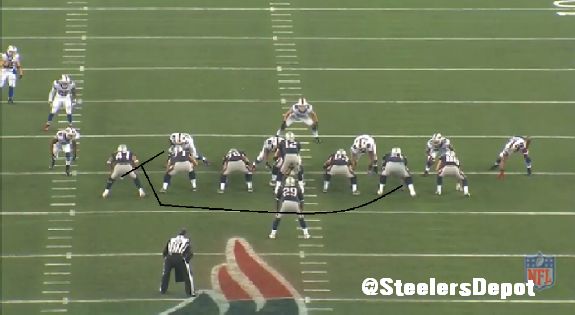 On the snap, Blount starts to follow Cannon through off the hip of the strongside tackle. But after seeing Kiko Alonso flow that way and engage at the second level, Blount cuts it back. Knowing there’s no backside defender, it’s a race against the safety. Blount wins and scores. 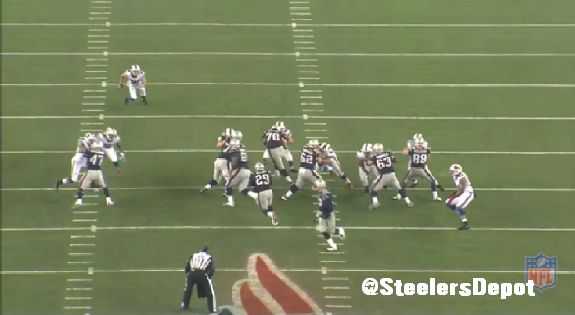 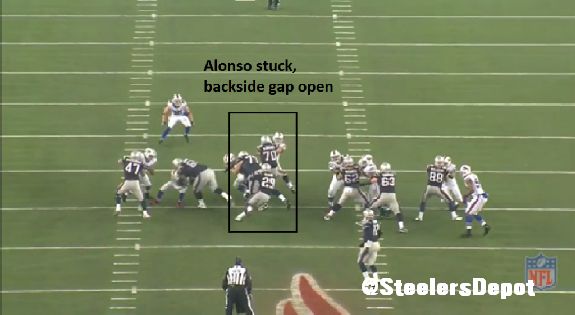 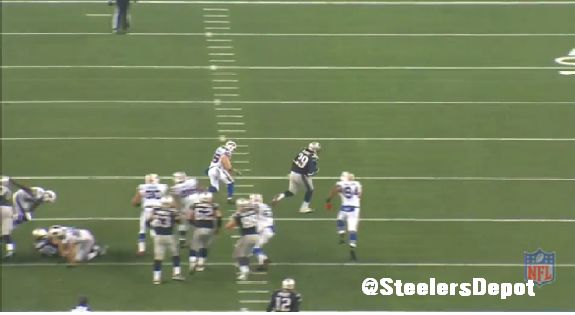 Three negatives. For starters, he went 0-2 on 3rd and short. Only got two on 3rd and 3 and didn’t gain anything on 3rd and 1 later in the game.

On the latter, he seemed to unnecessarily slide to his right and bounce one gap over. Sure, there was a defender slanting down but on 3rd and 1, just dive straight forward.

Had a soft fumble in the red zone the Patriots luckily recovered.

I’ve repeated it in every game so it shouldn’t come as a surprise that his best quality is his vision. Capable of finding the open lane. Just as important, he compliments it with his lateral movement. Quick, nimble feet, allows him to hit the hole. Very impressive for his size.

At the same time, he’s a downhill runner that doesn’t dance. That’s what separates him from Jonathan Dwyer. Dwyer wanted to bounce every play. He thought he was faster than what he truly was. Blount doesn’t. He knows he’s relatively slow and usually can’t make it to the edge. So he gets downhill and consistently gets positive yards. Won’t frustrate you as a coach.

That’s a perfect resume for a zone blocking scheme. Read the defenders, not the lineman, find the gap, square your shoulders, and get downfield.

That was the thinking of Howard Mudd, largely considered the father of zone blocking (though many will argue the scheme existed well before his time). As written in Tim Layden’s book Blood, Sweat, and Chalk¸Mudd said, “Let’s cover up their color with our color, and then encourage the ballcarrier to run toward the defense and then go where they aren’t going. Hit ‘em where they ain’t, you could say.”

That’s what LeGarrette Blount does best.

While Blount showed the ability to finish runs and keep his legs churning along with quick feet, he’s not a Jerome Bettis-type of runner. Not a bruiser and doesn’t break many tackles. At best, he had one or two broken tackles in the 60 carries. That might even be a generous figure. His vision puts him above a Shonn Greene esque plodder who only gets what is blocked. Just don’t expect him to run anyone over.

Shane Vereen and Stevan Ridley were clearly better third down options, but Blount may be just a two down back. In three of his four years in the league, he had fewer than five receptions. Just two catches in 2013. One reason why he played less than a quarter of snaps for the entire year.

With little depth, I’d have to think the team still has interest in someone like LaRod Stephens-Howling when he gets fully healthy.

Sneaky value as a kick returner. Dri Archer could be considered the favorite but don’t count Blount out. Mike Tomlin values trust and reliability in the position.

This was a quality signing and one I’m excited about. Le’Veon Bell will still be the workhorse especially given his 3rd down value, but snagging Blount certainly helps eliminate a big drop off when Bell needs to be spelled.