Due to the NFL Draft, we took some time off from breaking down the players signed by the Pittsburgh Steelers during free agency. After exhausting nearly every angle of the draft, we’ll throw our focus back to that. If you missed it last time, my reports on Mike Mitchell and Cam Thomas.

The categories I looked at in the games I broke down.

Position: WILL, SAM, MIKE, ILB (in 3-4 look) Slot (removed from core of formation)

Simple enough, yes? Away we go.

Watched four games of Moats, spread out throughout the year. Attempted to watch a fifth but he was benched the last few weeks of the season. More on that later.

To begin, we’ll talk about his build. The Steelers list him at 6’2 250. But unless he had a growth spurt, he’s really 6’0 as his Combine bio shows.

That gives him deceptively short arms. You’d expect a T-Rex from that build but he has fantastic length for his frame – nearly 34 inches.

Other than that, he’s a squatty looking linebacker whose build doesn’t look especially inspiring. A little Chris Borland like but with much longer arms.

Against New England, he primarily lined up in one of two spots, as I noted above.

Either as the WILL in their 4-3 or as an inside linebacker when the team used an odd front. Pictured in order below. 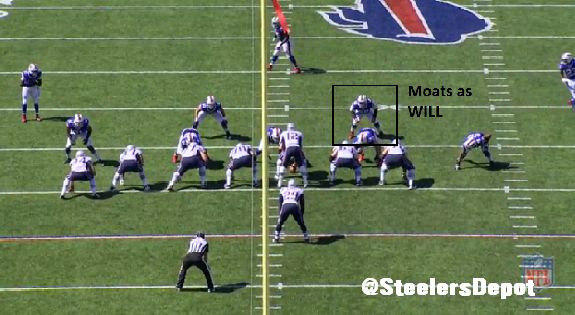 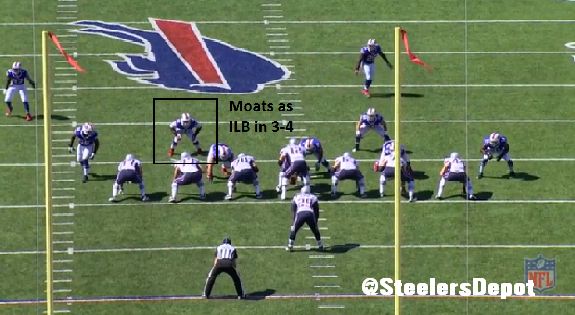 As the low snap count indicates, he wasn’t used often. Off the field in subpackage football and was rotated out by linebacker Nigel Bradham (seen below). 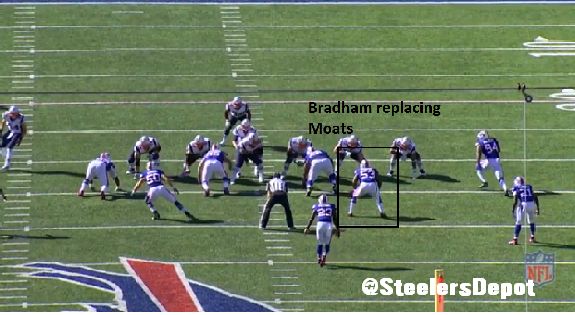 From the few snaps he did log, he wasn’t that impressive. Moats is weak and lacks the upper body strength to set a hard edge when asked. He’s obviously giving 75 pounds to the Patriots’ lineman but was too easily washed and knocked around.

Moats, #52 and working as the WILL in this GIF, gets reverse pancaked by Marcus Cannon.

Screenshot of Sebastian Vollmer putting Moats on his behind. 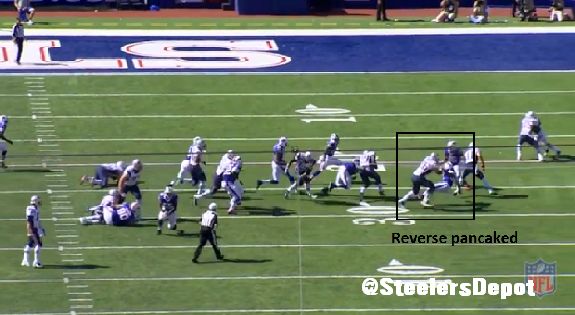 His tackling was inconclusive with one miss. Though his best play came on an open field tackle of Julian Edelman on a swing pass. If he doesn’t make it, Edelman probably scores. Check out all the green he has in front of him. 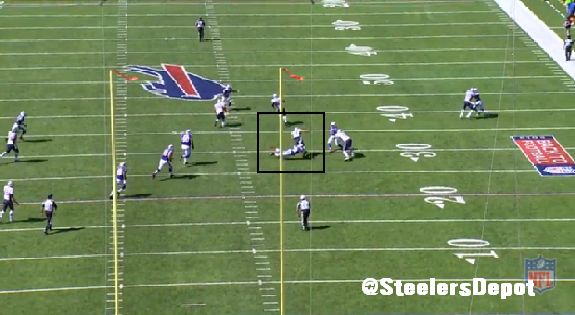 It’s just a solo tackle in the box score but no question it was much more valuable than that.

Moats started the game as the WILL linebacker. But again, when the team went into its subpackage, as they did on the second play of the game, he went to the sidelines.

He did not start the second half even with the team in its base 4-3.

His playing time was severely limited. About eight of those 19 snaps came in goalline situations, one sequence in each half.

Something new I was able to find was his involvement on special teams. Served on the punt coverage unit. Lined up next to short-lived Steeler Jamaal Westerman. 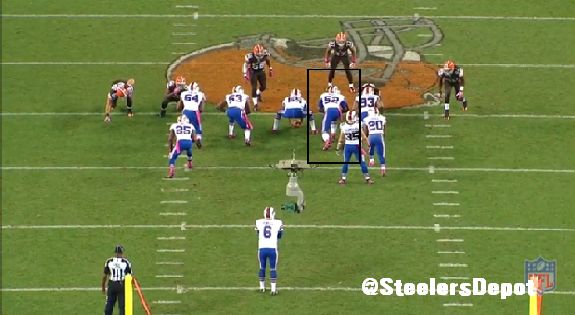 Regarding what he did defensively, it was more of the same. No special, splash plays, but tough to do in limited snaps. Showed some short area quickness. Exhibitedleg drive plus the ability to snap his hips and roll through contact on his tackles.

Did get off this block from the tight end to bring down Willis McGahee for no gain, though it’s worth noting the tight end had to squeeze through the lane and couldn’t position himself properly on his block.

Something else I noticed is how he takes on blocks. Leads with his shoulder too often than staying square. Difficult to anchor against and maintain your gap, but don’t like the technique. Saw it repeatedly including against New England, too. 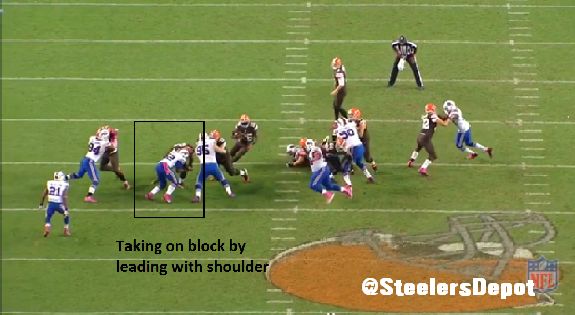 New positions I saw him at. Lined up as L2 on kickoffs. Also in man coverage motioned out with Will Johnson one on snap. 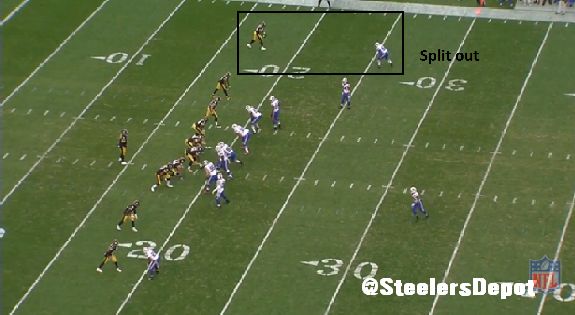 The latter doesn’t mean much but worth noting for bookkeeping purposes.

This was probably the best game of the four. But it came mostly against Mike Adams. Difficult to take much from that. Routinely able to shed Adams, who entered as a tackle-eligible.

With Adams consistently getting himself overextended and on the ground, Moats obviously looks good by comparison. Skews the evaluation a tad. Still, the linebacker showed proper leverage and active hands to work off blockers.

Again, saw him leading with his shoulder to take on blocks. Happens against Johnson who is able to scoop him out of the lane. 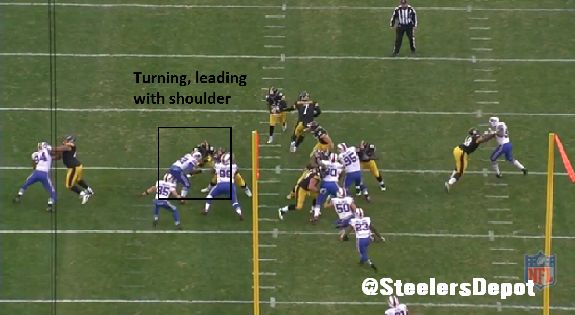 By the mid to late second quarter, Moats was again getting rotated out in favor of Bradham.

Again, times where Moats was removed from the core of the formation and asked to cover the slot. 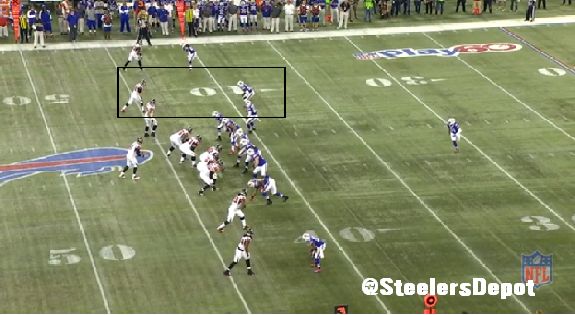 By this point, the Bills had settled into a 4-3, Mario Williams became a full time defensive end, and used significantly less 3-4 looks.

Like usual, he started the first series and saw action on the punt coverage unit early in the game. He appeared to be the signal caller in a young, inexperienced group (Kiko Alonso, Bradham). Something I saw throughout the year.

He did “blitz” but they were merely rushes due to the running back staying in to block. Ineffective pass rusher with little moves.

Did play the largest percentage of snaps in any of the four games I watched but didn’t do much with them. Credited just three tackles and that figure may be generous. Did have a nice chasedown of Jacquizz Rodgers but not much else noteworthy.

What’s interesting is that Moats seemed to have finally been pulled for Nigel Bradham. Moats played regularly through the first three quarters. In the 4th, Bradham came in and Moats didn’t see another snap. Not even on special teams. 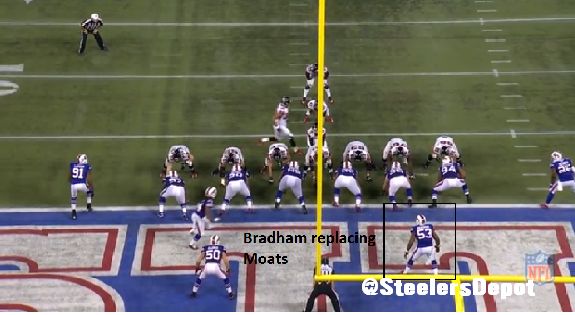 Head coach Doug Marrone made no note of any injury after the game nor was Moats listed on the injury report the following week. He served on the special teams unit in Week 14, playing 11 snaps there. He saw just two plays on defense. Bradham saw 47.

That’s how it went for the rest of the year. In the four weeks I watched, Moats’ snap count never eclipsed 30. In Week 14, Bradham saw 47. In Week 17, he played 53 snaps. The rotation was over. Moats was benched, ostensibly for general ineffectiveness.

In 2013 at least, Moats was not used as an edge rusher or pass rusher. Of course, if you know his backstory, he can play there. Spent his college career as an undersized defensive end at James Madison. But that wasn’t a role he was given last year. Far from it.

To be frank, it’s difficult to obtain a read on the type of talent Moats is. He was used similarly to Vince Williams. Only a few, inconsistent snaps. Like Williams, it’s difficult to develop a consistency and rhythm when you’re constantly rotated out.

The difference for the rotation seem to be for different reasons. Williams, a rookie asked to play a position that asked him to bark out the signals. For Moats, it appears to be a talent deficiency.

On the plus side, as I’ve written, he plays with proper leverage with his long arms. Shows some short-area quickness and semi-active hands. Didn’t get a conclusive look but looks like a decent tackler.

But the glaring negative is a lack of strength. Weak upper body and if he can’t shed, he gets pushed around. Poor technique to take on blocks only hinders the issue. That may be one of the reasons why Moats is getting his first crack at outside linebacker. Let him go back to what is comfortable to him, what he knows best, and keep him away from trying to consistently fight off pulling guards and fullbacks. Not going to work out in the long-term.

Go back to this stat often but it’s one you’ll hear repeated, for good or bad, in post-game press conferences. Splash plays. Moats hasn’t had many the last few seasons.

Zero sacks, forced fumbles, or interceptions in 2013. Ditto for 2012 though he saw even less time on defense. Just 121 snaps for the season.

Of course, Moats won’t be counted on to start. Ideally, he’ll become a core special teams player that can be shuffled around defensively should injuries strike.

That’s essentially what you have to take the move as. A backup who can spot start but shouldn’t be playing long-term. But is his versatility, starting experience, and special teams ability valuable, especially considering the 795K price tag? Of course.

Temper expectations and be happy for the sure tackles he makes on special teams. And you’ll be happy enough with the signing.