Following the conclusion of the 2014 NFL Draft, the Pittsburgh Steelers signed nine additional rookie free agents. Yesterday, we showed you the defense. Today, the offense.

Keep in mind that because these are undrafted free agents, tape can be a little more difficult to find on them and the evaluations a little harder to trust in. Plus, I actually ventured outside of mom’s basement today so I had a little less time.

As with any report, this is not an airtight prediction of how a player will perform. Instead, it’s an educated guess based off of college tape. These players are in the NFL now and will have a chance. That’s all that matters.

These reports will be sorted by my take on the odds of them making the roster. This includes odds for making the practice squad as well. Only three of 15 UDFAs (20%) in 2013 made the roster and all were on the practice squad (Brian Arnfelt, Chris Hubbard, and Alan Baxter). If you assume that percentage holds true for these nine, only one player will make it. So the odds are naturally going to be low.

The Good: Height/weight combination not terrible for the position…athletic and can move…good off the snap…capable of reaching the second level…technically sound, plays with proper pad level and hand placement…balanced, coordinated, and stays on his feet…able to work down the line, scoop/reach block and set his hips…played in a zone blocking scheme…center/guard versatile…three year starter

The Bad: Looks to have average arm length and frame is nothing to get very excited about.,.lacks upper body strength…functions better in space than in a booth…better when attacking from an angle or in space than base blocking…will fall of some blocks at times…can look lost in space…making jump from FCS level

Other: 38 career starts for the Penguins…spent freshman to junior year sat right guard before switching to center as a senior…two-time Missouri Valley Conference First Team….2nd Team All-American by AP in 2013…team’s offensive lineman of the game five times in 2013…team captain senior year at YSU…attended Beaver Falls HS in PA, less than 40 miles from Pittsburgh…ran a 4.97 at his Pro Day, repped 225 25 times…YSU’s OC was Ben Roethlisberger’s OC in college

Bottom Line: Only got to watch one game on Elkins so looking at him through a limited scope. But saw some traits to like and his versatility will endear himself to the coaching staff. Too much competition along the offensive line already to earn a roster spot but there’s a chance he finds a home on the practice squad.

Sequence of Elkins getting shoved into the backfield by a 320 pound DT. Lacks upper body strength to hold the point when asked to base block. Little hard to see but if you expand the photo, you should be able to make it out. 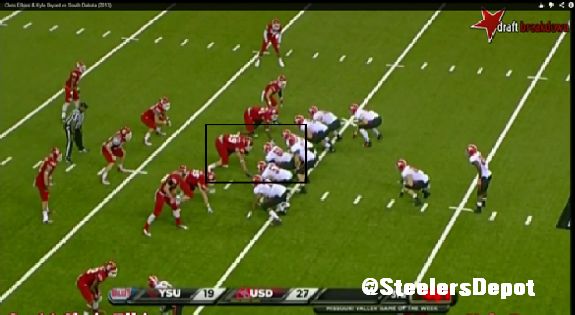 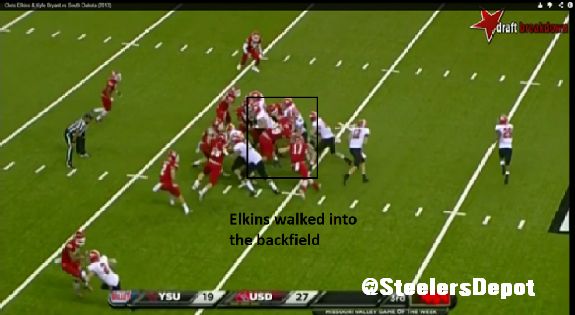 The Bad: Lacks upper body strength to hold POA well…not always capable of sticking to his blocks…decent first step but may be more of a build-up runner…little use on offense and not asked to run many routes, lacks experience…used more as a blocker than receiver…scant production

Other: 2013: 8 receptions, 72 yards 1 TD…Career: 14 receptions, 145 yards, 2 TDs…used mostly as inline blocker…two career blocked punts…ran a 4.7 and jumped 39 inches in the vertical and 10’2” in the board at Indy regional combine… invited to Super Regional Combine in Detroit, suffered minor ankle injury in gauntlet drill…caught 23 passes for 361 yards and three scores senior year of high school

Bottom Line: Waters is a name to keep an eye on. He was severely underused at Missouri and his height wasn’t an asset with the Tigers having L’damian Washington, Marcus Lucas, and Dorial Green-Beckham. Plus athlete who was nearly exclusively used as an in-line “Y” tight end but did give him experience there. Unlikely to make 53 but a perfect practice squad prospect.

The Bad: Struggles in space, a phone booth blocker…not particularly explosive off the ball and can be late out of his stance…exposed in pass protection…waist-bender…struggles to move laterally…lacks versatility, only played one position

Other: 37 career starts, all at right guard…2013 First-Team C-USA selection after being named to its Second Team in 2012…can bench press 415 pounds…came into the program weighing a reported 280 pounds…ran a 5.37 at Pro Day and recorded 25 reps on the bench press…captain during junior and senior seasons in high school…participated in shot put and discus during high school

Bottom Line: Strength and demeanor gives him a chance but not sure if his style is the best fit for an offense trying to implement a zone scheme. Could find a home elsewhere that runs a power scheme, though. I like him, just not as much for a team like the Steelers. 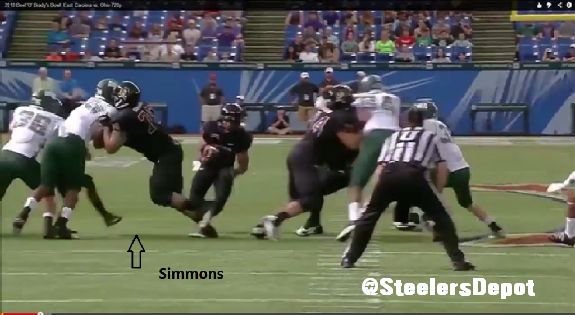 The Good: Not great size but looks to have some length…gets his arms extended…decent athlete with some short-area quickness…shows proper foundation out of his kickslide and makes a conscious effort to keep his butt down…plays with a wide base…tons of experience at both tackle spot, flipped around constantly in-game as the “strong tackle”…solid senior season

The Bad: Shorter and lighter than what you’d like to see…not great laterally and can get beat…too committed to staying in his base sometimes…moments where he will double over in pass protection…grabby in pass protection and must work to keep his hands inside and his lower half pumping…inconsistent in space and difficulty engaging…on the ground too often…ineffective cut blocker…strength is just average, nothing special and fails to generate much of a push in the run game

Other: Two year starter…claims to have not allowed a sack senior season…2013 C-USA Honorable Mention…missed final game of senior year with ankle injury…ran a 5.02 40 at Pro Day and had 22 reps on the bench press…didn’t start playing football until freshman year of high school

Bottom Line: Ike is interesting in that he played both tackle spots in his career and shuffled from one tackle to the other, even during the same drive. In interviews, Ike said he played “strong tackle” but other media reports said he was moved to “quick tackle.” Ike mainly played as the weakside tackle in the two games I watched. Regardless, he has the experience kicksliding from either spot. No small feat.

Beyond that, there isn’t a lot about his game I can get onboard with. Perhaps the athleticism he has will warrant consideration on the practice squad but it doesn’t seem terribly likely at this point.

Ike getting overextended in pass protection. 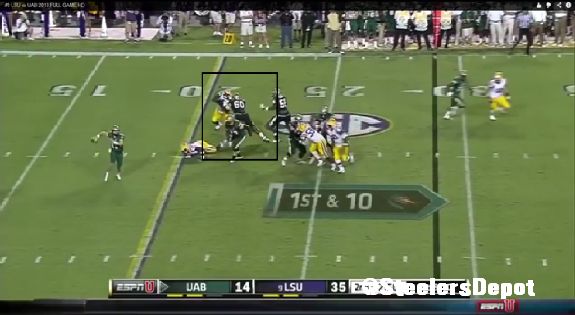 The Bad: Accuracy is erratic…struggles with ball placement down the field…accuracy severely drops when asked to move and reset in the pocket…passes tend to sail…plays with narrow base and hurts accuracy and ability to drive the football…feels a ghost rush and is too quick to leave the pocket…doesn’t go through his progressions and will hit his checkdown too quickly…release not always compact and arm angle will drop to three-quarters…forces some throws…medical concerns, three knee surgeries…older than typical prospect

Other: Spent one year as the full-time Bearcats starter and spot-started in 2012…threw for over 3300 yards and 22 TDs while completing 66.3% of his passes in 2013…eight career rushing touchdowns…ran a 4.63 at his Pro Day…tore ACL in fall of 2009 as member of scout team…tore meniscus in same knee spring 2010…had cleanup surgery in 2011…granted sixth year of eligibility by NCAA…participated in NFLPA game…three year captain in high school..34-2 record…passed for over 2000 yards and ran foranother 561 senior year

Bottom Line: Kay has some of the physical tools you look for but his negatives are simply too much to ignore. Perhaps you’ll get the random, spring report of Kay looking good the way John Parker Wilson did, but he’s little more than a camp body.

Here’s Kay dropping his eyes and absorbing a sack against North Carolina despite having two open receivers on underneath crossing routes. 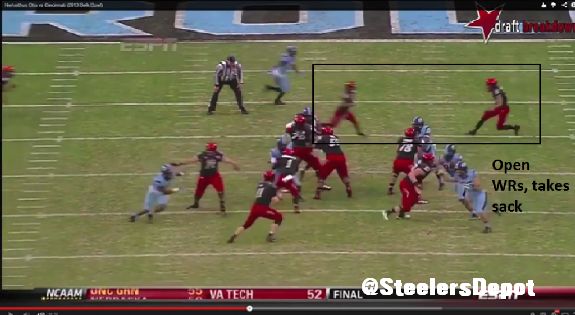 Another shot of his poor, narrow base that made it difficult to drive this throw despite his plus arm. Throw is late and ultimately intercepted. 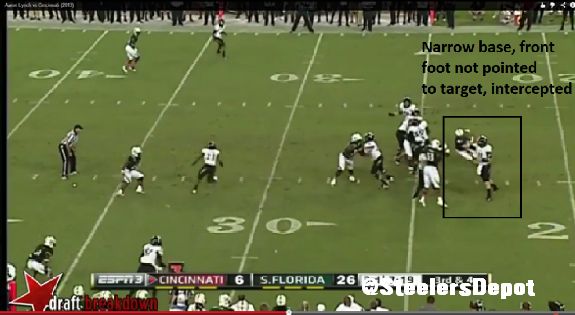