Following the conclusion of the 2014 NFL Draft, the Pittsburgh Steelers signed nine additional rookie free agents. We’ll break down the defensive signings today followed by the offensive players on Saturday.

Keep in mind that because these are undrafted free agents, tape can be a little more difficult to find on them and the evaluations a little harder to trust in. Plus, I actually ventured outside of mom’s basement today so I had a little less time.

As with any report, this is not an airtight prediction of how a player will perform. Instead, it’s an educated guess based off of college tape. These players are in the NFL now and will have a chance. That’s all that matters.

These reports will be sorted by my take on the odds of them making the roster. This includes odds for making the practice squad as well. Only three of 15 UDFAs (20%) in 2013 made the roster and all were on the practice squad (Brian Arnfelt, Chris Hubbard, and Alan Baxter). If you assume that percentage holds true for these nine, only one player will make it. So the odds are naturally going to be low.

The Good: Good athlete for his size, shows some fluidity…plays with proper pad level and gets low…shows active hands and can shed blocks…capable of penetrating and disrupting…good effort and runs to the ball…strength isn’t great but can hold POA with aid of his technique…versatile…productive senior season…good starting experience…played in a 30 front and a complicated, exotic looking defense, similar concepts to the Steelers

The Bad: Undersized and short…offers little as a pass rusher, usually off the field on passing downs…could work to get stronger…lacks leg drive in his bull rush…just an average first step…rotational lineman and got the benefit of playing fresh

Other: 29 career starts…2013: 41 tackles, 12 TFL 4 sacks…22 TFL and 8 sacks in Louisville career…ran a 5.13 40, jumped 27.5 in the vert at Pro Day…experience at both end spots and one tech…two star prospect coming out of high school…earned a masters in criminal justice…last name pronounced Fi-lawn with a long “i”

Bottom Line: Probably my favorite UDFA by the Steelers. Got overshadowed by guys like Marcus Smith, Preston Brown, and Lorenzo Mauldin at Louisville but Philon put up similar numbers. Had the same number of TFL as Mauldin and only .5 less than Brown, who was selected in the third round by Buffalo.

Has an intriguing mix of athleticism and technique. Cardinal used similar concepts with exotic stunts and an amoeba defense on third downs. With an open competition along the defensive line, Philon is someone to keep an eye on. Could make some noise.

The Bad: Better athlete than football player…poor hand fighter who lacks arsenal…too often stuck to his blocks in both phases…inactive hands…lacks upper body strength and struggled to anchor against the run…even had trouble holding point against tight ends…lacks balance and on the ground far too much…trouble dipping the edge, may be strength and flexibility issue…exposes ribs too much when he tries to swim, similar to Clowney…appeared to lack experience dropping into coverage…attempting to make the jump from D2…numbers waned in junior and senior seasons

Bottom Line: I did not get a real good look at Jones. Admittedly, my evaluation of him is the murkiest of them all. Only tape I watched from his senior year was a short clip during the NFLPA Bowl. Shepherd tape, other than highlights, is not easy to find.

Still, I was disappointed in what I saw. As I noted, looked more like an athlete than football player and looks like he needs a lot of coaching and time in the weight room to bulk up. Has some very raw tools to work with and would benefit the most by spending a season or two on the practice squad.

Screen grab of Jones getting shoved up the arc and taken out of the play in the NFLPA Bowl Game. 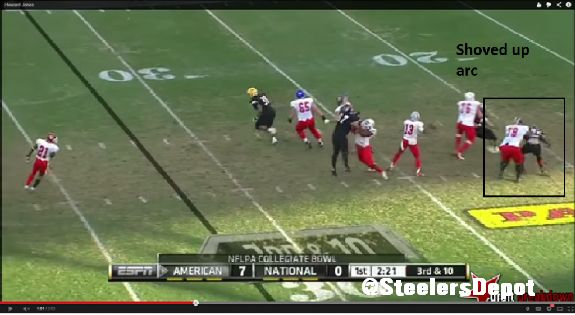 The Good: Above average size and bulk…eats up space as a two-gapper…shows some strength…occasionally shows glimpses at being able to stack and shed…awareness and gets his hands up to bat throws down…tiny ability to stack positive plays…little bit of versatility…lots of starting experience

The Bad: Very limited athlete and lumbers around…slow off the ball…gets overextended at the point of attack and can get pushed around…too often gets stuck on his blocks…slows hands…offers nothing as a pass rusher and usually off the field on 3rd downs…puts his hands up too early as a rusher and exposes his chest, letting lineman into his pads…poor backfield vision and loses track of the play…rotational lineman…very little production

Bottom Line: Size is his defining trait and that isn’t a compliment. Slight but overall minimal value as a two-gapper. 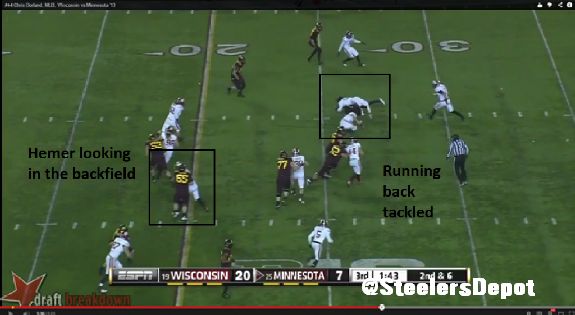 The Good: Offers some size you’re looking for in a five tech…gets his arms extended…hard worker and tries to hand fight as a pass rusher…will occasionally disrupt in the backfield…will run to the football…versatile along defensive line…good bloodlines…fairly productive

Other: 2013: 51 tackles 12.5 TFL, 4 sacks…2012: 19 tackles, 5 TFL, 6 sacks …All Pac-12 Honorable Mention in 2013…played every technique along the defensive line…ran a 5.21 and repped 29 times at Pro Day…80 tackles and 12 sacks as a senior in high school…played quarterback from 7th to 10th grade…brother played quarterback at Northwestern…two stepbrothers played football…born in St. Albans, England

Bottom Line: More name value than ability, I came away disappointed in Mauro’s play. There are spots up for grab along the defensive line but I don’t see Mauro snagging one of them. Based on the tape I watched, the odds aren’t even good he makes the practice squad.

Here’s Mauro getting pushed way downfield by a 275 pound redshirt freshman left tackle. Was reverse pancaked by him twice. 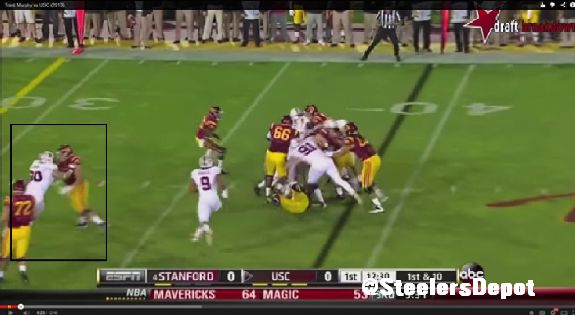