On the Tuesday edition of “NFL Total Access” analysts Solomon Wilcots and Heath Evans finally got around to grading the 2014 drafts of the four AFC North teams and when it came time to grade the Pittsburgh Steelers, Evans didn’t sound over impressed.

“It breaks my heart because I love me some Mike Tomlin and some Dick LeBeau, but it’s a C-plus, because it’s kind of a wait and see,” said Evans. “I mean [Ryan] Shazier, the linebacker from Ohio State, listen, he’s pretty with his shirt off. He’s fast and you can get excited about him, but I think Dick LeBeau is going to have to do a masterful job of putting him in places to make plays. I worry about him being physical enough to be a Pittsburgh Steeler linebacker. We’ll see. This guy has a lot of talent.”

Evans decided to skip over the selection of defensive end Stephon Tuitt. Instead, he moved on and highlighted his concerns abut the Steelers third-round pick, running back Dri Archer.

“Dri Archer, a running back, this guy has 100-plus catches in his college career. 1,200-plus yards. So this is another guy they’re going to try to fit and mold,” said Evans. “You’ve got [LeGarrette] Blount. You got my other guy there, Le’Veon Bell, so he’s going to fit into another niche. So those two picks could be  monstrous picks, but it’s kind of a wait and see for both of those guys with me.”

Sure, it’s a wait and see with every draft pick, but at least in the case of the Steelers first three picks, they’re all likely to contribute heavily during their rookie season. While Archer might not get a ton of snaps on offense in 2014, he will more than likely return kickoffs and punts, so essentially he’s a starter in the eyes of Steelers general manager Kevin Colbert. Anything that he provides above and beyond that is gravy.

In the case of Shazier, at least he should be able to stay on the field for all three downs once he completely learns the defense. He was easily the top-rated inside linebacker in this year’s draft class.

It was also inexcusable for Evans not to pay any lip service to Tuitt, in my opinion.

So what kind of grades did the other three AFC teams receive from Evans and Wilcots? The graphic below should answer that question. 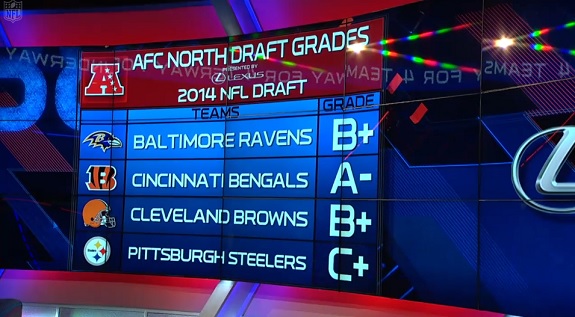