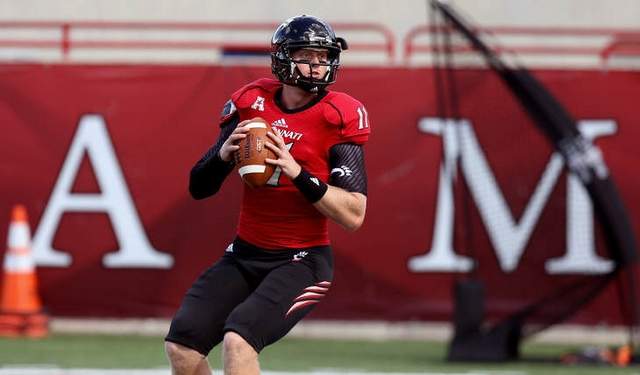 Will Pittsburgh Steelers second-year quarterback Landry Jones be pushed hard from behind this year in training camp? If so, who will be doing that pushing?

The Steelers rookie mini camp got under way on Friday and while there’s reportedly three quarterbacks taking part in the practices, only one is currently under contract and that’s Brendon Kay, who was signed as an undrafted free agent out of Cincinnati.

According to Mark Kaboly of the Pittsburgh Tribune-Review, Kay showed good accuracy during the first practice session.

Kay being reported as being accurate with his throws probably shouldn’t be considered big news, however, as he completed 66.2% of his 393 pass attempts last season with only 12 interceptions. Rutgers head coach Kyle Flood even talked about Kay’s accuracy last November prior to his team playing the Bearcats.

“I think completion percentage is indicative of two things: the types of passes they throw and the quality of the decisions that a quarterback makes,” Flood said, according to NJ.com. “I think they do a very good job. Brendon is an excellent decision maker and within their scheme, they ask him to do things that he’s really good at.”

Scouting reports on Kay indicate that he has “good” arm strength and gets the football out fast. I should note, however, that other reports state that the Bearcats passing attack included quite a bit of screens, but being as I haven’t seen a lot of tape of them from last season, I can’t confirm or deny whether or not that’s true. In his highlight videos, however, you will see him air it out quite a few times.

The Steelers normally like to carry four quarterbacks on their roster during the early stages of training camp and the preseason, and while the early reports on Kay seem to be positive, he will have to show a lot more over the course of the summer in order to put himself into position to knock Jones, who was drafted in the fourth-round last year, off the roster.

Jones didn’t impress last year during the preseason, so this season he will certainly need to show big progress in order to prove that he has a future with the Steelers. The Jones versus Kay argument should be a good one heading into training camp assuming the Cincinnati product is still on the roster at that time.