– Gets his arms extended

– Does well to work his way down the line vs zone schemes, disruptive in the backfield

– Tremendous effort, one of the best motors I’ve seen in this class

– High football IQ, repeatedly snuffed out plays and gets his hands up to knock passes down

– Versatile, played all spots along the defensive line

– Struggles with his leverage because of height, must play with better pad level

– Leads him to getting washed, most evident versus power schemes

– Issue compounded by average burst off the line

– Some trouble staying square to his block, leads with his shoulder

– Broke bone in foot working out following senior year, missed Senior Bowl and did not work at the Combine

Like I wrote in my scouting report on EJ Gaines, there are usually certain traits you first focus on when looking at a position. For corners, it’s speed and ability to play the ball. For defensive lineman, it’s about their strength, hands, and athleticism.

For Hart, I won’t start with those traits. Because it’s his motor that sticks out the most. Incredibly high-effort individual whose attitude will be infectious in an NFL locker room. Doesn’t quit on any play.

Sees the screen and despite falling down, quickly gets back up and helps chip in on the tackle. Hart is the left end in the GIF below, wearing #66.

The first clip is one of my favorite from Hart in the three games I watched. That’s him chasing down Brandin Cooks, one of the quickest-twitch players in this draft, from behind on a screen. Won’t see many defensive ends make that play.

In the second clip, there’s no compelling reason for Hart to track the receiver down. A lot of players would have taken the play off and no one would bat an eye. Maybe I’m indulging here and towing the line of objectivity, but I think for Hart, it’s a bit personal. It’s his field and he’s not going to let you run around on it. A trait that should be admired.

Bouncing off that, he has a great football IQ. Reads and reacts to plays quickly. Blew up screen after screen.

Hart struggles more in confined spaces but as those clips shows, he’s an athlete in the open field. Fluid and runs well. If his Pro Day were to be believed, a 4.8 result for his frame is excellent.

Like his upper body strength and it translates into an effective bull rush. Again, Hart the left end.

The clips may be misleading in the sense Hart was not strictly a left end. Moved all about Oregon’s defense. Originally a defensive tackle before kicking out. Saw considerable time at both end spots and some work at one tech. Also stood up and dropped into coverage a few times over the course of the three games. Worked out at linebacker by the Colts at his Pro Day. 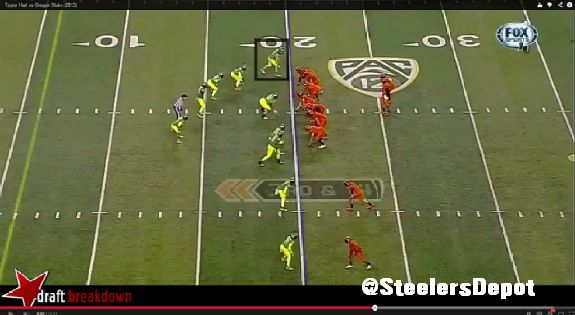 Does have his flaws. Chiefly, with leverage. At 6’6, he has trouble getting his butt down. Can get washed and run out of the play. Know it isn’t a strength issues because he’s shown that on numerous plays. It’s a problem with his technique.

At right end in the below clip. Gets stuck, knocked back, and the runner sprints for a large gain.

Has difficulty staying square to his blocks. Can get turned and washed. Right end below.

As I noted, that issue is compounded by him not having a great first step. Won’t always get into the offensive lineman’s pads off the ball, not allowing himself to gain control.

I wrote this on Twitter and I’ll say it again. Hart reminds me a lot of Brett Keisel. Good, but not great, athletes who have quality strength and play like every snap is their last. If Keisel’s career is any indication, someone I wouldn’t mind having on my side.

Games Watched: at Virginia, vs Tennessee, vs Oregon St