The Pittsburgh Steelers brought Oregon State defensive end Scott Crichton in for a pre draft visit a few weeks ago and they’re likely looking at him as an outside linebacker prospect. Here is a quick and dirty break down of his 7.5 sacks from last season along with a few more thoughts I have on him after watching several games.

Crichton has a little inside-out move here that gains him the edge against Hawaii for his first sack of the season. There’s little bit of bend at the end, but not much. If you watch closely, he beats the tackle off the snap.

Crichton gets credited for a half sack here, but allows himself to get carried all the way around the pocket by the tackle. Look how bad of footwork and balance the tackle has here. Yes, it’s a half sack, but not an impressive one.

Nice use of the hands here by Crichton for this sack against Arizona State. The spin back inside ensures he gets the sack. Notice this is on the right side of the line as he can play both sides.

Nice use of the arms again here and he unsticks quickly. However, while he gets off the ball quickly, notice that the tackle is still in his stance with the football halfway back to the quarterback. 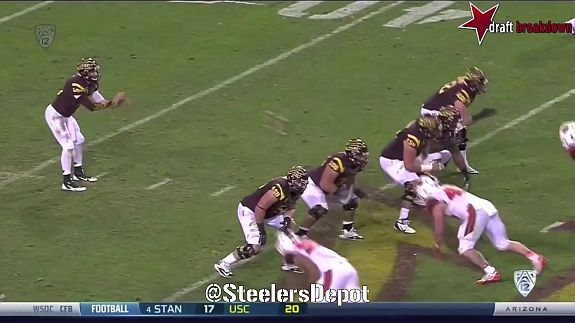 Even more good use of the hands here by Crichton even though he’s the last one on both sides of the football out of his stance. He still manages to make the left tackle look silly and causes a fumble to boot.

Nice fake to the outside here allows Crichton to easily cross the face of the Stanford right tackle and split the double team. He humbles the guard to his knees with power and gets the easy sack. Hands up right off the snap.

Uncontested off the right edge and the USC wide receiver that is lined up in the backfield wants no part of Crichton. This was ruled as a team sack and intentional grounding in the play by play but Crichton was credited with the stat. Those uniforms are hideous.

That inside-out move again causes the Boise State right tackle to flat back and lunge and Crichton swims him for the sack fumble.

While he was credited with 7.5 sacks, I really see only six. I really like Crichton and think he has upside as an outside linebacker. He doesn’t have much bend to him, however, but perhaps playing at around 260-265 at the next level will help with that.

Crichton plays the run well, but will have to get used to dropping and rushing from a standup position at the next level. I like his hand use and how he sets up his moves.

After watching a lot of tape of Crichton, I’m not so sure he’s a second round prospect. If he slides to round three, however, he will be tough for the Steelers to pass up.