A Pittsburgh Steelers player by player recap, grouped by position, reviewing the 2013 season. Our first look at the secondary starting with the cornerbacks.

Ike Taylor: Taylor truly did not get many mentions in my game notes. Normally, like an offensive lineman, that would mean he had a good season. That he did his job. Not the case with Ike. By most accounts and metrics, Taylor had his worst year in quite some time. At times, it could have been even worse. Week 2, he falls down working against A.J. Green. Had Ziggy Hood not gotten pressure on Andy Dalton, it’s likely an easy six.

34 in May, Taylor’s time as a Steeler has been questioned. Some have tossed around the idea of moving him to safety. By the end of the year, Taylor was playing a side of the field instead of shadowing the opposing #1 receiver as he normally has done.

It’s obvious Taylor is heading towards the twilight of his career. Father Time doesn’t lose. When you see a cornerback have difficulty chasing down Ryan Tannehill from behind, it’s cause for concern. His greatest asset has been his speed and that only lasts so long.

But there are qualifiers that need to be considered.

1. The scheme plays a role. In Cover 3, cornerbacks allow underneath throws. Offenses can nickel and dime their way down the field on curls. As a corner, the goal is not to allow anything over your head.

2. Ryan Clark’s struggles. He was supposed to be the safety net over the top. It’s clear he gambled way too much and was the cause for many of the “splash” plays. Danny Amendola’s big catch comes to mind. Ike tries to pass him off to Clark but he bites on an underneath crosser instead. Makes Ike look bad on the surface level but in reality, it isn’t his fault.

3. Covering #1 receivers for a majority of the season. It’s no easy task to match up against Calvin Johnson, Brandon Marshall, and Josh Gordon. Tall task for anybody and valleys are to be expected as often as mountains.

Even though he often “shadowed” a receiver, there wasn’t a lot of man coverage. If he’s dropping into the deep third and the receiver is running a drag, Ike doesn’t assume any responsibility for the catch. Advanced metrics can account for this but simply looking at the receptions for a receiver is misleading.

Taylor’s tackling was sloppier this season. Sometimes, his technique waned. He wouldn’t bring his arms and wrap up. 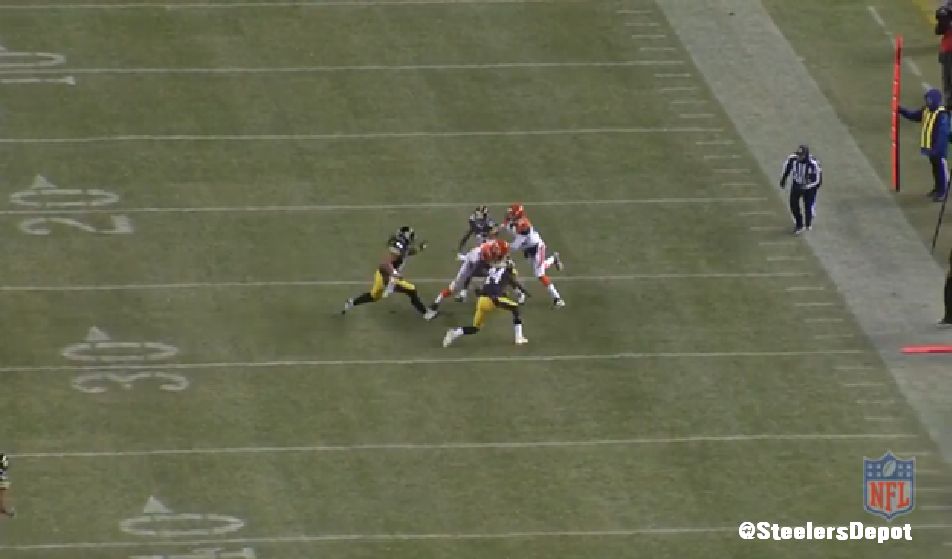 He did atone for it with a key tackle in the open field the play before the Steelers’ 4th quarter fumble recovery against Green Bay. Forced the Packers into a 3rd and long that led to the turnover. 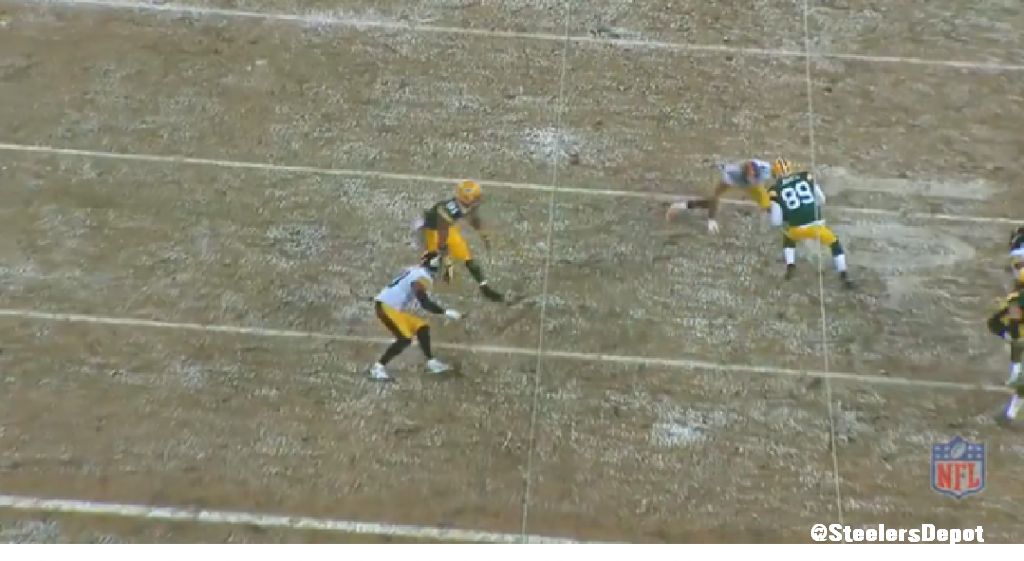 Also showed value on special teams getting a lot of work as a jammer on punt returns.

Taylor was fourth on the team in snaps and led all cornerbacks with 1069. His three pass interferences was most on the team but given the snaps, not an alarming figure.

There are elements to him that can’t be quantified. He was one of the best work ethics on the team. Each year, he takes teammates to train in Florida with Tom Shaw. And he has that feisty, competitive nature to embrace the challenge of facing the best receiver each week.

Seven million is a tad pricey but the chances of him being outright released don’t seem likely. Cornerback would be too shallow for a team that isn’t big players in free agency or in the draft (only two cornerbacks have been taken in the first round since 1970). Perhaps a small extension will get worked out to lower his 2014 cap hit but he’ll likely remain with the team for at least another season. Currently, he is set to become a free agent after 2014.

Cortez Allen: Allen faced a roadblock before the regular season even began, undergoing knee surgery that held him out of most of training camp. He returned for week one but missed the next two games with an ankle injury.

He returned to start against the Minnesota Vikings but the 0-4 start caused the team to shake up the depth chart, sending Allen to nickel packages.

Again the Vikings, Greg Jennings got Allen to open his hips to the sideline, responding with an inside breaking route for an easy score. 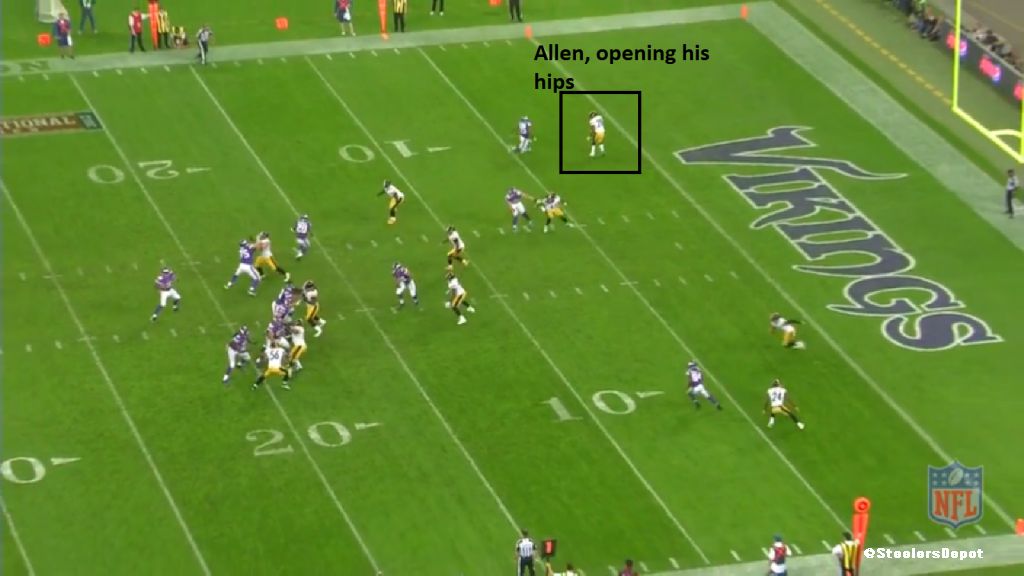 He would not regain his starting role until Week 14 against the Miami Dolphins. But with the heavy amount of subpackages, his playing time was not severely reduced. On the season, he still played nearly two-thirds of the snaps (719 of 1093).

This is beginning to sound a bit repetitive but as the season went on, Allen progressed. Getting into a routine after missing the beginning of the season undoubtedly proved to be a benefit.

Loved the way he used the sideline to his advantage working against AJ Green in Week 15. Presses him to the boundary and doesn’t allow separation. 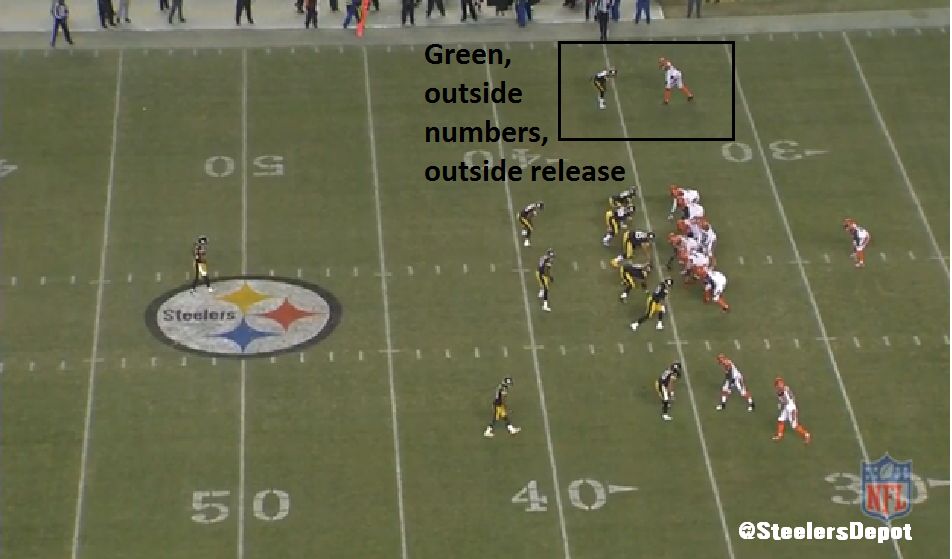 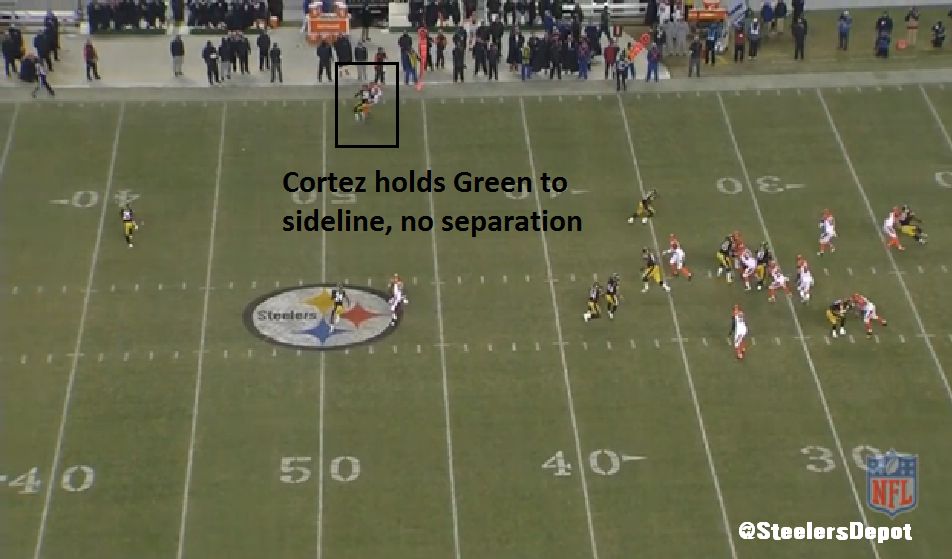 His length and leaping ability allows him to high point passes. Knocks this one away against Mike Wallace in Week 14. 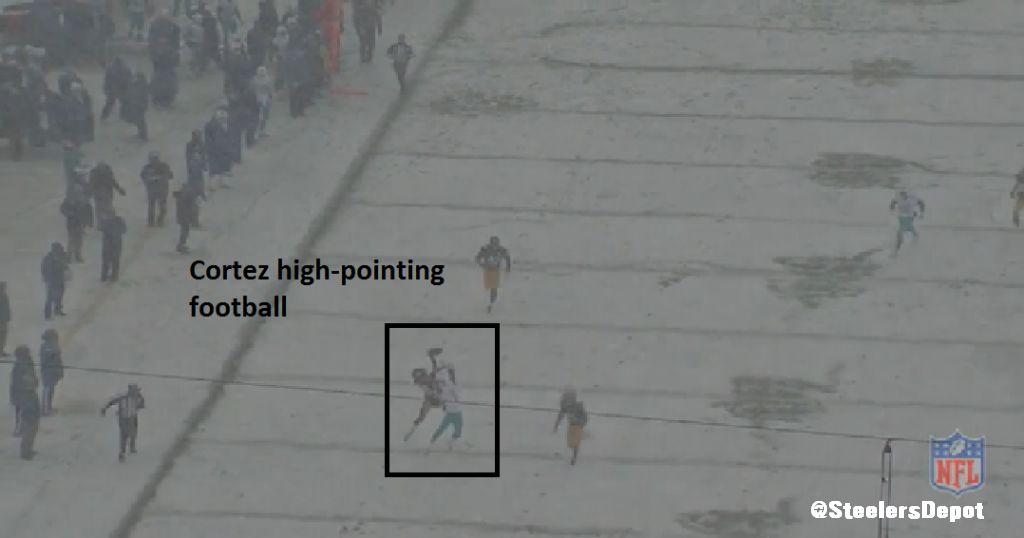 And he broke up a pass in the end zone on the Green Bay Packers’ second drive the following week.

Sometimes taller cornerbacks are stiff and not the best athletes. Not the case with Allen.

As with the rest of the secondary, do need to see more splash plays from him. Just two interceptions, one a gift via Matt Flynn, and no forced fumbles. Allen let a lame duck from Brandon Weeden bounce right off his chest in the final week of the season. Play he has to make.

Allen was blitzed twelve times in 2013. 11 of those came from the nickel.

He was an asset on special teams. Saw action as a jammer and a contain man on kickoffs. Mike Tomlin will always be the Steeler remembered in the Jacoby Jones incident, but don’t’ forget the hustle and angle Allen took to make the tackle. He was playing L1 and on the other side of the field when Jones began his return.

The Citadel product is under contract for just one more season. He’s cheap, sill in the last year of his rookie deal, and will count less than 750K against the cap.

William Gay: Gay is like a third Baldwin brother. Easy to ignore and the butt of everyone’s joke when he is talked about. The stigma of him being a below average cornerback has been something he’s never been able to shake. Gay never has, and at this point certainly never will be, be an all-star but his presence was extremely valuable in 2013.

Gay is a great source of security. A player that has been the #2 corner before. So when Allen went down, Gay stepped in and held the job for most of the season. Then he moved back to playing in the nickel, arguably the toughest spot to play from an assignment standpoint. Need help on special teams? Not a problem. Need a guy to sacrifice his body against the run? He’s your guy.

Most of my notes on Gay reflected not what he did in coverage but his willingness to play the run.

Showed this .gif for Jarvis Jones before, but here’s Gay sealing the edge and forcing Matt Forte to the inside.

In the screen game, he sheds the block from the lineman to make the tackle on Ray Rice. 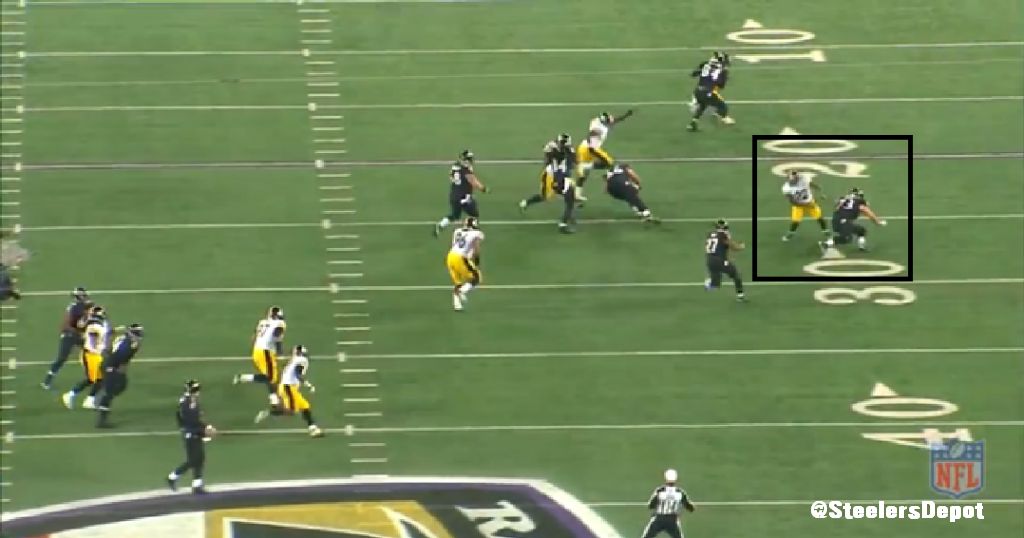 There was the occasional blip, see Greg Jennings’ 70 yard TD where Gay was one of multiple players to take a bad angle, but on the whole, furthered his argument as being a terrific run defender.

In this defense, all 11 on the field must be willing and competent against the run.

If any player has the potential to move to safety, it’s Gay and not Ike Taylor. By my count, Gay had at least three snaps at free safety on the year, including once against Cleveland Week 17. 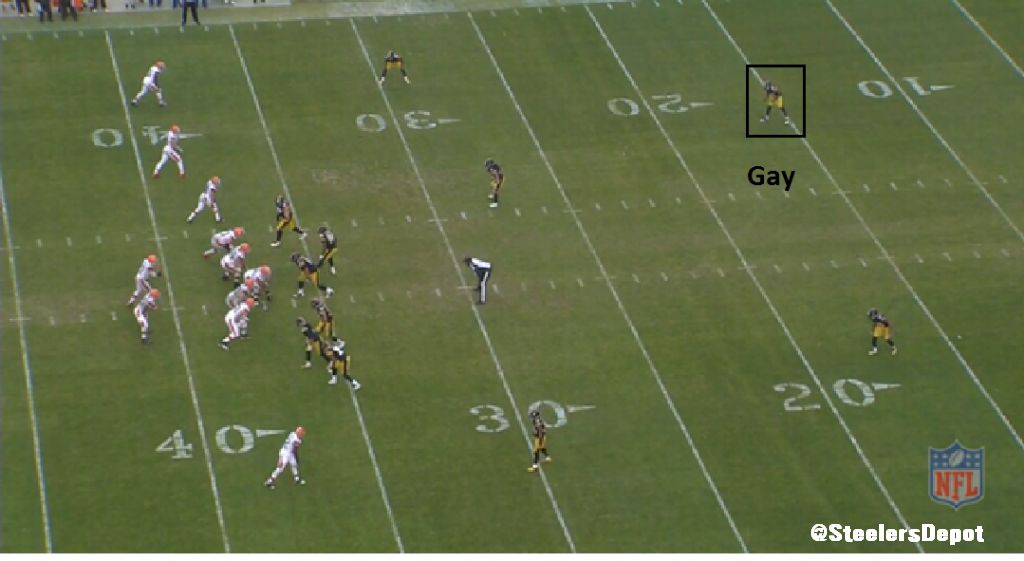 He finished 5th on the team in snaps with 934. He’s under contract for the next two seasons at a cheap 1.5 million.

Antwon Blake: Blake only logged two snaps on defense all season but proved to be a valuable special teamer a la Sean Morey or Chidi Iwuoma. He was the team’s top gunner and at times, forced punt units to double-team him. Blake will never make an impact on defense but could carve out a niche as a gunner as many have done before him. Harder today than in years past but still possible.

Cutis Brown: He saw just one snap on defense. Blake played over him which tells you all you need to know about what the team thinks of him. The former Longhorn’s season was cut short after suffering a torn ACL covering a punt late November.

Brown has been a bust. Unlikely he’ll ever play another down again for the Steelers. Perhaps he lands on injured reserve early in training camp and spends his final year there but nothing more.

Isaiah Green: He made noise making the team out of camp after starting as a virtual unknown. But he failed to make a tackle in his three appearances and ended up on the practice squad by season’s end. He signed a futures deal with the team and will receive another shot in camp.

Devin Smith: Smith made a few plays in the preseason but spent the year on the practice squad. The former Badger also got a futures deal and will try to at least keep his spot on the eight man roster in 2014.