A Pittsburgh Steelers player by player recap, grouped by position, reviewing the 2013 season. Today, a look at the Steelers’ wide receiver group.

Antonio Brown: It’s safe to say nobody is regretting the Santonio Holmes trade anymore. Brown, the team’s 2013 MVP, became a legitimate #1 wide receiver. He hauled in 110 catches for 1499 yards, both numbers good enough for second in the league, and caught eight touchdowns. He also tied for fourth in punt return average (12.8) with one score.

Brown may not be a 4.4 type of receiver but you’d be hard pressed to find a receiver that is more dangerous in space. As former wide receiver’s coach Scottie Montgomery would always say, he’s “quick to the tuck” almost immedaitely reaching top speed after the catch.

Todd Haley made good use of his skill set with a steady diet of bubble or smoke screens to him and rub routes (slant/flat and mesh) to give him a step on defensive backs.

He’s a fine route runner that gets out of his breaks quickly and has a reliable pair of hands.

By almost all accounts, Brown finds a good balance between being a humble, hard worker yet maintaining the chip on the shoulder he has had since being the undersized 6th round pick from a pass happy MAC school.

Although he’s a willing run blocker, that isn’t his strong suit. When the team employed Heavy sets with just one receiver, Jerricho Cotchery was typically the player sent out.

The Steelers hit a home run by signing to him what now is a dirt-cheap deal for a player of Brown’s caliber (6 years/43 million). Rejoice, Steeler Nation.

Emmanuel Sanders: Despite setting career highs across the board as the new #2 wide receiver, Sanders received a lot of unfair criticism from fans. It’s a season highlighted by a drop on the two point conversion attempt that would have tied the game against the Baltimore Ravens. A catch he had to make but he was given the label of not having good hands, something the numbers do not support.

According to this chart, Sanders’ drop percentage (2.7) was very comparable to Heath Miller and Jerricho Cotchery (both at 2.6) and better than Antonio Brown’s (4.2).

Sanders is only 5’11 but plays with a big catch radius, something noted in the very first week of the year on this grab. 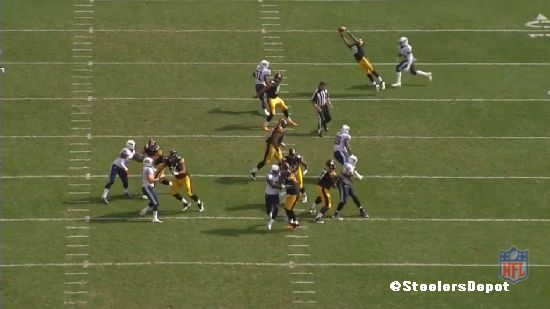 Finally healthy throughout the offseason, he would have had an even bigger start to the season (12 catches for 135 yards in the first two weeks) had Ben Roethlisberger not overthrown him twice. Once for what would have been a big gain against the Tennessee Titans and again versus the Chicago Bears that would have gone for six.

He’s not as dangerous in the open field as AB but Sanders is still a threat and racked up a lot of YAC.

He’s also the second best run blocking receiver on the team. He had his miscues (letting the safety beat him inside that resulted in a TFL against Cincinnati) but did a good job on his crackback blocks and blocking downfield. Some examples, the last being a downfield block that sprung Brown for a TD against the Detroit Lions. 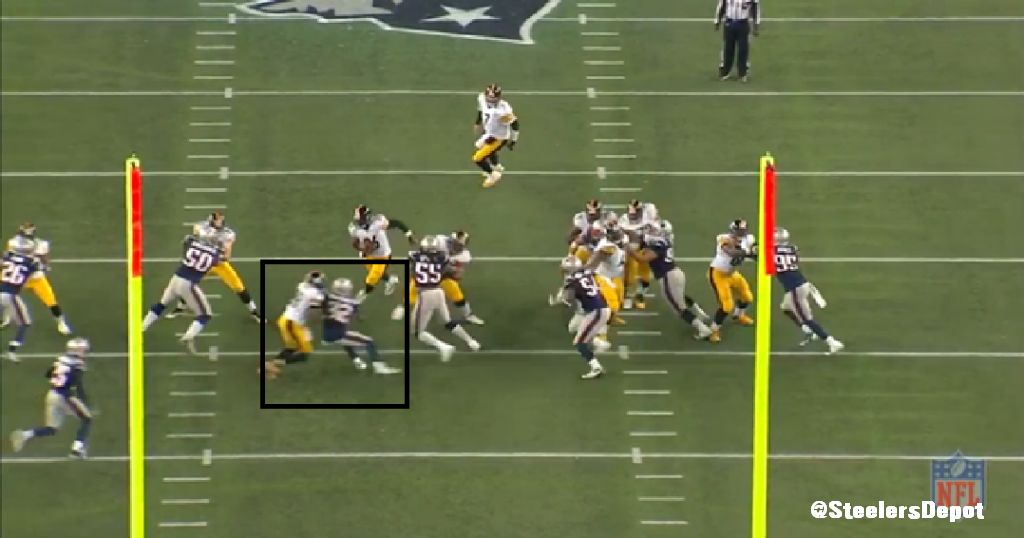 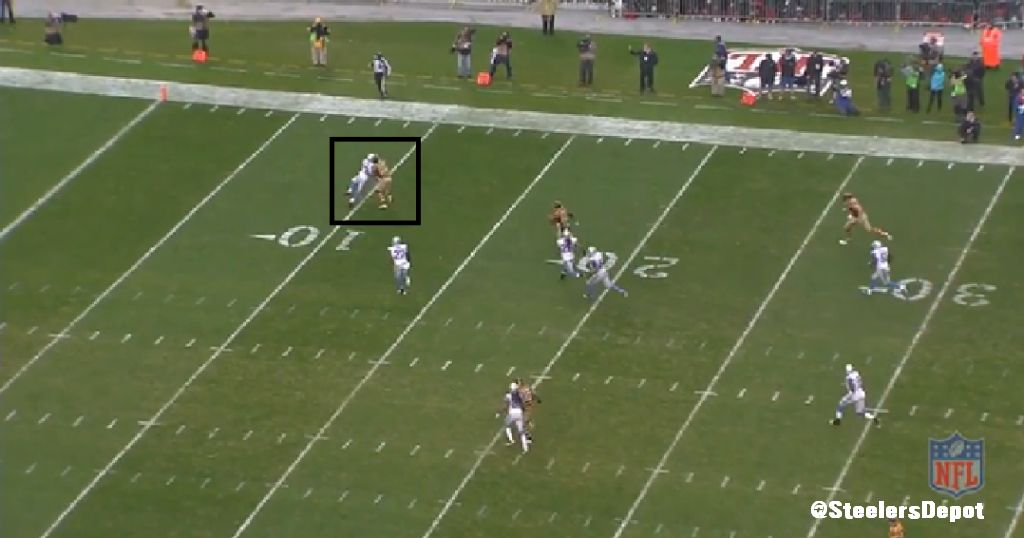 One gripe I did have was at times, a lack of football IQ. There were multiple instances of him moving instead of sitting down against zone coverage. It led to an interception against the Minnesota Vikings and an incompletion against Baltimore. 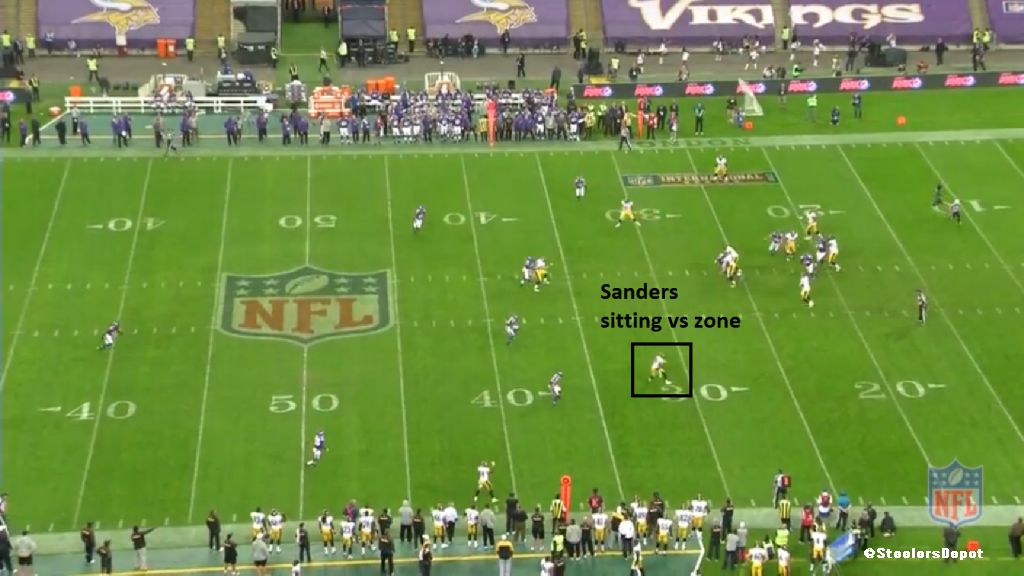 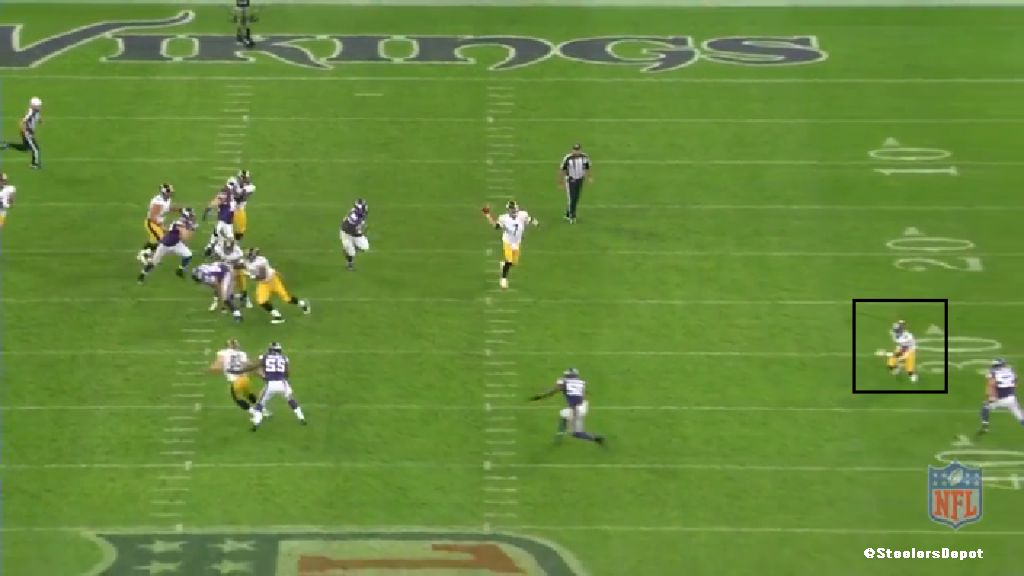 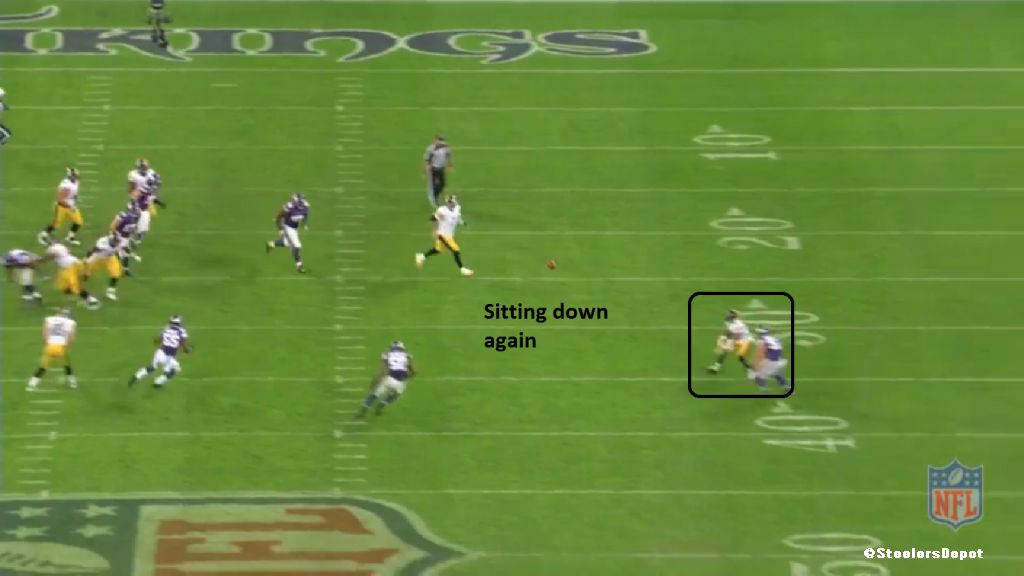 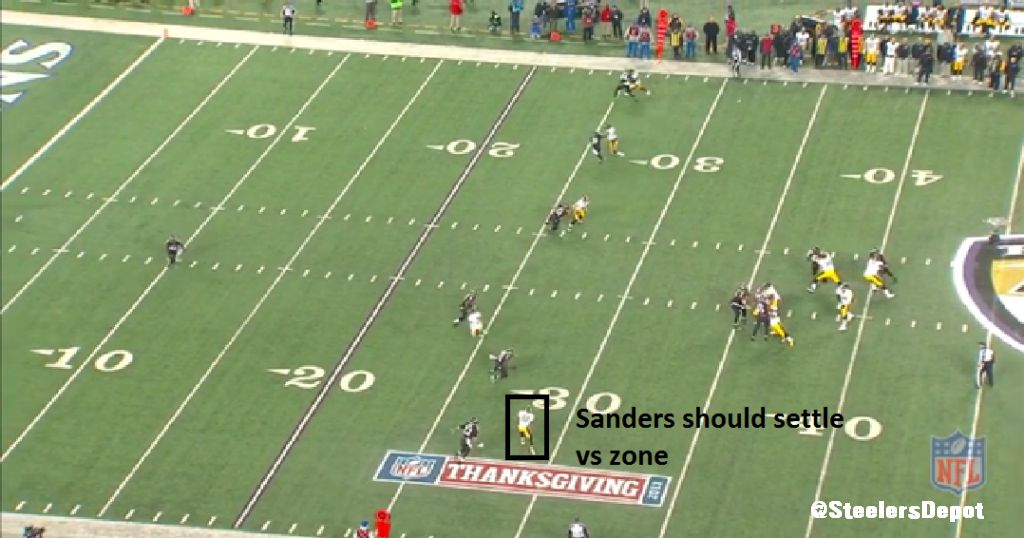 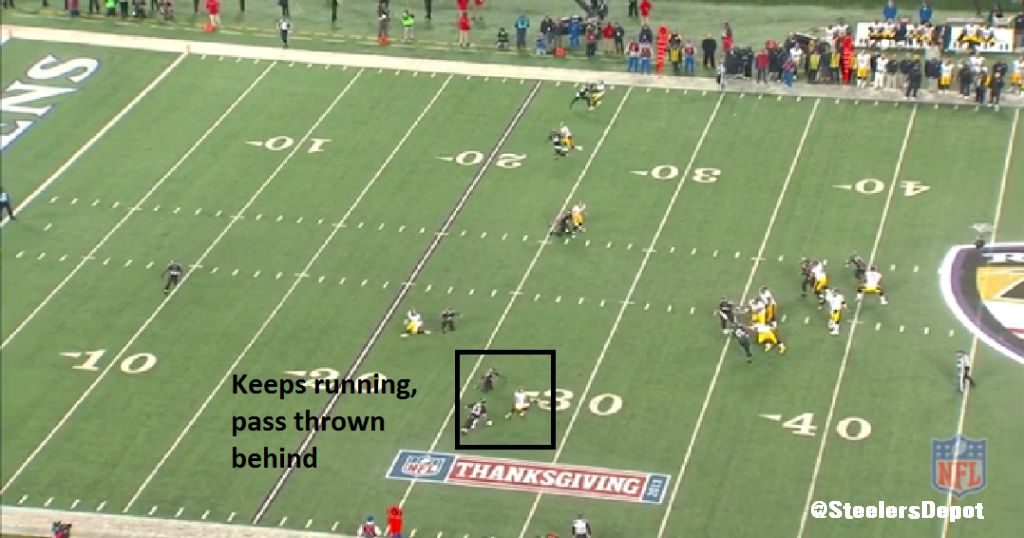 They were plays that appear to be Ben Roethlisberger’s fault but were on Sanders for not being on the correct page with his quarterback.

He will hit the open market in the offseason and it seems unlikely the team will be able to afford to re-sign him.

Jerricho Cotchery: A player that, for seemingly no particular reason, fans wanted gone before the year began, ended up leading all Steelers in touchdowns with 10. By comparison, from 2009 to 2012, Cotchery scored seven times.

With as much 11 personnel as the team had to use this season and Markus Wheaton being slowed by injuries and missed time in the spring, Cotchery’s presence was valuable. Though hard to quantify, he helped lead still an extremely young group of receivers playing with a new position coach.

Statistically, over 78% (36 of 46) of his catches went for first downs. I don’t know how that number stacks up to the rest of the league but it is impressive and the best mark on the team.

The best run blocker the team has and as I noted, was often used as the lone receiver in Heavy sets.

He is set to be a free agent and will be 32 in June. The team has a difficult decision to make based on how they feel about Wheaton’s progress. If they are comfortable with him taking over as the slot receiver, Cotchery may become expendable.

But I’d hate to lose the comfort Jerricho Cotchery brings.

Markus Wheaton: Touted as a speedster from Oregon State, on the surface, it appears Wheaton had a quiet rookie season. But it was a matter of bad luck and circumstance and even then, there was progress.

The rookie missed OTAs due to NCAA graduating rules, preventing Wheaton from joining the team until he graduated school. He missed out on the most critical teaching time of the year. Once training camp begins, there is a lot less hand holding. A major setback that can’t be stated enough.

And of course, he dealt with broken fingers, missing four weeks mid-way through the year with a broken pinky and breaking another finger in Week 16. He was active Week 17 but saw reduced playing time because of the injury and as I noted in my last game notes, was clearly affected by it.

Despite the adversity, Wheaton made progress. He made the starting kick coverage team Week 1, got placed on the punt return coverage Week 10, and became the starting gunner opposite of Antwon Blake in Week 13.

He saw a season high 48 snaps against the Detroit Lions and another 28 in Week 16 against the Green Bay Packers. He saw four snaps almost every week from Week 10 on. That isn’t much but it shows the team had a plan to get him on offense each week. It’s enough for Wheaton to review and build off of during the offseason.

Who knows what kind of wide receiver he will turn out to be but his rookie year was not the disaster some thought it was.

Derek Moye: Steelers’ fans have clamored to see more of Moye. Standing at 6’5, he finished 2013 with two catches, catching a fade for a touchdown in Week 2 against Cincinnati. He also dropped a touchdown against Baltimore. The former Nittany Lion logged playing time in Week 17 and was targeted twice.

Some are enamored with his height but height alone does not make someone a successful wide receiver. I’d rather get the best players on the field in the red zone than a player with one possible route. There are plenty of creative route concepts that can be used to make up for a lack of height in the red area.

That isn’t to say Moye can’t be an asset, but it’s dangerous to fall in love with a receiver just because of his height. I remember the team bringing in guys like Micah Rucker and Matt Trannon, 6’7 and 6’6 respectively, to training camp. Walter Young and Fred Gibson were 6’4. None of them productive. Proceed with caution when evaluating the big guys.

Plaxico Burress: Burress tore his right rotator cuff in training camp and spent the season on injured reserve. He’s set to become a free agent and though he says he wants to play again, the team is unlikely to re-sign a receiver that was already running on fumes. He’ll be 37 before the start of the regular season.

Justin Brown: Brown failed to make the 53 and spent the season on the team’s practice squad. A 6th round pick in last year’s draft, he will again compete for a roster spot. Brown is a big body at 6’3 209.

Next Up: Tight Ends