Ian Rapoport of the NFL Network was at it again on Tuesday and this time he really stuck his Twitter foot in his mouth.

Rapoport tweeted earlier in the day that Pittsburgh Steelers linebackers coach Keith Butler would likely be new Tennessee Titans head coach Ken Whisenhunt‘s strong choice for defensive coordinator if allowed to interview for the position. Rapoport, however, at the end of his tweet noted that Butler has lots of family in Nashville, which apparently isn’t true. 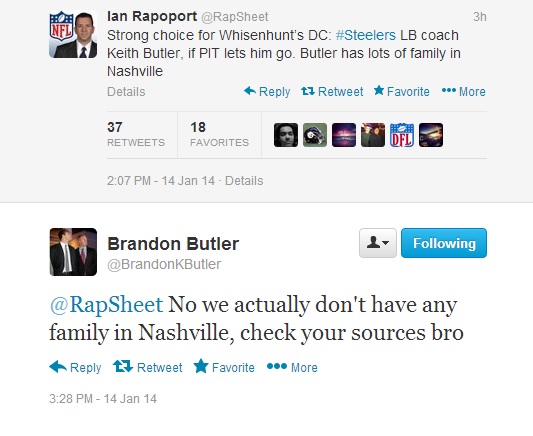 So how do we know that? Well, according to Brandon Butler, Keith Butler’s son, they don’t have family in Nashville and he called Rapoport out on Twitter for making such a statement. He has since deleted the tweet, but we got a screenshot of it.

Rapoport’s act is really growing tiring and he’s starting to make Jason La Canfora look like Jay Glazer. Ok, not really, but you get my point.

Rapoport’s report about Whisenhunt possibly wanting Butler to be his defensive coordinator is not breaking news. He’s a few days and dollars short with that speculation, but he made it worse by trying to connect dots that don’t exist. At least this time he got called on it from someone who is really in the know.

The NFL Network really should be able to do better than Rapoport, who needs to just go back to covering the beat of the New England Patriots. He’s no insider. Glazer, now he’s an insider that you can trust.