– Athlete, quick off the ball

– Uses length and lateral movement to seal the edge

– Above average length and gets his arms extended in both phases

– Reaches the second level with ease, capable of combo blocking

– Versatile in his blocks, was asked to scoop/base/combo/pull at NDSU

– Been part of a winning culture his entire football career

– Slender looking frame and could add some muscle

– Sometimes gets overextended in the run game, falling off blocks and ending up on the ground

– Nasty habit of putting his head down on his punch, getting flatback, and causes his feet to stop moving

– Has only lost 15 games in his entire football career, high school and collegiate (7 seasons)

– Made the playoffs every single season of his football career, winning three championships

– Father Maurice drafted by the Vikings in the 12th round of the 1983 draft, playing in the league until 1987

– Brother of Bryan Kehl, drafted by the Giants in the 4th round in 2008 and current member of the Redskins

The common knock on a guy like Turner is the “lower” level of competition he faced. While he understandably dominated the FCS level more, especially as a run blocker, he still looked fantastic in the game I watched against Kansas St who NDSU defeated 24-21.

He knows how to use his frame to his advantage, sealing the DT and putting him onto the ground on this 3rd and 1. Turner is the left tackle, #77.

You can observe his athleticism as a run blocker below. Watch him explode off the ball, work to the second level, and seal the linebacker to open up the alley.

This block came at a critical point in the game. Down by seven late in the third and the Bison on their goalline, Turner picks off the linebacker lined up over the “A” gap. If he’s slow off the ball, he’s not going to slant down in time. This helps spring the running back for a 75 yard pickup.

And a play of him firing off the ball in pass protection.  Can see the quickness off the ball.

As you may have been able to briefly see in that last animation, there is the issue of his head being down on his punch. Not seeing what he hits and that is going to spell trouble against NFL defensive ends that can knock your hands away and get around the edge. A different time in the game with stills to show what I’m talking about a bit better. 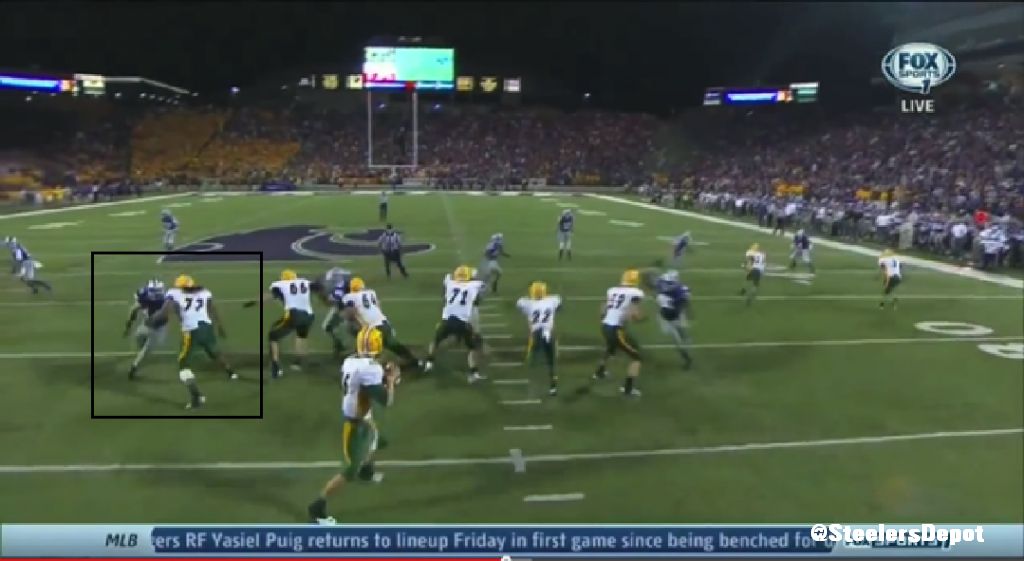 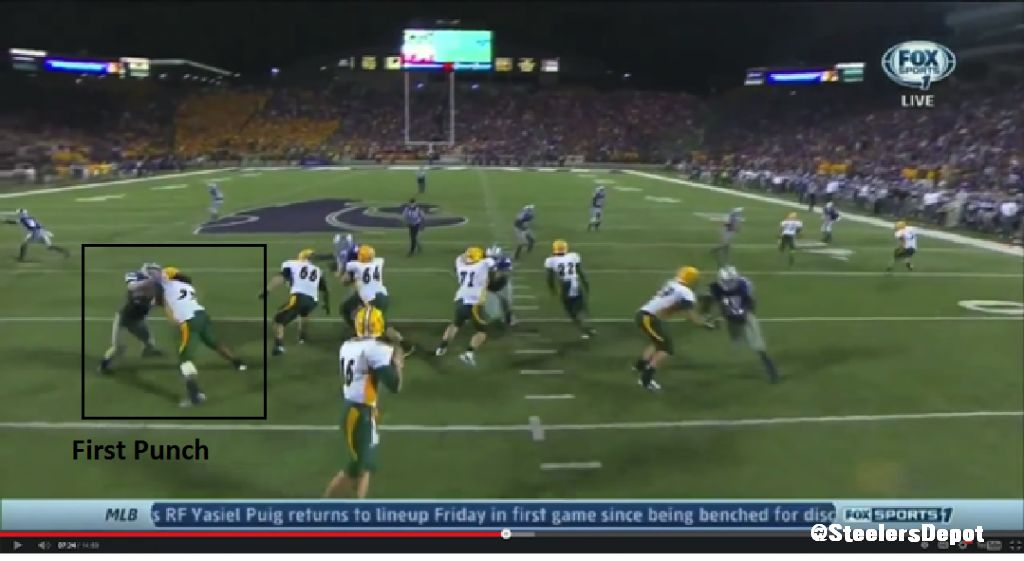 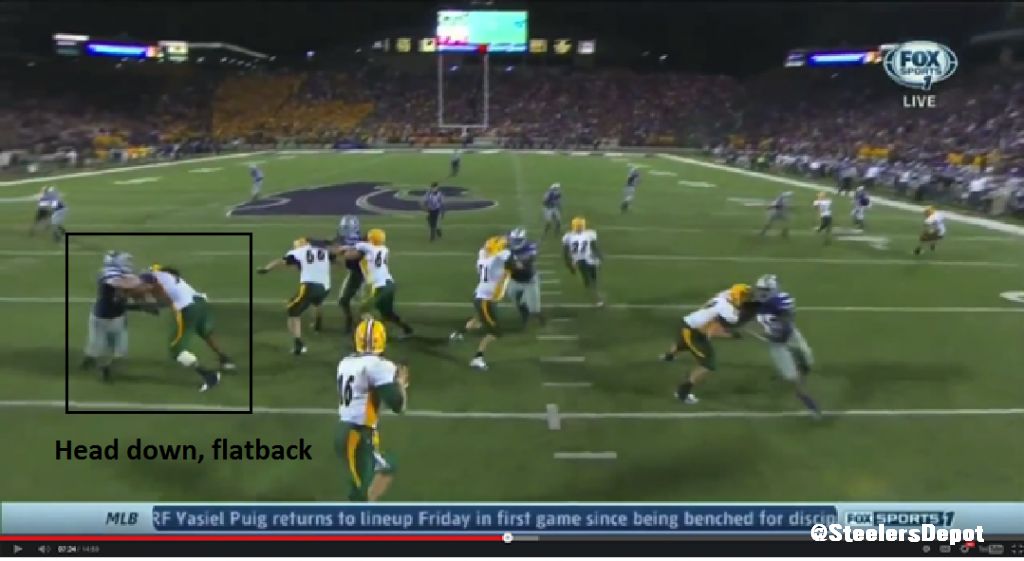 The more I read his bio, the harder it is not to fall for this kid. Usually only quarterbacks get talked about as being “winners” but you can’t ignore a track record like the one Turner owns. Eight losses in three years of high school, 26-8 overall. State playoffs in all of them. 9-5 in 2010 at North Dakota, advancing to the third round of the playoffs before losing in OT. 14-1 in 2011, including a win over Minnesota, cultimating in a FCS Championship. The same record the following year with a championship and defeat of Colorado State. And then we was a part of a Bison team that ran the table to win their third straight January 4th.  All Turner knows is winning.

He has very few flaws in his game and the ones that exist are correctable. Of the reports I’ve written so far, he has the shortest list of negatives. If he played the way he did at North Dakota as he did at say, Texas A&M, he’d be the top tackle in the draft.

As I’ve written, I’m content with the Steelers’ tackles. But if Turner is sitting there in the middle of the third, which as teams get to know more and more about him seems unlikely, the value would be difficult to pass up.