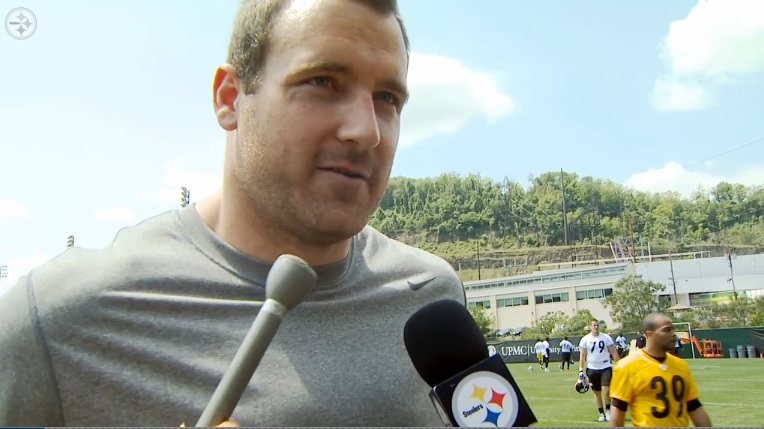 Pittsburgh Steelers tight end Heath Miller is now nearly one full year from the serious knee injury suffered late last season and is currently on pace to catch 62 passes for 667 yards, despite missing the first two games while finishing up his rehab. With 2014 currently scheduled to be the final year of Miller’s current contract, and the team needing salary cap space, a decision will need to be made almost immediately following this season as to whether or not to extend him.

Miller is currently scheduled to count $9,466,500 against the Steelers 2014 salary cap and $6.02 million of that is his base salary. That would be the amount of cap space saved if he were to be cut outright, which we all likely agree won’t happen. Sure, the Steelers could simply let Miller play out his final year and decide whether or not to franchise him in following the 2014 season, but I do not believe that will be the course of action taken with him.

Remember, Miller is scheduled to make that $6.02 million in 2014, so that needs to be factored into any extension given him when you talk about new money over old money. So what would an extension look like for Miller that would be good for both sides?

Keep in mind that one of the goals here is to clear cap space for 2014 in addition to locking Miller up, so in my opinion, a three-year extension with a four-year total value of $30 million should do the trick. That deal would include an $8 million signing bonus and a first year base salary of $1 million. The second year of the deal will also likely need to be guaranteed as part of the extension, as I do not believe $9 million guaranteed will be nearly enough to get the deal done when you talk old money versus new money. That would mean giving Miller a guaranteed 2015 base salary of $5 million, which would then up his two year take to $15 million guaranteed.

The back end of that deal really doesn’t matter, but in my example it would include non guaranteed base salaries of $7 million and $8 million in 2016 and $2017 and $500,000 roster bonuses in each of those two years. That totals the deal out at $30 million.

So what would the cap hit look like in each of those years? For starters, Miller’s 2014 cap charge would be roughly $6.4 million and that would clear the Steelers roughly $3 million in much needed cap space. In 2015, Miller’s cap number would be an affordable $7 million with the final two years of the deal coming in at $9.5 and $10.5 million respectively.

The contract extension that I outlined above would give Miller an average yearly value of $7.5 million and that would rank him second behind New England Patriots tight end Rob Gradkowski as things stand right now.

While not the run blocker he once was, Miller is still one of the better all-around tight ends in the league at 31 years of age. There is no reason to think that he can’t keep up his current level of play for at least two more season and should he make it three more season, even better.