A breakdown of the five sacks the Pittsburgh Steelers allowed against the New England Patriots.

1. 3rd and 2, 12:12 1st. Shotgun, empty set. Five blocking vs a four man rush. The play was designed for the ball to come out quick, hitting Felix Jones on an “in” route (why Jones was the primary receiver something I don’t entirely understand, guess trying to take advantage of matchup vs Dont’a Hightower). It’s obvious to know that because both tackles are asked to cut the linebackers. 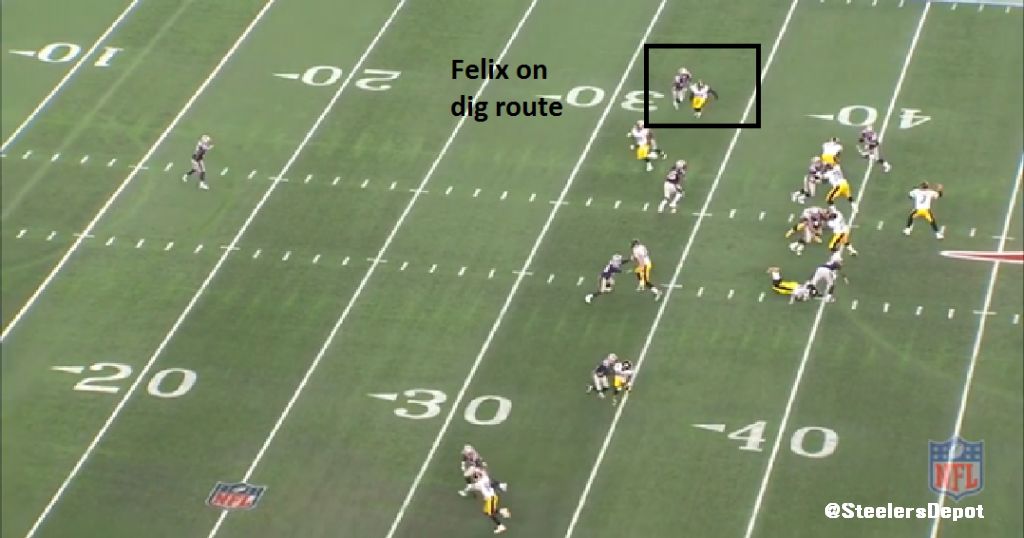 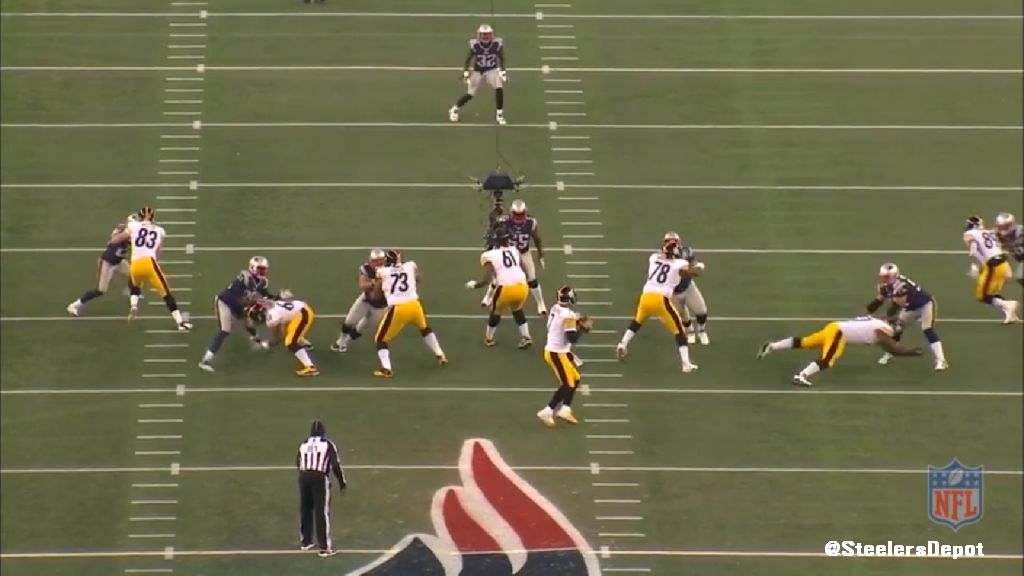 The window to hit Jones on the in cut is tight with Brandon Spikes following Ben Roethlisberger’s eyes and driving on the route but the window exists. 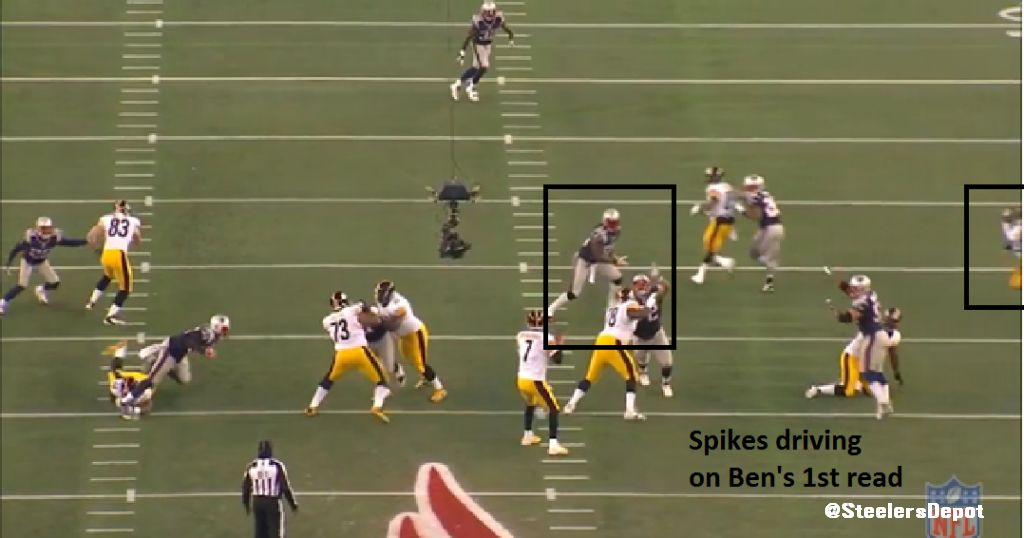 Ben comes off that read and looks for anything else but no other receiver gets separation. Because of the cut block, the pressure gets to Ben a moment later and he fumbles with New England recovering.

Two issues on the play. Blame doesn’t lie on the tackles because the ball has to come out quick. Ben really didn’t have the luxury to go through his progressions. It’s a “one, two, ball out” read. And even though the first read is a difficult throw, it was best to take it.

The other half is the lack of separation from any other receiver. Four other guys can’t get a step on a defensive back, a recurring theme the last two games.

Blame: Half on Ben, half on the receivers

2. 1st and 25, 1:03 1st. Shotgun, empty. Five block vs four rush. Try to run slant/flat at the top of the screen with bubble screen at the bottom. Guessing Ben has a choice of what side he wants to look at first then can across the field if the first isn’t there. 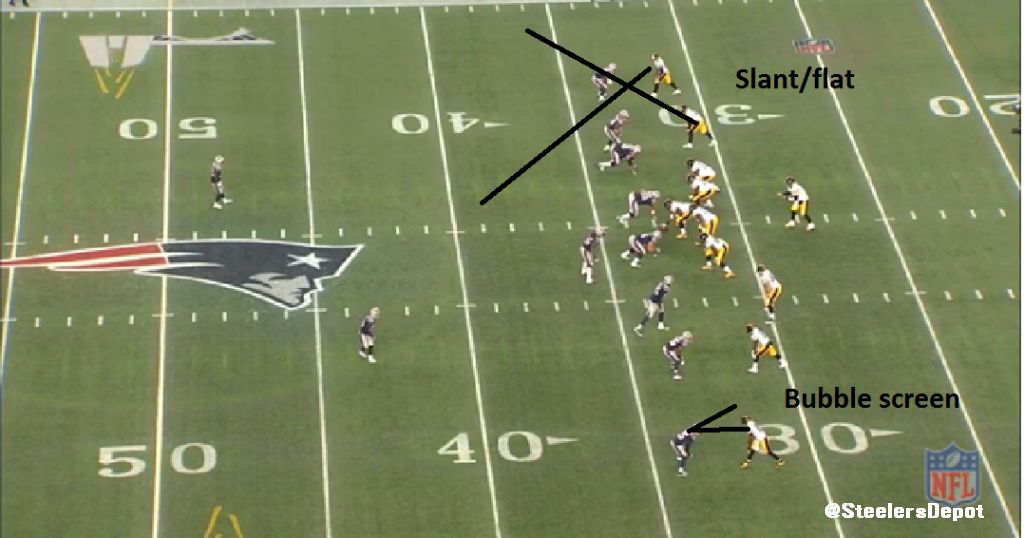 Ben looks at the slant/flat first but it doesn’t develop after Antonio Brown trips. 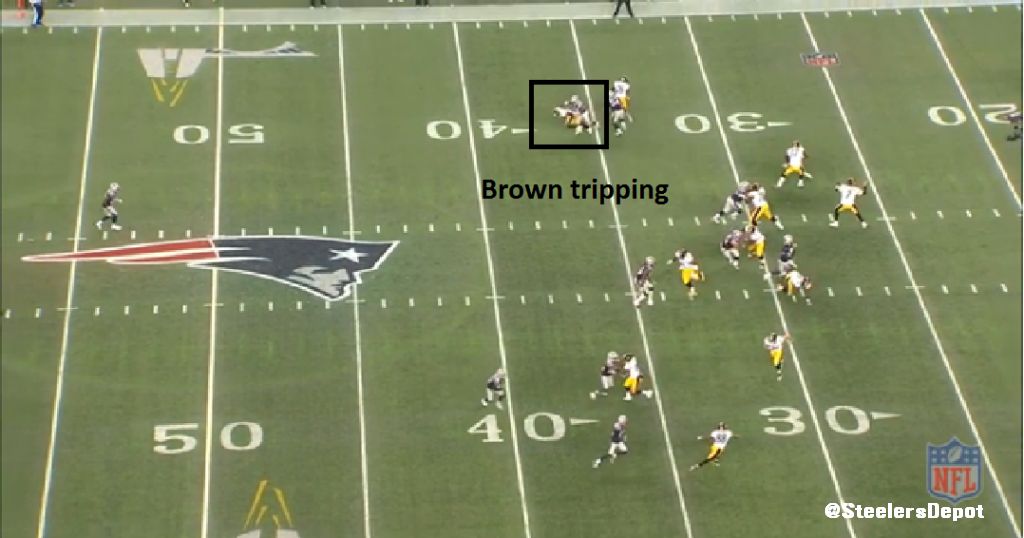 Kelvin Beachum tries to cut block Chandler Jones but he gives an inside moves and Beachum doesn’t get much of the end. Ben doesn’t have time to look to the screen. Jones gets to Ben in 2.56 seconds.

It’s a tough block for the left tackle, cutting a player moving laterally at that moment, but part of the blame falls on him. The other on Antonio Brown for tripping. Bad luck but if he doesn’t, Ben likely pulls the trigger and the sack doesn’t happen.

Blame: Half on Beachum, half on the wide receivers. 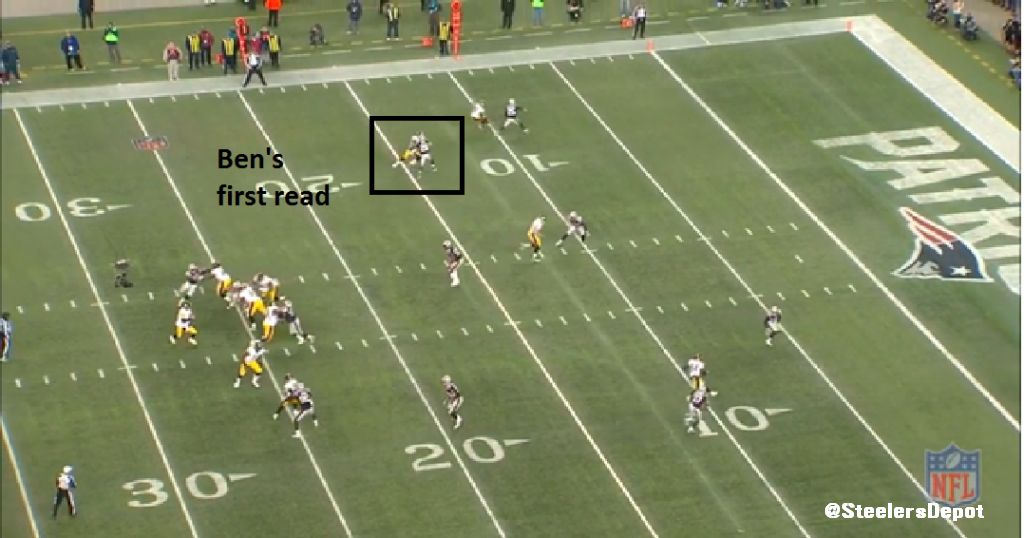 Ben looks across the field (good!) and has Antonio Brown open on the dig. 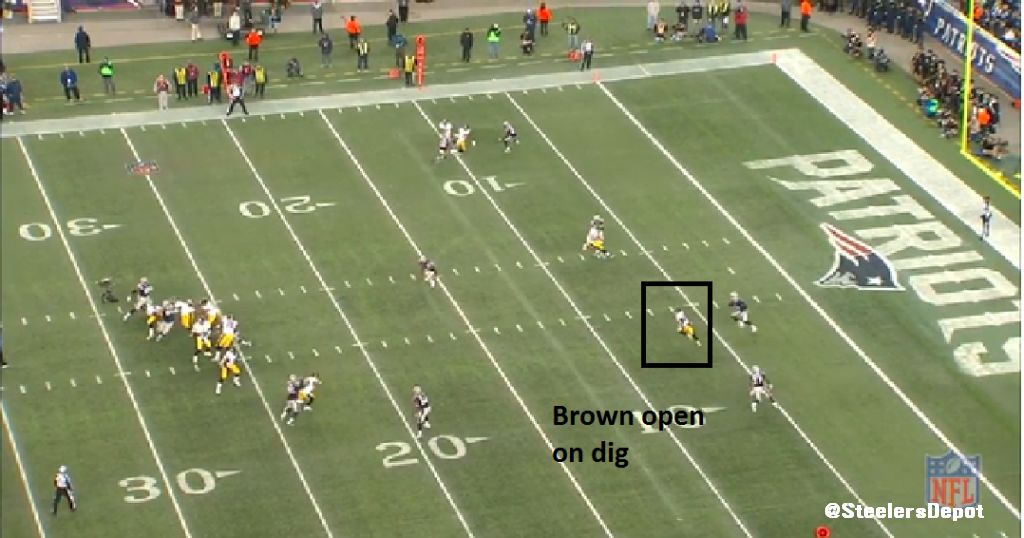 But he pumps and doesn’t make the throw (bad!)

Brown hasn’t settled down either. It isn’t as if the safety can jump in front. With Brown running across, he can still box out the defensive back. Ben has to rip it. He tries to climb the pocket instead and Chandler Jones, on contain, brings him down. This one clearly on Ben. 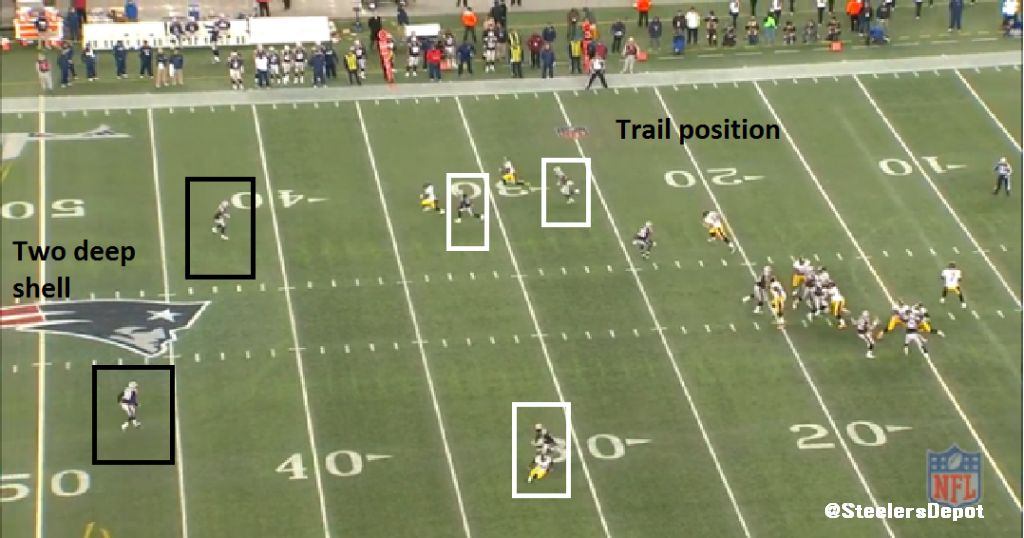 Steelers pick up stunt well between the strong side end and under tackle.

But Felix Jones misses his assignment, doubling Kelvin Beachum’s assignment. Linebacker on a “hug” blitz (rush if RB blocks) and he runs through free. 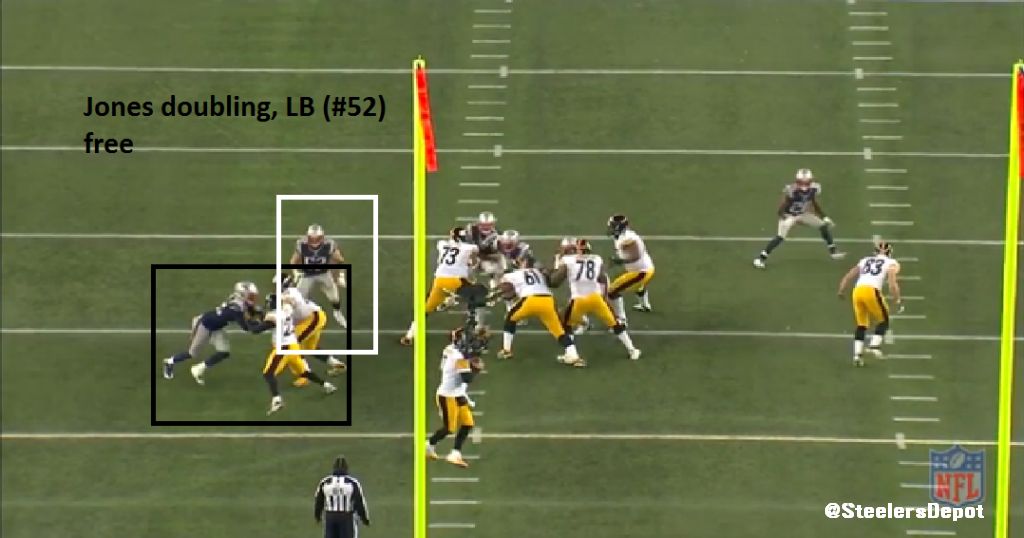 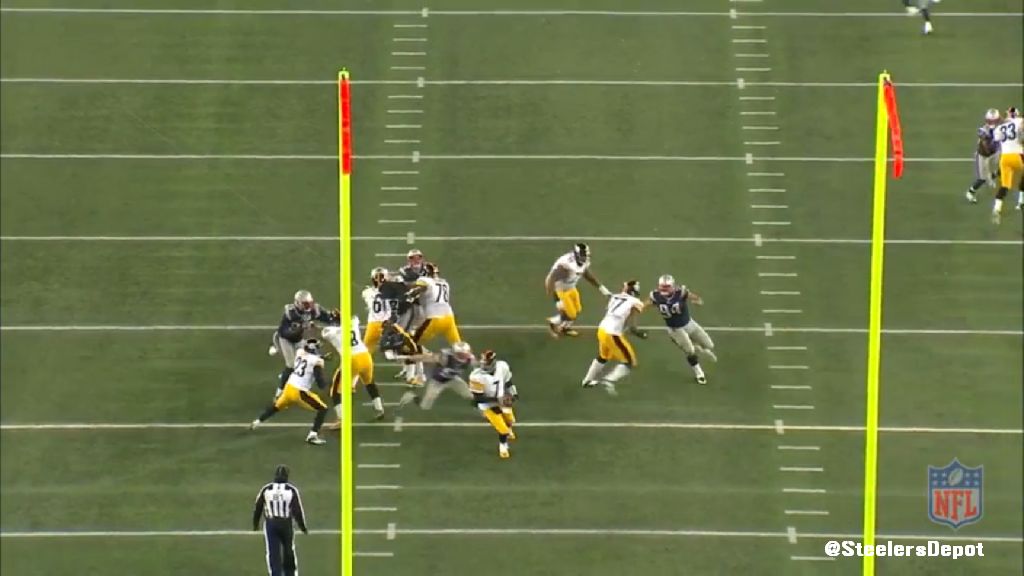 5. 1st and 10, 5:15 4th. Shotgun, 11. Five block (TE on block/release) vs four man rush. Another two deep shell with trail technique from underneath defenders. 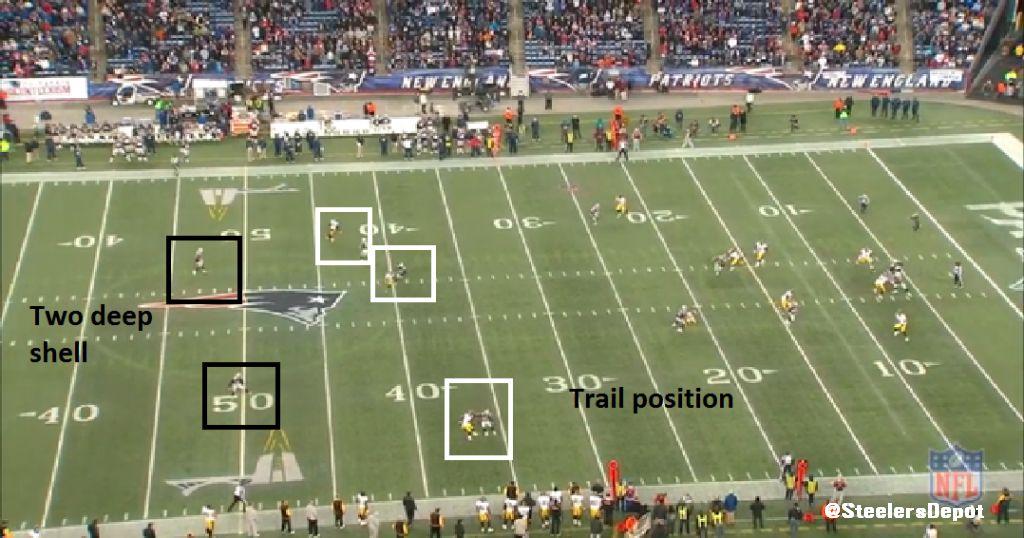 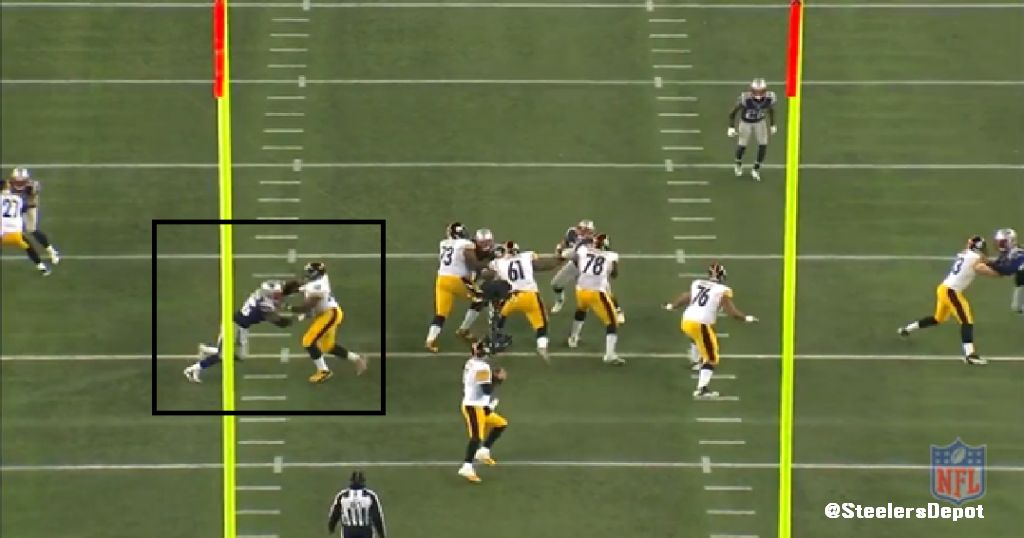 And then Carter sheds Beachum to bring Ben down from behind. 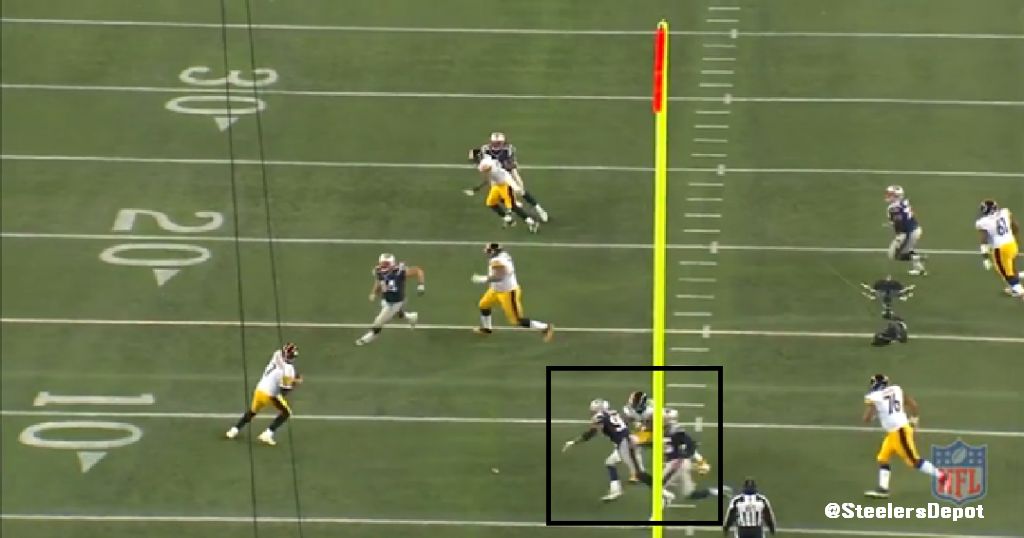 Before we get to the counter, want to point out four of the five sacks allowed came with the Patriots just rushing four. Extremely disappointing stat.