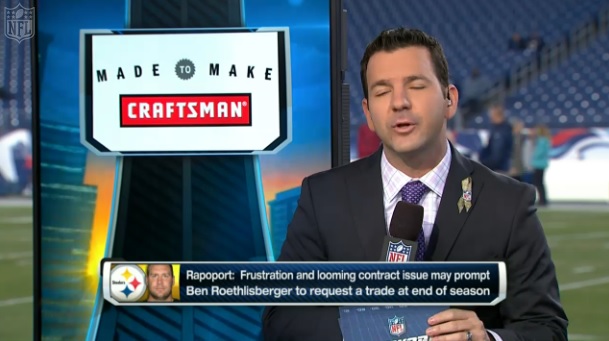 During halftime of the Thursday night game between the Indianapolis Colts and the Tennessee Titans, NFL Network analyst Ian Rapoport, Michael Silver and LaDainian Tomlinson devoted a whole segment to news about the Pittsburgh Steelers. They not only talked about the future of quarterback Ben Roethlisberger, but also head coach Mike Tomlin, the offensive coaching staff and safeties Troy Polamalu and Ryan Clark. Below is what each had to say along with my rebuttal.

Ian Rapoport: Steelers sources would not be surprised if Ben does ask them to explore trade options after the season. One, he is incredibly frustrated with the direction of the team, with the offensive coaches and I’m told there could be significant turnover there.

Me: Roethlisberger has denied vehemently that he wants to be traded and has said that he wants to finish his career in Pittsburgh. In addition to that, Roethlisberger would be a $13.59 million dead money charge if traded and that would only save the team $5.305 million in 2014 cap space by doing that. They could probably save near that amount of cap space in 2014 by signing him to an extension. Oh, they also would then have to hope they could draft his replacement early in the draft. Just for a point of reference, Chance Warmack was drafted tenth overall by the Tennessee Titans this past year and his first year cap hit was $2.212 million. You always have to remember that replacement cost, folks. Like I have said previously, I will be floored if Roethlisberger is traded.

As for Roethlisberger being frustrated with the direction of the team and the offensive coaches, I am sure there is some degree of frustration. The whole Roethlisberger versus Todd Haley thing has been talked about since day one. If the Steelers season ends with a sub .500 record and no playoffs, I don’t doubt for one second that there will be a change or two or three with choir boy Haley possibly being the first one out the door. Would that really be a shocker? No.

Ian Rapoport: There could be big changes coming to Pittsburgh, but I am told not to head coach Mike Tomlin. He is safe for 2014 season.

Me: Thanks for that breaking news, Skippy. The Steelers have had just three coaches in 44 years. Bill Cowher went 7-9 and 6-10 in back to back seasons with only one AFC Championship to his credit at the time and the Steelers stuck with him. In other news, water is wet, but we will make sure to give you credit when the obvious happens.

Ian Rapoport: The same cannot be said for some veterans, guys like Troy Polamalu, Ryan Clark. I am told they have to play incredibly well these next seven games to have a chance to come back next season.

Me: Stop the presses. You mean there’s a chance that Clark, who by the way is 34 years old and not under contract next season, might not be back in 2014? Is this news? Look, Clark might want to start his analyst career and if not, I have a feeling the Steelers won’t be opposed to letting him return on a one-year qualifying contract with no guarantees he starts. Does Rapoport even know what a qualifying contract is? The days of Clark earning $3.5 million are over and that’s not news.

As for Polamalu, it’s no secret that he will be the gorilla in the room during the offseason. I have written about that for a while. Sure, he’s unlikely to return at the $7.5 million salary he’s scheduled to make, but I have a funny feeling that he’ll be back at a discounted rate. The same goes for Ike Taylor, who will also be entering the final year of his contract.

Michael Silver: It’s no secret that Ben Roethlisberger is not super popular in the Steeler locker room, but he’s so good that people recognize his talent. When I talk to players and other people in the organization, I’m told that he’s more engaged there, doing a better job of preparation when he’s at the facility, but away from the facility, he’s no Peyton Manning. In fact, that is what I’m told is the biggest obstacle to him staying in Pittsburgh over the long haul from their perspective. At this stage of his career, he needs to become a more cerebral player and not just a physical wonder.

Me: So let me get this straight, Roethlisberger is so good that people recognize his talents, but at the same time he’s just a physical wonder? That makes as much sense as some of my writing.

You mean Roethlisberger isn’t super popular in the locker room? Was there a time when he was and I missed it? Anyone?

So, Roethlisberger is not as cerebral as Peyton Manning? Again, stop the presses. There is not another quarterback in the league that is as cerebral as Manning is. Is there one in the draft this year? So, because of him not being cerebral enough, he might be traded? How many Super Bowls has Manning been to and how many has he won? Maybe Manning is not enough of a physical wonder. Ever thought about that? Well, at least Roethlisberger is doing a better job of preparation.

LaDainian Tomlinson: I think the frustration for Ben, actually comes from the change in philosophy on offense. I have been there. My last couple of years in San Diego there was a change in philosophy and you lose the passion to play the game. When I watch Ben on film, that’s what I’m seeing – is the disconnect from him and offensive coordinator Todd Haley. So to me, that’s the very reason why Ben is asking for a trade, or will ask for a trade at the end of the season.

Me: Are you fucking kidding me? Tomlinson is the poster child for losing passion. Would someone like to point out to me where Roethlisberger is showing a disconnect from Haley on film? Weren’t we supposed to see several sideline yelling matches by now? Antonio Brown “allegedly” has shown more disconnect with Haley than Roethlisberger has. Does Roethlisberger love Haley’s offense? Probably not, but he is not even close to being as disconnected as Tomlinson was with the Chargers. There’s not a player currently in the league that was that disconnected. Also, Roethlisberger plays hurt and refuses to be pulled from games that are out of reach. I’m sure that doesn’t count as passion in Tomlinson’s book.

Talk amongst yourselves in the comments below.