The tackle box, as defined by the NFL, runs tackle to tackle and up to three yards down the field past the line of scrimmage. Using that definition, Baltimore Ravens cornerback Jimmy Smith should have been flagged for his helmet-to-helmet hit on Pittsburgh Steelers running back Le’Veon Bell late in the Thursday night game.

Bell, as you can clearly see by the screenshots below, is clearly outside of the left tackle and in fact, he’s almost to numbers when Smith uses the crown of his helmet to deliver a hit to the side of Bell’s helmet. In addition to Smith, it also looks as though Ravens linebacker Courtney Upshaw also hits Bell with the crown of his helmet.

Here is what the NFL rulebook says about the new rule.

Article 8: Initiating Contact with the Crown of the Helmet. It is a foul if a runner or tackler initiates forcible contact by delivering a blow with the top/crown of his helmet against an opponent when both players are clearly outside the tackle box (an area extending from tackle to tackle and from three yards beyond the line of scrimmage to the offensive team’s end line). Incidental contact by the helmet of a runner or tackler against an opponent shall not be a foul.

Penalty: Loss of 15 yards. If the foul is by the defense, it is also an automatic first down. The player may be disqualified if the action is flagrant.

The play happened on second down, so a penalty would have put the ball at about three inches away from the goal-line. However, it would of given the Steelers a new set of downs to work with. It’s hard to speculate how things would have transpired from that point on, but it is possible that the touchdown play to wide receiver Jerricho Cotchery could have been used as the two-point play had the Steelers had a couple of cracks at running the ball in with Jonathan Dwyer, who replaced the concussed Bell.

At the very least, Smith should be fined for his hit and quite possibly Upshaw as well. If they’re not, I hope Dean Blandino, the NFL’s vice president of officiating, has a good explanation as to why they weren’t. It just goes to show how confusing this new rule is and why the officials are apparently afraid to penalize for it.

Here is a video put out by Blandino earlier in the season that describes the rule. 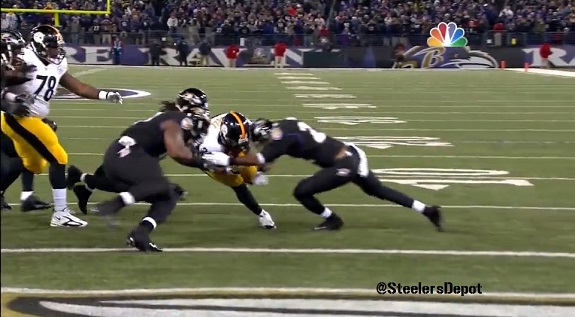 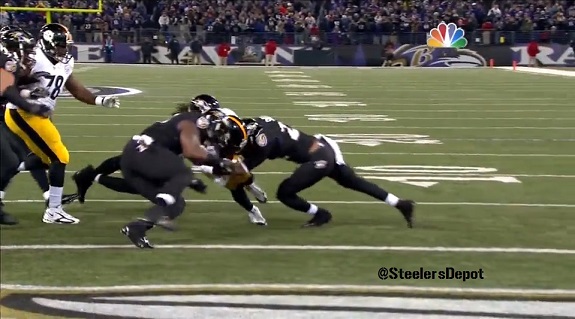