Sack breakdown of all five sacks allowed by the Pittsburgh Steelers versus the Minnesota Vikings.

1. 2nd and 10, 11:47 2nd. 12 personnel. Five blocking vs a four man rush. Simple breakdown here. Bad first punch from Mike Adams working against Jared Allen. Not strong enough and Allen, who isn’t square and doesn’t let the left tackle to get into his chest, blows through.

Adams follows that up by doubling over and bringing his head down. Bad case of flatback.

The Viking end drags Ben Roethlisberger down from behind for his first career sack of Big Ben.

2. 2nd and 6, 8:41 2nd. 11. Vikings rush four with the Steelers keeping five plus Le’Veon Bell chipping and releasing. Half-hearted playaction from the Steelers. Cover 2 shell from the Vikes. Ben’s first read is backside to Antonio Brown and there is a window if Ben throws to Brown’s outside shoulder. 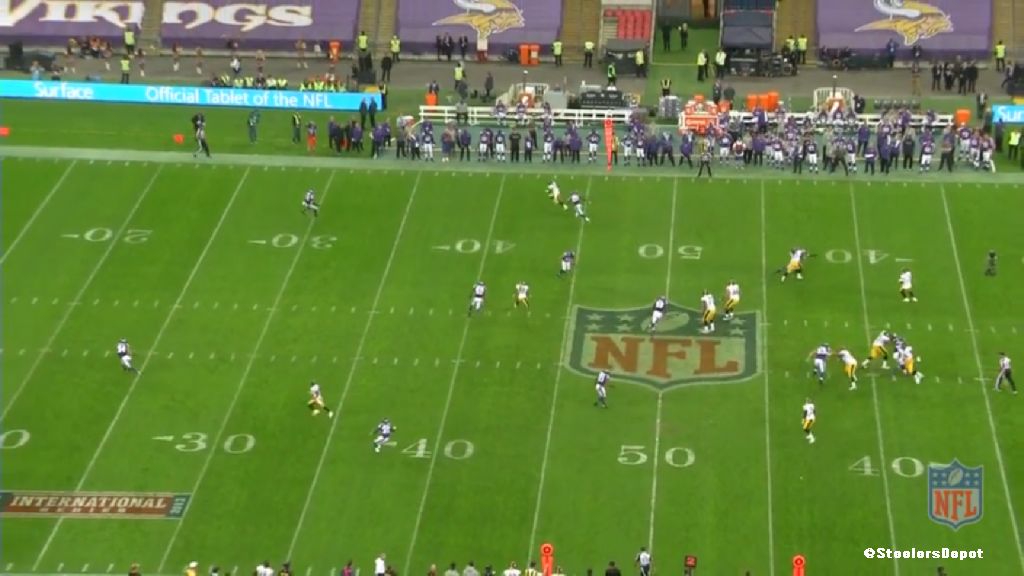 Not the easiest throw from the far hash but a makeable one, especially with the FS having his hips turned the opposite side. Makes it harder on any throw having to flip and take a proper angle to the ball in one fluid motion.

But Ben decides against it and looks to his second read. Emmanuel Sanders settles down and shows his numbers. 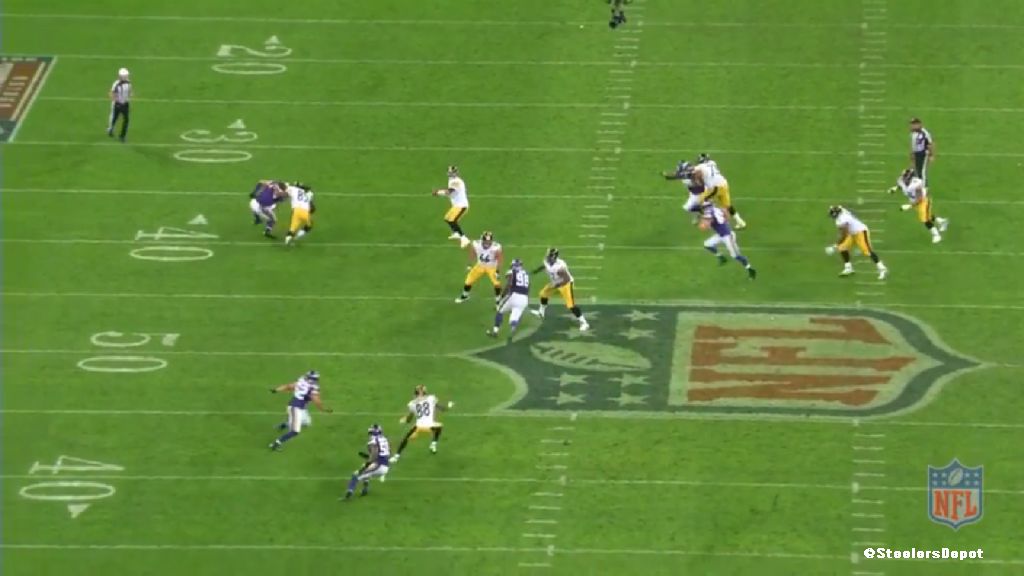 Two defenders in the area but there is a window to Sanders’ right side. Ben again decides against it. By this point, he takes his eyes off the field, sees the impending rush and essentially gives himself up on the play, taking the sack.

Blame Ben for this one. Two open receivers and doesn’t pull the trigger on either. Sure, neither were wide open but good luck finding much of that in the NFL. Can’t take your eyes off what’s happening down the field either.

3. 3rd and 3, 4:10 2nd. Shotgun, 11. Four man rush vs five blocking. Tackle/end stunt on each side. On the left, Adams whiffs vs Allen as he loops inside. On the right, Marcus Gilbert doesn’t pass off the end to pick up the tackle.

Adams somehow ends up in another world and barely stays on screen on the replay during the broadcast.

Gilbert doesn’t see Kevin Williams until the very end of the play and probably only because the end was slanting to hard Gilbert physically couldn’t follow any longer. 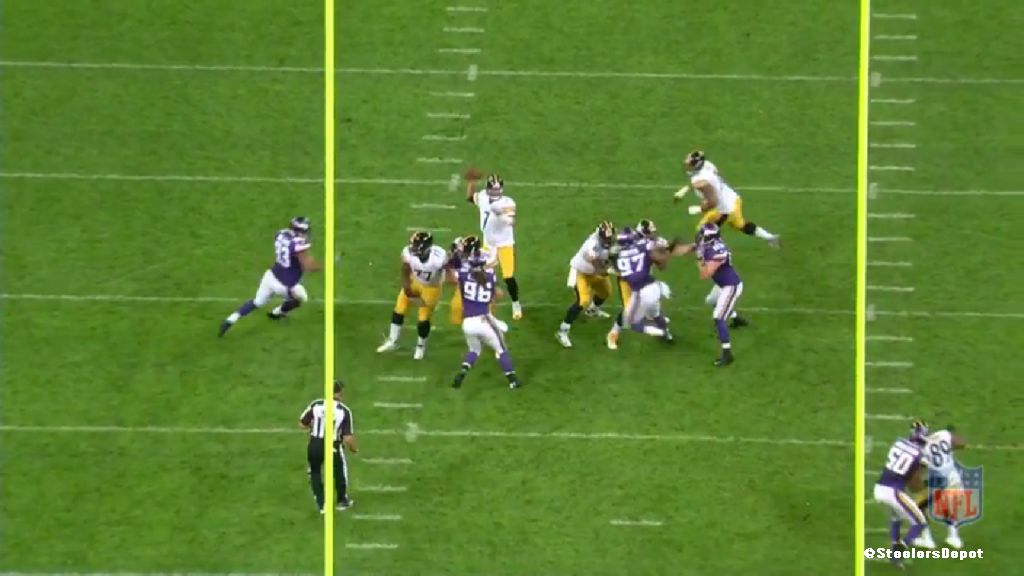 Jared Allen is literally never blocked and brings Ben down. All because of one simple T/E stunt.

Lot going wrong on this play but going to put the blame on the left side of the line for missing the stunt. Half of the blame on each. Gilbert looked bad but Williams did not get on the sack so no blame for the right tackle.

4. 3rd and 6, 3:42 3rd. Shotgun, 11. Rush six with six blocking. Mesh route (Haley’s “gotta have it” play on third down). Antonio Brown is open on it but pressure comes before Ben able to get it away. Little more complicated blitz here from Minnesota.

At its core, still the same concept of a tackle/end stunt. But the three tech slants to the closed side and the Vikings run LB Chad Greenway through the “B” gap. He essentially “picks” Adams and Allen loops inside.

One of two things will happen with the successful pick.

– Bell doesn’t pass off, stays on the LB, and Allen comes in scot-free.

– Allen will be solo on Bell. A big mismatch in favor of the defense.

The latter occurs and Bell is a fly on the windshield to Allen. Adams never sees the pick and Greenway is able to get under Adams, push him away, and get additional pressure. Allen brings Ben down.

Another tough decision because the concept is really good. So have to give some credit to Minnesota. But seeing Adams get jolted back by Chad Greenway is borderline sickening. So half of the blame on him on yet another failed stunt. Not going to blame Bell for not picking up Allen. Unrealistic to expect that.

5. 3rd and 6, :19 4th. Shotgun, 11. Five rushing (LB on “hug blitz”, blitzes if RB stays to block) versus six blocking. Think Ben wanted to hit the No. 2 receiver on a dig but the LB sitting down in the middle of the field takes that away.

On the line, Kelvin Beachum short-arms Everson Griffen and doesn’t move laterally with him either. Griffen uses a rip to get under him and get to Ben first with Chad Greenway cleaning it up and forcing the fumble.

Just one. A Mike Adams hold.

So on the season…