Unless it is a misprint on the official NFL transactions release, both the Pittsburgh Steelers and the Arizona Cardinals each received draft picks from one another as part of the Wednesday trade for tackle Levi Brown.

The official release calls the selections, unannounced, as these are conditional. What the conditions are, however, are still unknown at this time. They could be tied to snaps or games started by Brown, but that is mere speculation on my part.

If indeed this is not an error, then the deal continues to look even better for the Steelers as the Cardinals also paid a huge chunk of Brown’s 2013 salary as previously reported.

We will have to see if the Steelers comment or clarify this next week. 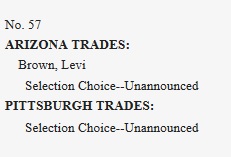