The long touchdown pass from Pittsburgh Steelers quarterback Ben Roethlisberger to wide receiver Emmanuel Sanders on the first offensive possession of the second half was not only executed perfectly, it was set up perfectly as well.

The Steelers took possession of the football at their own 36 yard-line up three points and ran running back Le’Veon Bell off right guard on first down for seven yards out of a 21 personnel grouping. It was Bell’s longest run of the game up until that point.

On second down, using 12 personnel, Bell squeezed out another two yards off right tackle to set up a third and one from the Steelers own 45 yard-line.

Due to all of the short, quick passes and runs by the offense in the first half, the Jets played man coverage across against a Steelers bunch formation to the right using 21 personnel once again. They were betting on either another run by Bell or a quick out or slant to one of the eligibles and thus had no safety help over the top as all 11 Jets defenders where within six yards of the line of scrimmage.

Roethlisberger is one of the best quarterbacks in the league off of play-action and both he and Bell sold it well at the snap. That, combined with the down and distance, resulted in no pass rush and it damn near froze everyone on the Jets defense.

Sanders released at an angle to the outside at the snap as if he is running a slant or curl route and Jets cornerback Antonio Cromartie takes the bait. When Sanders sees Cromartie open up his hips to the sideline, he head fakes to the outside and sticks his left foot into the ground in order to cut back inside. Cromartie tries to grab for him as he blows by, but fails in doing so and Sanders has five yards of separation in no time and is wide open for the easy touchdown. 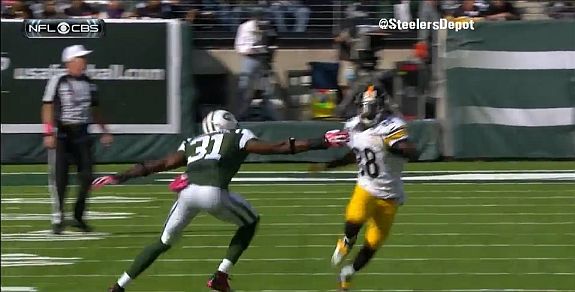