Breakdown of all defensive snaps from Pittsburgh Steelers mose tackle Steve McLendon against the Baltimore Ravens.

1. 1st and 10, 12:25 1st. Lined up as the one technique (shaded on either side of the center). Bull rush, walking Gino Gradkowski into the pocket. Joe Flacco on three step drop so ball comes out quick and McClendon not able to get pressure.

1. 3rd and 1, :50 1st. One tech, shaded playside. Wrote about this play in my breakdown. Gradkowski can’t reach block on the zone scheme and McClendon gets penetration, helping on the tackle and blowing the 3rd down up. He’s tough to defend on stretch plays. 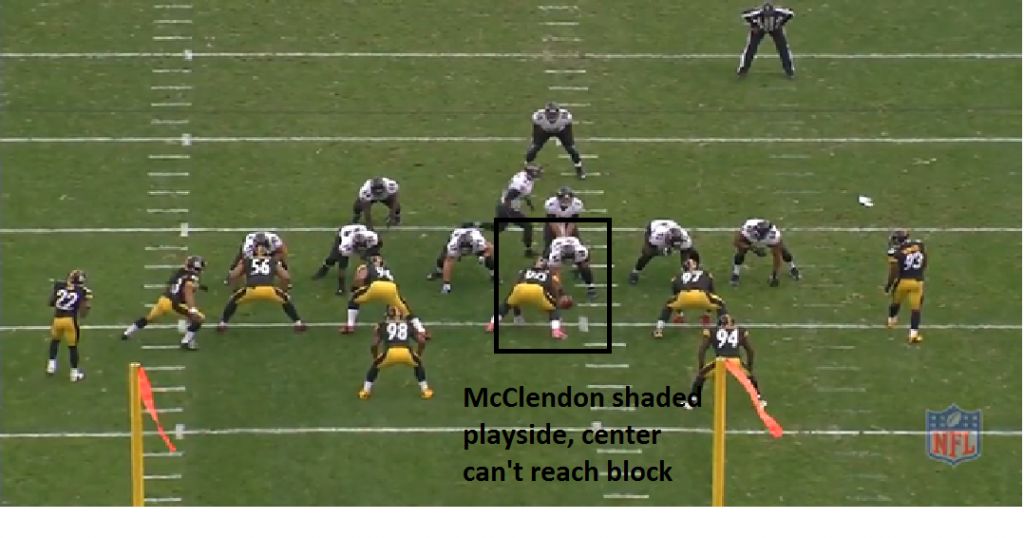 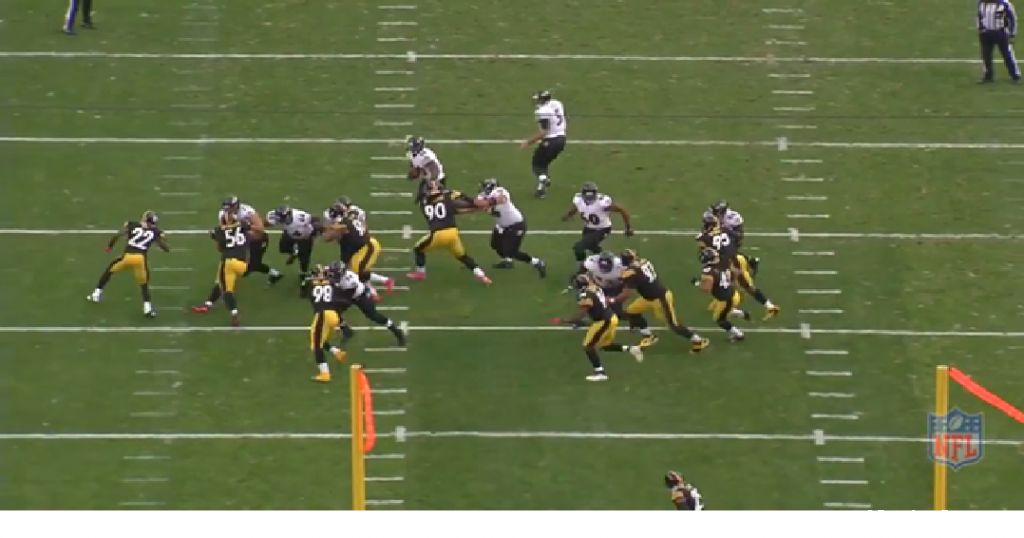 1. 1st and 10, 6:57 2nd. Team was in dime for all three of these plays with McClendon one of two lineman. Lined up as the weak one tech. Base blocked by Kelechi Osemele and frontside lineman Gino Gradkowski ends up doubling him on a zone block (not a coincidence after what McClendon did previous play, I’m sure). Ray Rice does gain 13 on the play. 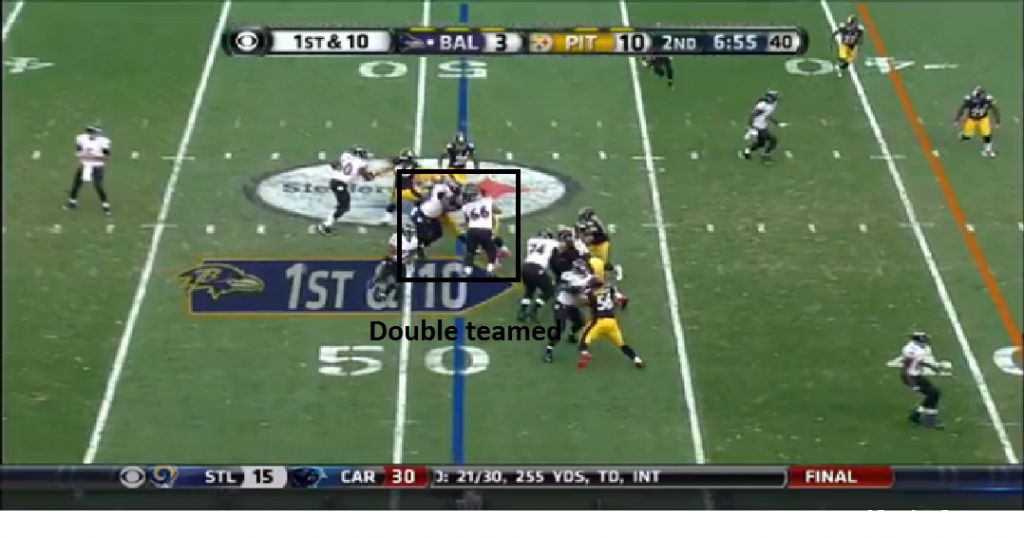 2. 1st and 10, 6:23. Playside one tech. Bullrushes Gradkowski, shows good arm extension and strength, keeps his legs moving, and walks him back.

3. 2nd and 10, 6:19. Almost head up on the playside guard (not using Coaches Film so little tough to judge it). Solo block by Osemele who executes a good reach block, seals McClendon to the outside, and keeps his legs moving to push the defensive lineman out of the play. 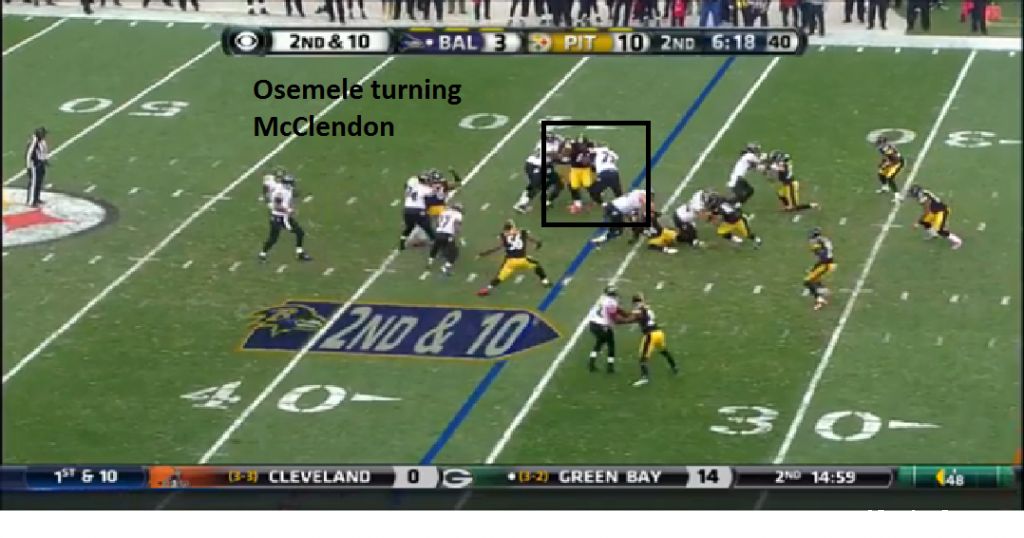 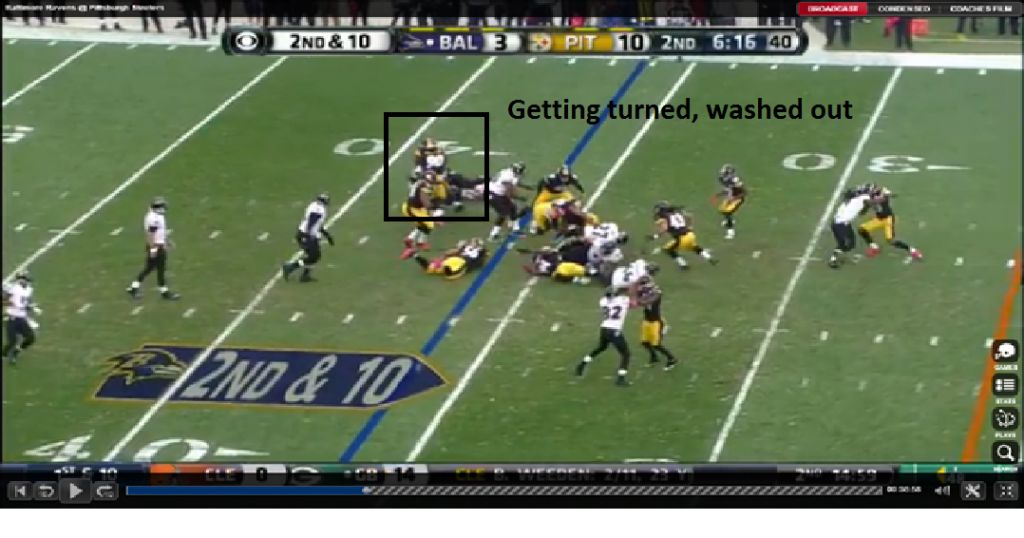 1. 1st and 10, 2:56 3rd. One tech, even front by Baltimore. Backside guard on this run (Marshal Yanda) does a nice job of getting to him on the reach block. But that’s why he’s one of the better guards in the league.

2. 2nd and 10, 2:22. Weak 1. Initially rushes free with the Ravens occupied by a blitzing Vince Williams but they adjust, pass off correctly, and the guard picks up McClendon.

4. 4th and 1, 14:28. As pointed out in the breakdown, McClendon turned on Flacco QB sneak. Tough play but needs to stay square, take up as much space as possible. 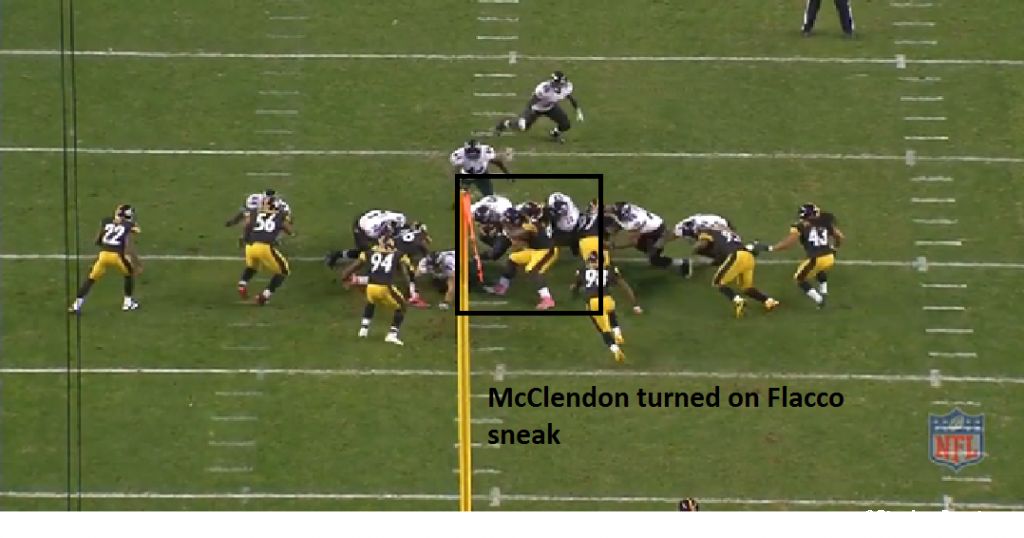 2. 2nd and 4, 9:30. Weak one. Bull rush but double-teamed with the Steelers only bringing four so he doesn’t get pressure.

4. 2nd and 6, 6:37. Playside one. Bull rush, slowly walking Gradkowski into the pocket (less prominently so than the other two). Puts arm up when Flacco goes to throw but doesn’t bat it down.

7. 2nd and GL, 2:34. In goalline package. Fights through the backside guard’s cut block, forces Rice to cut and makes the tackle.

With the team playing so much subpackage football (51/65 plays) it was tough for McClendon to log snaps. Only on three plays did he play in subpackage, all coming in the third drive. But I have him for seven clearly positive plays so not a bad percentage. Still some negative plays and technique work (staying square to the ball still an issue) and it’s obvious he does a lot better working against angles than he does against power schemes, but overall, it’s hard to complain about his play the first half of the year.