Pittsburgh Steelers second-year offensive lineman Kelvin Beachum made his first career start Sunday against the New York Jets and despite him being flagged three times and almost allowing an early sack/safety. I really thought he represented himself well. Below is a breakdown of his play.

Beachum’s game actually got off to a good start on the failed screen pass to the right that doinked off of the helmet of tight end Heath Miller. While it might not seem like much, Beachum perfectly executed a backside cut block on Jets defensive end Quinton Coples.

On the Steelers second possession is when Beachum allowed his first of two hurries of the game and it almost ended in a sack/safety of quarterback Ben Roethlisberger. Beachum appears to take a false step with his left foot at the snap and winds up opening up the gate to his right as defensive end Muhammad Wilkerson works back inside. Beachum also has a soft set and has no punch. Watch his arms go out then up and they are outside the frame of Wilkerson. He gets a right hand to the throat of Wilkerson but it’s not enough and he is beat cleanly.

On the Steelers third offensive possession, Beachum is flagged for holding on second down and after the four yard run by Le’Veon Bell following that penalty, the offense is faced with a third down and 16. Beachum shows his ability to get out into space on the quick wide receiver screen to the left to wide receiver Antonio Brown. While he doesn’t get across of the face of Couples, Beachum forces an over-pursuit and ultimately finishes Couples off after Brown cuts back inside for the first down.

On the first play of the second quarter, Beachum effectively forces Jets outside linebacker Garrett McIntyre all the way around the pocket and that allows Roethlisberger to complete the long pass to Miller for 31 yards. McIntyre attacks from a down wide-9 position and Beachum uses his arms well on the play. The close-up gif shows a bit of a lunge, but Beachum keeps his feet moving and recovers to stop the bend.

I can’t remember where this play was in the sequence, but it is a still shot of Beachum using his arms and punching well. 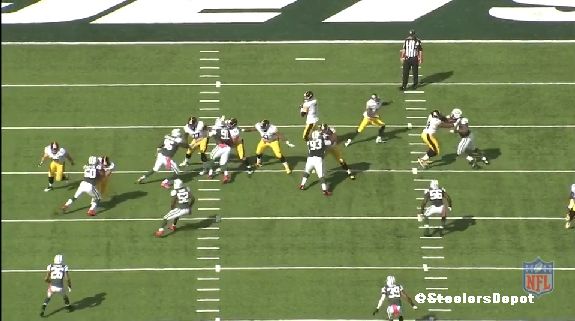 While this next play ultimately ends in a sack of Roethliberger, Beachum clearly does his job on not only one, but two Jets pass rushers. It looks like a stunt gone bad by Couples and Jets linebacker Demario Davis. Protection was shifted to Beachum’s side pre snap and guard Ramon Foster is there if needed should Davis try to twist inside. The footwork by Beachum is great on the pass set and he gets credit for two pass blocks on the play.

While might have been credited as a hurry, Beachum carries Coples inside and across the face of Roethlisberger. It allows the Steelers quarterback the ability to his Brown outside the numbers to his left.

This is not only a good job by Beachum on this next play, but the entire offensive line as well. Beachum, Foster and center Fernando Velasco easily handle the Coples/Muhammad stunt.

The Steelers didn’t run left much in the game, but on this nice fourth quarter run outside by running back Felix Jones, Beachum bangs Coples left at the snap which makes it easy for tight end David Paulson to get his arms inside. Beachum releases to the second level and impedes Davis just enough so that he can’t factor into the play.

Outside of the two holding calls, the false start and the early pressure that almost resulted in a sack/safety, Beachum really played a clean game. He is a very good with his hands and punches well. I really like his wide base and he doesn’t get caught leaning forward or lunging too often. His long legs allow him to get to the edge quickly and he is always moving his feet. He is sound on twist recognition, knows his assignments and always finishes. I would like to see him run block with a little more power, however.

Beachum will next get a chance to handle Terrell Suggs and Elvis Dumervil Sunday against the Baltimore Ravens and that will be a much tougher task then the one he had against the Jets. Should he handle both well, Mike Adams will have a tough time getting his starting job back.