In weeks with multiple sacks allowed by the Pittsburgh Steelers, I’ll be breaking down each individual one, assigning blame, and keeping track of a “sack counter” for the guilty parties. And this week, with five allowed against the Tennessee Titans, was worthy of an article dedicated to it.

Buckle up, this one is a bumpy ride.

13 personnel (1 RB, 3 TEs). Eight man rush with eight Steelers blocking. Just a two man route vs Cover 1, go route with an inside stem for the “X” receiver and a skinny post from David Paulson.

David DeCastro initially chips Jurrell Casey (3 tech) working vs Marcus Gilbert before chipping the one tech to Kelvin Beachum’s side and then finally picking up the blitzing linebacker up the “A” gap.  But on the initial chip to Gilbert’s side, DeCastro steps on the right tackle’s foot and knocks him off balance. Casey is able to split the two leaving him against the tiny Felix Jones.

Jones acts as a buffer long enough to let Gilbert work back to Casey from the side and potentially push him inside enough so Ben can slide around it. But the issue that comes into play is Gilbert being fooled by Ben Roethlisberger’s pump fake to Pauslon, assuming the ball is out, looking downfield, and letting Casey finish running past. The DT drops Ben for a loss. 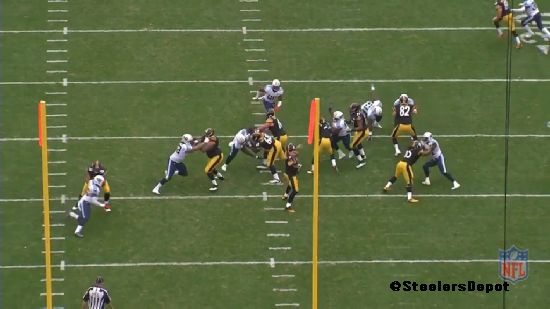 With Big Ben under center, you can never assume the play is over. Gilbert has been around long enough to understand that so the blame is on him.

2. 3rd and 5, :50 1st. Shotgun, 11 personnel. Six man rush with six blocking plus the tight end on a block/release. Nothing available after Ben finishes his drop and with pressure being allowed by DeCastro to the inside, Ben is forced to climb the pocket. That allows OLB Zach Brown the ability to not work through RB Isaac Redman but take a 45 degree angle to Ben after he steps up into the pocket.

Also good coverage downfield from Tennessee. Cover 2 man with two safeties over the top and defenders playing “trail” technique (play to inside hip and protecting against breaking routes) underneath. 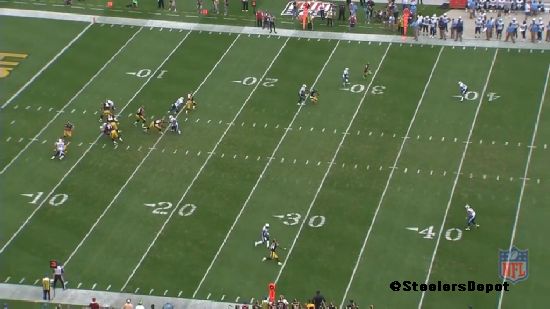 Blame: Half on coverage, half on DeCastro for allowing pressure that forced Ben to escape.

Backside end Derrick Morgan with an inside spin to get past Gilbert and chase Roethlisberger down from behind. Morgan wins the leverage battle here. Gets under Gilbert’s pads and is in control, making it tough for Gilbert to mirror Morgan on the spin.

4. 3rd and 3, 11:02 3rd. Shotgun, 11. Six block vs five rush. Moise Fokou fakes closed “A” gap blitz, dropping on the snap. But because Kelvin Beachum and Ramon Foster have to assume Fokou is blitzing (lineman work inside out, can’t allow “A” gap pressure), OLB Zach Brown is left one on one with LaRod Stephens-Howling.

Brown runs over Howling and sacks Ben. There were other issues on the play, Gilbert again gets beat around the edge by Morgan but Brown is the one that picks up the sack. 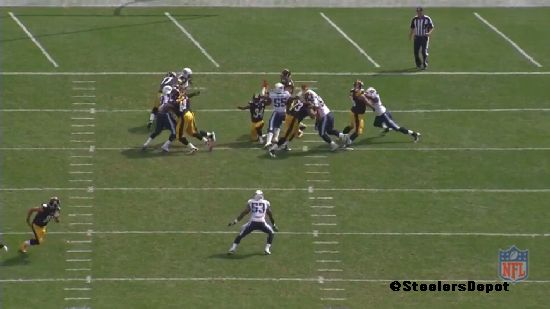 5. 3rd and 4, 5:35 4th. Shotgun, 21 personnel (Jerricho Cotchery is in the backfield but to make the identifying a bit simpler, I consider him to be a back).

Under look with one tech weak in a three man front. Five blocking vs four man rush. T/E (tackle/end) stunt with the DE slanting to the outside in an effort to occupy the LG and the DE looping around to where the LG was lined up.

Picked up pretty poorly by both Mike Adams and Ramon Foster. Foster is able to pass off at the last second but isn’t in position to anchor and gets walked into Ben. Adams is in no man’s land, picking up nobody. 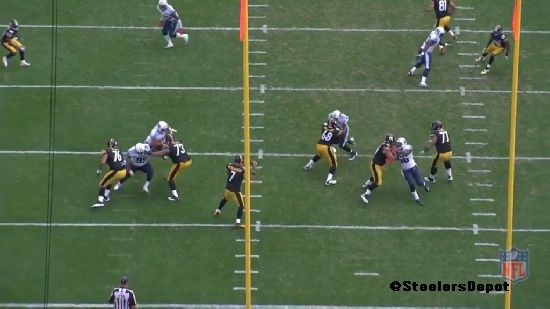 Kelvin Beachum’s low snap didn’t do the play any favors either. It was minor but every fraction of a second counts in the NFL.

Blame: Half on Foster, half on Adams for failed stunt recognition.

No offensive lineman committed a penalty in this game but that is something I’ll keep track of throughout the season as well.