Breaking down the Pittsburgh Steelers sacks from Week 3 versus the Chicago Bears.

1. 2nd and 4, 6:50 1st. 12 personnel. Bears rush five. Julius Peppers engages David Johnson but never actually rushes him so he’s not included in the above number.

Playaction, Steelers fake bucket step on outside zone to the left and pull Ramon Foster. The SAM and MIKE linebackers blitz. Foster doubles the SAM with Felix Jones leaving the MIKE (D.J. Williams) to rush in scot-free. Swats the ball away and the Bears fall on top of it.

Foster gets the blame on this one. Needs to pick up the inside blitzer, work inside out. No need to double the SAM.

Some may contend that looking at the picture, the slide protection leaves Fernando Velasco with no one to block meaning the blame should fall on someone else. But with the bucket step to sell playaction, there’s nothing Velasco can do. No time to have everyone fall back down the line. And if Peppers does rush, odds are Mike Adams will be helping out there, forcing Velasco to pick up three tech Henry Melton.

Bottom line is Foster can’t double. Let Jones block one-on-one. Worst case scenario is there’s pressure from the outside and Ben Roethlisberger is able to climb the pocket and slide away. Mental mistake that leads to a fumble and turnover.

2. 2nd and 5, :07 1st. 21. Six man rush vs five Steelers’ blocking. Left end Corey Wooten does show rush off the snap but after seeing Jonathan Dwyer run his route towards the flats, peels off and has flat responsibility.

Sack occurs quickly enough that it’s a bit difficult to see what Ben’s read was. Spot route at the bottom of the picture between David Johnson and Will Johnson (curl/flat).

Really sound playcall by the Bears. Safety rotation post-snap that no doubt messes with a QB on his drop. Reads Cover 2 pre-snap, SS comes down and you get a Cover 3 look post-snap.

On the defensive line, the closed end slants down one gap with the LB replacing on a blitz. MIKE and SAM blitz and the MIKE is open up the “B” gap. Blitz design Dick LeBeau has run a lot. Lure the guard with the crashing end and run a wide rush with a linebacker to open up the “B” gap. 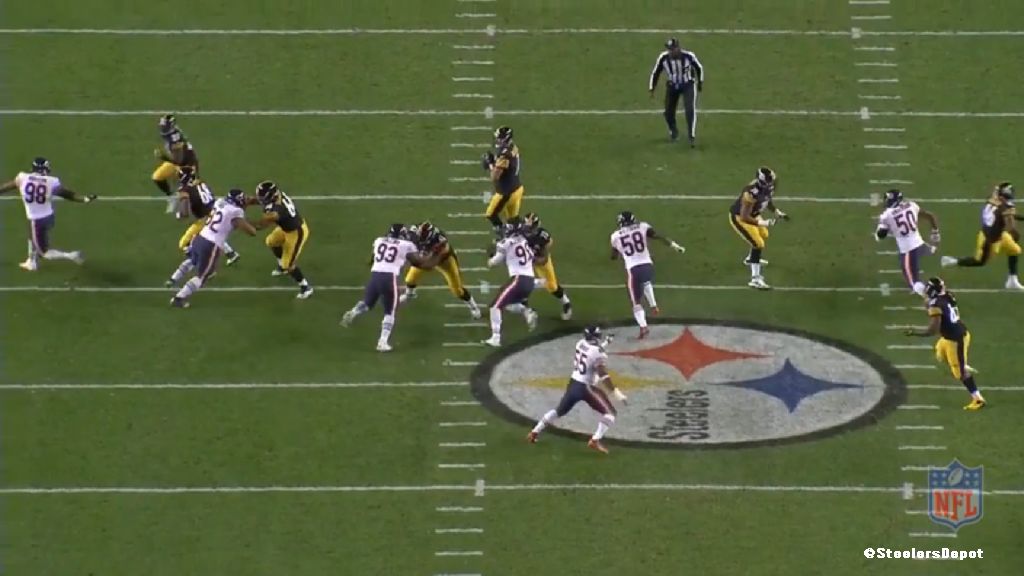 There’s nothing Kelvin Beachum can do even after Wooten peels off. Happens too late for the line to slide back down the other way. And while I preach working inside/out, I don’t blame Adams for taking the wide rusher. So I can’t stick the blame on him.

To me, it’s just a solid playcall from Chicago. Have to give the other guys credit sometimes, too. As of this writing, I haven’t combed through the whole game yet but I’m guessing the Bears have gotten away from their vanilla Cover 2 with the departure of Lovie Smith.

3. 1st and 10, 4:09 4th. Shotgun, 11. Six rushers vs six blocking. Pre-snap, seven on the line for the Bears. Every lineman is covered. DB blitzes off the edge with only the closed “A” gap LB dropping. T/E (tackle/end) stunt on the closed side.

BoB (back on backer) protection with Isaac Redman pitted against Lance Briggs. Does a decent job of getting himself square to Briggs but lunges and doesn’t generate a lot of power. Like an offensive tackle against an end, you can’t bend at the waist. Redman does and Briggs, running at full speed, is able to slide past.

He’s able to get to Ben and knock the ball away, falling into the waiting arms of Peppers who houses it. I didn’t really see Ben holding the football away from his body. He’s trying to tuck it back into his body right as Briggs knocks it away.

So half the blame falls on Redman for not making the play.

But the other half is actually going to go to Todd Haley. I did not like the playcall, and rarely am I critical of a coach. All the different variables that go into a play make it tough to even assign blame to a player, let alone a guy on the sidelines making a call fans aren’t privy too.

The call was a fake bubble screen then throw vertical down the seam. Chicago didn’t bite and Ben was forced to come across the field on his second read.

In a game where every second counts, that makes all the difference between a completion and game-ending fumble.

There’s nothing wrong with the playcall by itself. It’s worked before. Ben had a wide open Emmanuel Sanders on this play in Week One but overthrew him. It went for a gain of 21 against the Cincinnati Bengals.

After giving up the big play the first time around, you can bet Chicago wasn’t going to be fooled again. And they weren’t.

Blame: Half on Todd Haley for the bad playcall, half on Isaac Redman for the lack of execution

Just one. A Ramon Foster hold late in the 4th quarter.

So on the season…