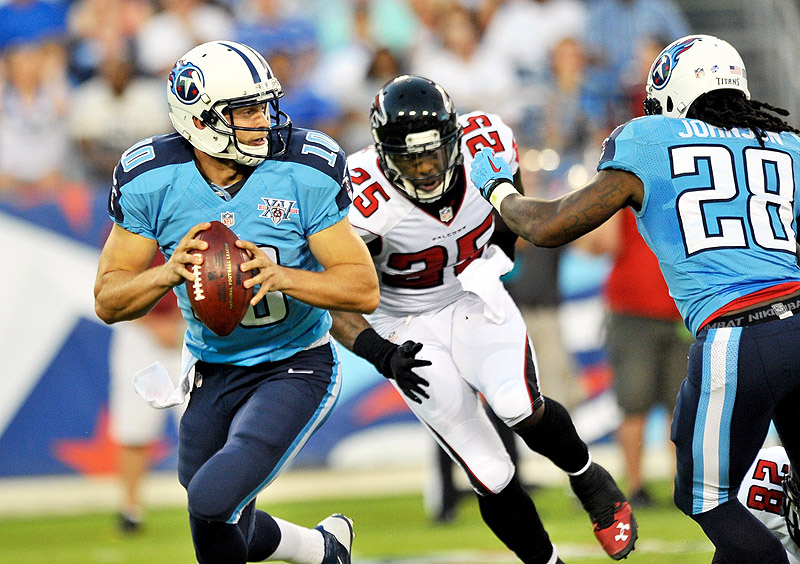 Tennessee Titans quarterback Jake Locker will finally get his first crack at facing the Pittsburgh Steelers Sunday at Heinz Field and while he has developed slow, the Titans are playing to his strengths as heads into his third season. After studying him a bit this past week, the Steelers can’t take him lightly as I feel he might be underrated and certainly enters the 2013 season with a lot of confidence.

The Titans allowed Locker to play quite a bit during the preseason as his 116 snaps were the most played by a starting quarterback. In the four preseason games that he played in, Locker completed 33-of-49 passes (67.3%) for 338 yards with one touchdown and no interceptions.

One of the strong attributes that Locker has is his ability to move and throw outside of the pocket and the first two animated gifs from the Titans third preseason game against the Atlanta Falcons best illustrates this. Both are designed rollouts off of play-action, and both ended in completions.

While we’re talking about play-action, Locker uses it quite a bit and the next two animated gifs show how it buys him time in the pocket for easy completions down the middle of the field.

The Steelers defense, in my opinion, can expect to see quite a bit of play-action Sunday afternoon, and if they don’t do a good job of shutting down the run early, it will open up the field even more for the Titans quarterback.

On top of everything else, Locker’s mobility allows for him to avoid pressure at times. While he does fumble at the end of the play in the last animated gif, he escapes a sack on a corner blitz and uses his legs to nearly gain a first down on 3rd and 7.

The Steelers defense had trouble with quarterback scrambles during the preseason, so it won’t be surprising to see Locker end the game with 20 yards or more rushing if the defense hasn’t improved their ability to spy the quarterback.

In order to best contain Locker, the Steelers need to get the Titans offense in as many third down and long situations as they can. While he is 60.3% on third downs with six or more yards to go for his career, he has also been sacked 13 times and has thrown two interceptions on 80 dropbacks.

To continue to illustrate just how underrated Locker might be right now, KC Joyner, the Football Scientist, wrote in the NFL preview issue of ESPN The Magazine that Locker had the lowest bad decision rate in the league in 2012 — 0.6 percent. While it is a subjective stat, BDR measures the rate at which a quarterback makes a mental error that leads to a turnover opportunity for the opposing defense.

Quarterbacks who have faced a Dick LeBeau led defense for the first time normally struggle, but Locker is anything but a rookie. The Steelers defense has to respect that Sunday in the season opener.