Throughout my regular season recaps, there are certain terminologies I rely on using. While some of you definitely know all of this (and hey, are probably smarter than I am) before we kick off Week One, I wanted to define some of the ones I’ll most commonly use.

Feel free to add any of your own, disagree with mine, and marvel at the Picasso-esque drawings I made in Windows Paint.

Amoeba defense – When I reference it at least, I’m referring to a defense having just one defensive player with his hand down. Common on 3rd and long blitz packages from Dick LeBeau.

Angle/Down Block – Simple block where a blocker blocks a defensive player from an angle, not head on.

Base Block – Solo block by an offensive lineman. Square to the defender.

Climbing the pocket – A quarterback who steps up into the pocket when feeling pressure.

Collapsing the pocket – A defensive player that generates pressure by walking a lineman into the pocket and into the quarterback.

Combo block – Offensive line block that involves the double team of a defensive player with one of the lineman coming off the block and moving to the second level.

Cover 3 – Zone coverage. Typically, the two cornerbacks and a single high safety are responsible for one third of the deep half of the field.

Divide Routes – Any route combination designed to stress the safety. Running a go and post to one side is an example.  Or a “Pin” route (dig + post). Puts the safety in a lose-lose situation with the quarterback targeting the receiver the safety does not go after.

Double Vice – When two jammers take on one gunner.

Fold Block – Offensive line block where two offensive lineman trade assignments. For example, on  “G Lead” the guard to pull to base block the end with the tackle down blocking the defensive tackle.

Gaps – Spaces between lineman/tight ends. “A” through “D” gaps

Gunners – Players near the sidelines on punt coverage. Their job is to be first to be in position to make the tackle or better yet, force a fair catch. Curtis Brown is an example of a gunner.

Getting “washed”  – Defensive lineman or linebacker, getting blown out of a run play by a blocker.

Hangtime – Simple one. Amount of time a kick or punt is in the air.

Jammers – Players opposite gunners on punts. Goal is to “jam” the gunners and not let them make an impact.

Kickslide – 45 degree slide offensive tackles use off the snap.

L1, R1 – The positions for the players on kickoff coverage. Honestly, I don’t know 100% how they call each side but this is the way I’ve always thought of it.

But maybe they’re mirrored so L1 and R1 are immediately to the sides of the kicker, L2/R2 mirrored, etc.

LB Fire Stunt – One of the common Dick LeBeau blitzes. The inside linebackers will cross the “A” gaps in the hope that one of the guards or center fails to switch.

No. 1, 2 receiver – A way of marking where the receivers are lined up. The receiver farthest to the outside is the #1. Next one in is #2, etc.

Opening the Gate – An offensive tackle that takes an angle greater than 45 degrees off his kickslide, opening up his hips. Allows the pass rusher easy access to the inside.

Over Front – Defensive tackles shifted to the strong side.

Point of Attack – Where the OL and DL meet.

Power O – One of the core man run blocking schemes. Usually a double team on the DT with the backside guard filling the “B” gap vacated by the frontside guard on the double team. The popular “22 double” the Steelers ran a few seasons ago was an example of Power O.

Quarters Coverage – Also known as Cover 4. Zone coverage. Each defensive back is responsible for one quarter of the deep half of the field.

Reach Block – Offensive lineman making contact with a defender and then establishing outside leverage, effectively sealing the defensive lineman.

Route Tree – The base nine routes a wide receiver will run. The system is more complex than this but this is the foundation all teams use. A Don Coyrell deciple will use these numbers in his playcalls (famous Bang 8 was a skinny post, because “8” is a post).

Scoop Block – An offensive lineman first establishing outside leverage and then making contact and sealing the defensive lineman.

There is some debate over the difference between a reach and scoop block but this is what I go with.

Sealing the edge – Defensive player, for the Steelers typically an OLB (but not always), holding up on the end of the line the back is running to and forcing him inside.

Second Level – Area where the linebackers are at. So an offensive lineman blocking at the second level is moving downfield to take on a linebacker.

Single high safety – One deep safety. Will get an eight man front with the other safety creeping down in the box, typically.

Smash Route – Another route combination. Curl + corner. Designed to stress the cornerback in Cover 2. If he sinks, throw curl. If he doesn’t, throw corner.

Splashdown – Term I probably won’t use too often but have done it before. The landing point of the ball on a pass.

Strong Side – Side with the passing strength, typically the side the tight end is lined up to. Also known as the “closed” side of the field.

Stunt – A relatively vague term that at its core, just means a defensive player doing something other than shooting the gap he’s lined over in. For example, if a DE slants one gap down, that’s a stunt. Commonly, they’ll work in combination. A defensive end slanting to his outside with an outside linebacker looping to the inside. All in an effort to confuse the offensive line. If just one of the five fail, you’ll generate pressure.

Technique – Name given to defensive lineman based on where they line up.

0 technique: Lined head up over the center

1 tech: Shaded to one side of the center (normally where the NT will line up)
2 tech: Lined head up over guard

3 tech: Shaded to the outside of the guard

4 tech: Lined head up over tackle

5 tech: Shaded to the outside of the tackle (Steelers’ DE will often line up here). And it goes all the way up to the nine tech. So when you hear someone describe the “Wide Nine” (think Jim Schwartz in Detroit) it’s simply saying the defensive is lined up in the “nine tech”. Really far out wide.

Two deep shell – Two safeties deep. In Cover 2, each safety is responsible for the deep half of their field.

Upback – On punts, it is the player closest to the punter. Typically, he has three roles.

2. Blocking call. One color for the center to block right/upback left and vice versa

3. “Set” call. Long snapper able to snap at any point after this.

Robert Golden will likely fill that role this season. 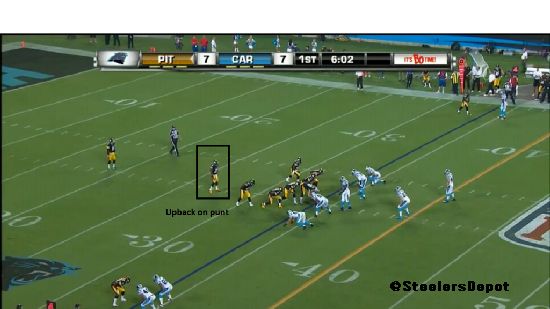 On kick returns, it is the player directly ahead of the kick returner. 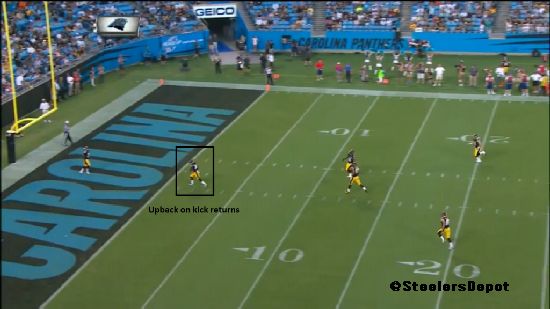 Under Front – Defensive tackles shifted to the weak side.

Waist Bender – Describing an offensive lineman, usually (though not always) an offensive tackle. A player that doubles over and bends at the waist, not the knees. It’s bad technique.

Winning the leverage battle – An offensive or defensive player getting lower than his opponent. Very key.

Zone blocking scheme – Can’t get into all the details but a scheme where there is no assigned hole for the running back to run through. Lineman blocking based on who is covered/uncovered and the running back reads the defensive lineman to tell him where he will run to. Invented by Howard Mudd.