Game notes from the Pittsburgh Steelers Week 3 loss to the Chicago Bears.

– Started the game in nickel. No Steve McClendon or Ziggy Hood. Shamarko Thomas as the nickel back and Cameron Heyward replacing Hood, as he usually does in nickel.

– The power and asset that is Troy Polamalu. Third play of the game. Pre-snap, single-high look with Clark over the top and an eight man front.

Playaction. With Jay Cutler’s back being turned, Troy is rotating into a two deep shell. William Gay now in trail position (play to inside hip of receiver) and Ryan Clark over the top. When Cutler turns around, it’s a completely different coverage.

Tries to force a corner route to Alshon Jeffrey but there isn’t a window. Bracket coverage and the pass falls incomplete.

– Common blitz concept Dick LeBeau has used and one the Bears used later in the game that resulted in a sack. Crash the LOLB LaMarr Woodley into the RG, luring the RT in the process, rush a wide defender (in this case Golden on a dime blitz) and finally bring Troy through the vacated space up the “C” gap to create the pressure.

– What happens when you put Thomas on a player of Martellus Bennett’s size.

Part of the reason why you’re seeing so much of Robert Golden out there.

– Not sure if Lawrence Timmons is supposed to pass the WR off on this 3rd down. Troy initially starts to drive on the RB but drops after seeing the crosser. Indicates pattern reading coverage which is zone but the defenders play man coverage when a defender is in their area. Possible miscommunication here that winds up going for a first down. 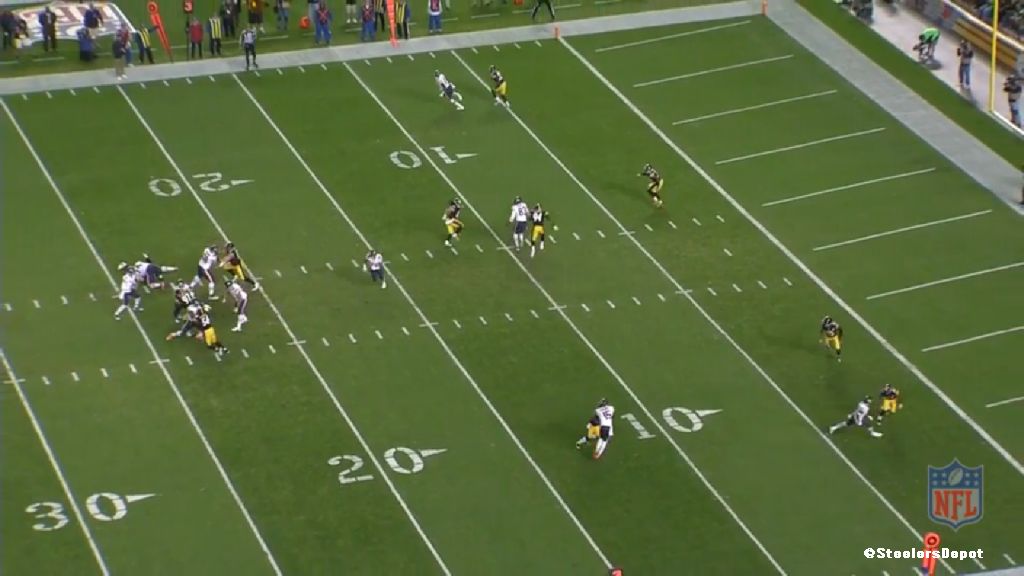 – 3rd and 9 deep ball to Emmanuel Sanders with 4:12 left in the first. Charles Tillman had his eyes in the backfield and Sanders had him beat. Six points if Ben doesn’t overthrow it. Side note. Markus Wheaton in the slot on that play.

– Matt Forte’s 55 yard run. Think it was pointed out during the broadcast but ILB twist. Mills seals Timmons. Leaves Forte one-on-one with Clark who misses the tackle. 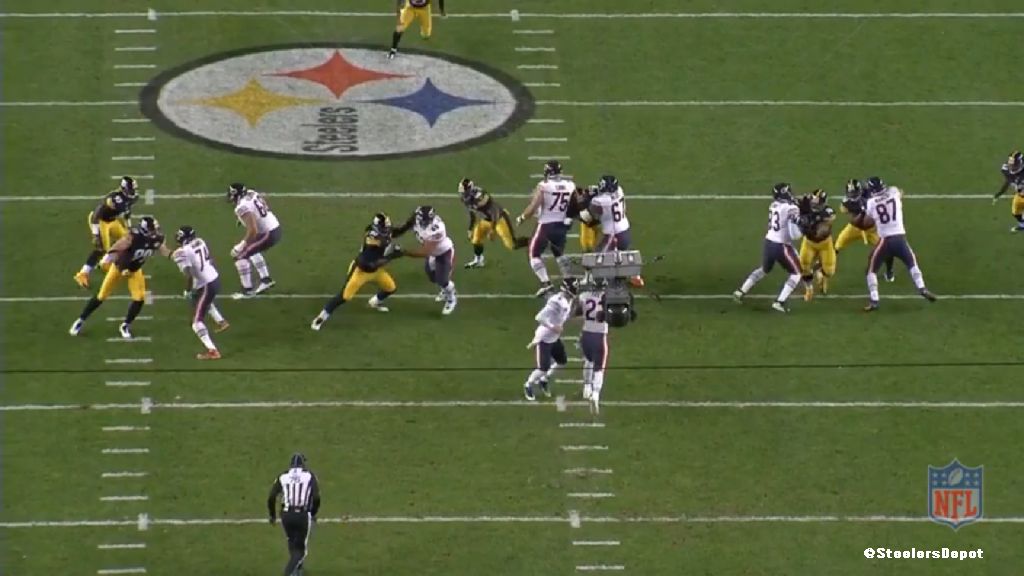 – Thought Ike Taylor did a nice job on the following play even if he was flagged for interference. Brandon Marshall fakes an outside stem off the snap. Most corners, fearing the fade vs a tall wide receiver would open their hips. And when Marshall breaks on the slant, it’s pitch and catch. Not Ike. He stayed square and was able to undercut the route. Too bad he grabbed Marshall’s arm or it would have been a perfect play.

– In the Steelers’ goal line package, there were no cornerbacks. The DBs were Troy, Clark, and Da’mon Cromartie-Smith.

– Starting defense out there on the FG block unit. Not sure if it’s been like that all year or it that is new.

– Antonio Brown 19 yard gain late in the first. Mesh route with Sanders. Staple of Todd Haley’s offense, dating back to his time with Kansas City.

– Agreed with Chris Collinsworth. No clue why the team would run a smoke screen vs two defenders. 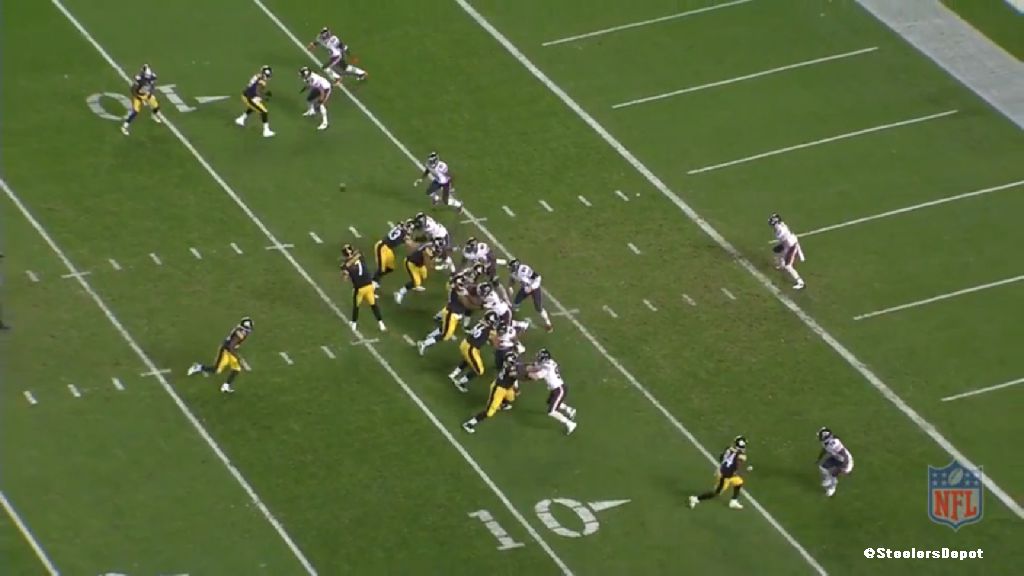 – KO coverage. First time I got a good look at it.

– Curtis Brown a ST demon. Not too many times Devin Hester has gotten tackled at the five like he did on his first return. Even though the kick was off the bounce still impressive and a high-effort play from Brown. Pretty sub-par cornerback but excellent special teams player. Shades of Chidi Iwuoma.

– Didn’t make the tackle on this play but how about Cam Heyward forcing the WR to the inside back to the flow on a screen. Don’t get that from many two gappers. And guess who made the tackle? Brett Keisel.

– Don’t have any empirical data on hand but guessing we blitzed our defensive backs this game much more than either of the first two. LeBeau dialing up his blitzes/pressure.

– Ike/Antwon Blake jammers. Also had a different look on this punt return with Brown/Thomas roughly 15 yards deep. Thomas ends up cutting one of the jammers on the play. New wrinkle. 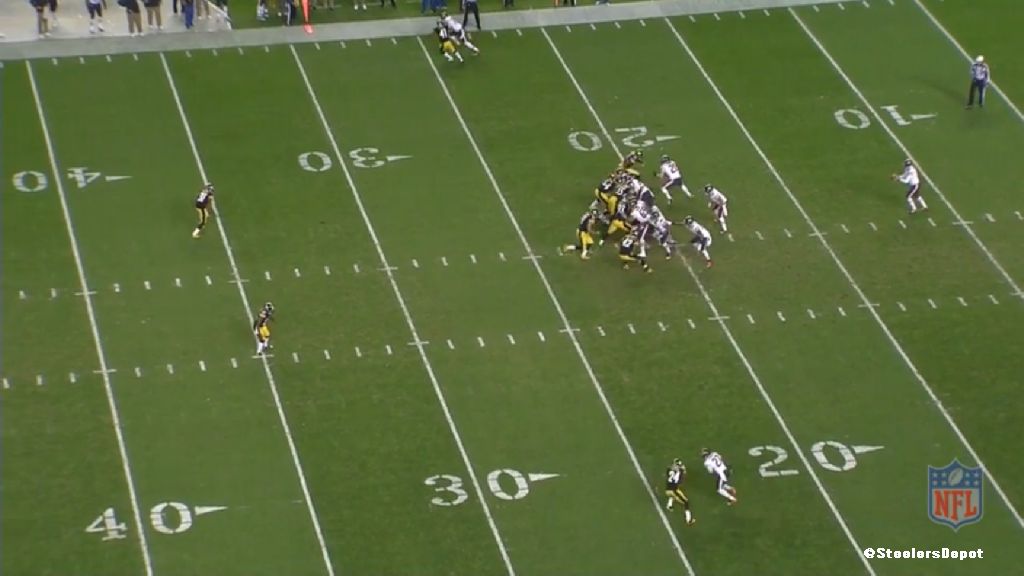 – Stunt pickup was still shaky throughout the game but better. Able to pick up the Bears long winded stunts where they would have a DT loop from one three tech to the other. Progress!

– Major Wright’s pick six. Lot going on here. CB blitz + T/E stunt. Kelvin Beachum tries to pass the tackle off to Foster to pick up the blitz. But Foster is occupied with the looping end. 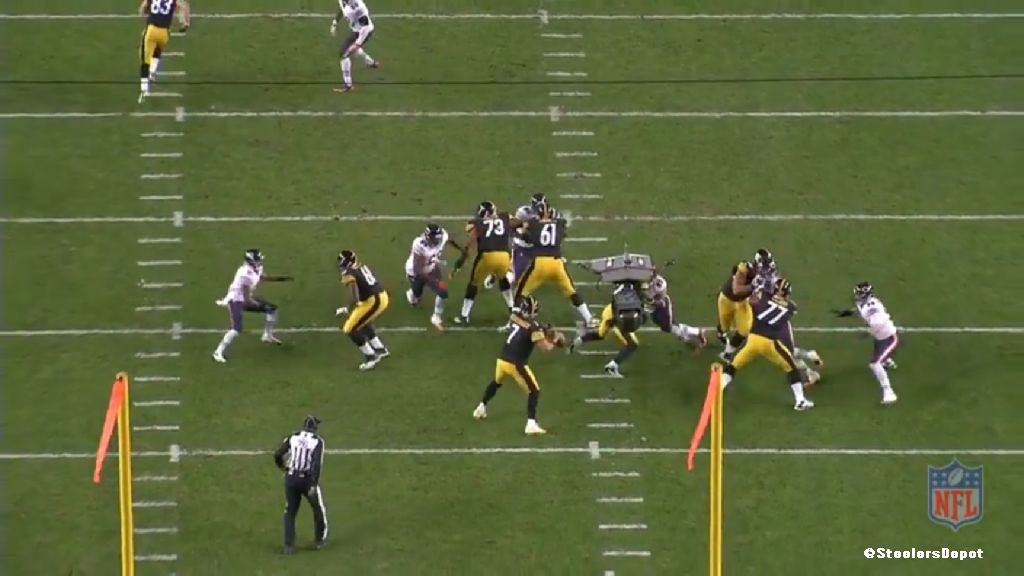 Foster and Fernando Velasco do end up doubling the end and the tackle comes in free, forcing pressure and Ben to get the ball away before he’s ready. Hard to say who exactly is at blame here. Really tough play for Foster to make to pass off the tackle and the end all in a second or two. But obvious confusion that resulted in points for the Bears.

– As usual, Ben audibled as he saw fit vs eight man fronts. Chris Conte walks down into the box. Check the depth of Ben’s left foot before he audible and after. Tell that he switched from run to pass.

– Heath Miller with a false step on block vs Lance Briggs. Enough for the linebacker to blow the play up.

– Antonio Brown’s first TD. Bears rotate from two deep to single high look. Steelers run verticals on both sides to hold the safety so he can’t cheat to one side. One-on-one with Tim Jennings and Brown wins the jump ball. Well done all around. 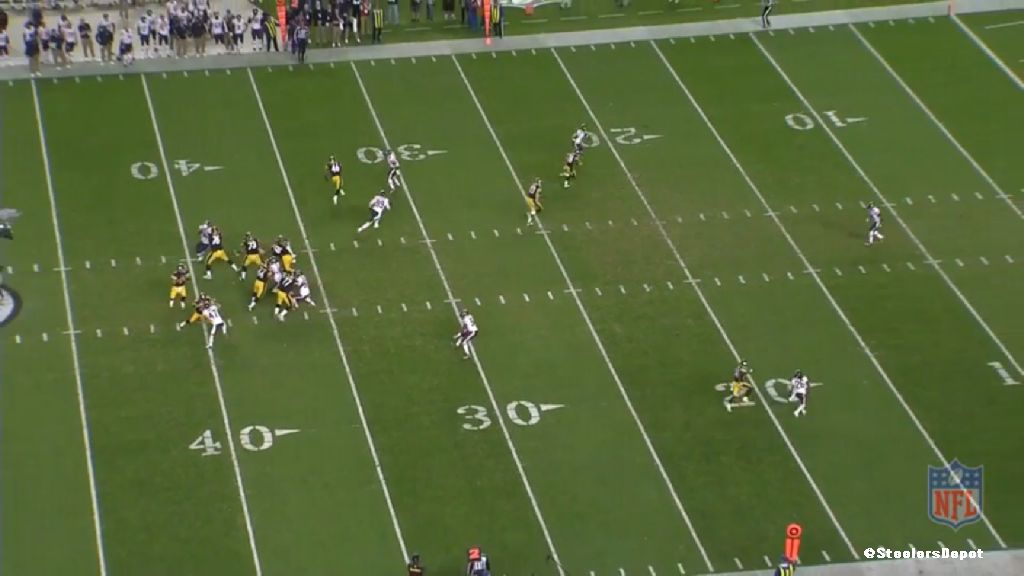 – Much better to pull DeCastro than Foster. Because when Foster pulls, the team ends up doubling the same man and linebackers get to roam free.

– Team still having trouble with simple T/E (tackle/end stunts). Run one here and it’s three blockers vs two rushers. No communication from the left side.

– This is me waxing poetic but love, love, love this run defense. 1:48 left in the half. Jarvis Jones walks his OL into the backfield, disrupting the path of the pulling backside guard. Vince William shoots the gap, open because the pulling guard can’t get there in time, forcing Matt Forte to bounce one gap down. William Gay seals the edge and forces the back upfield for a gain of one.

– Felix Jones returned as the KR to start the second half.

– First pass of the second half. Looping stunt from the open side tackle that no one picks up. Ben forced to evade him and has blindside pressure from Julius Peppers as he shovels the ball to Jones.

– Jones fumble. Not an excuse but Foster falls off his block vs Stephen Paea. Ramon really struggling.

– Sad this is where the Steeler defender that made the tackle on this play (Timmons) was located when Martellus Bennett made this catch on a check down. Four missed tackles before Timmons rides him out of bounds.

– Brandon Marshall made it pretty obvious that the Bears weren’t actually going to go for it on 4th down early in the third. 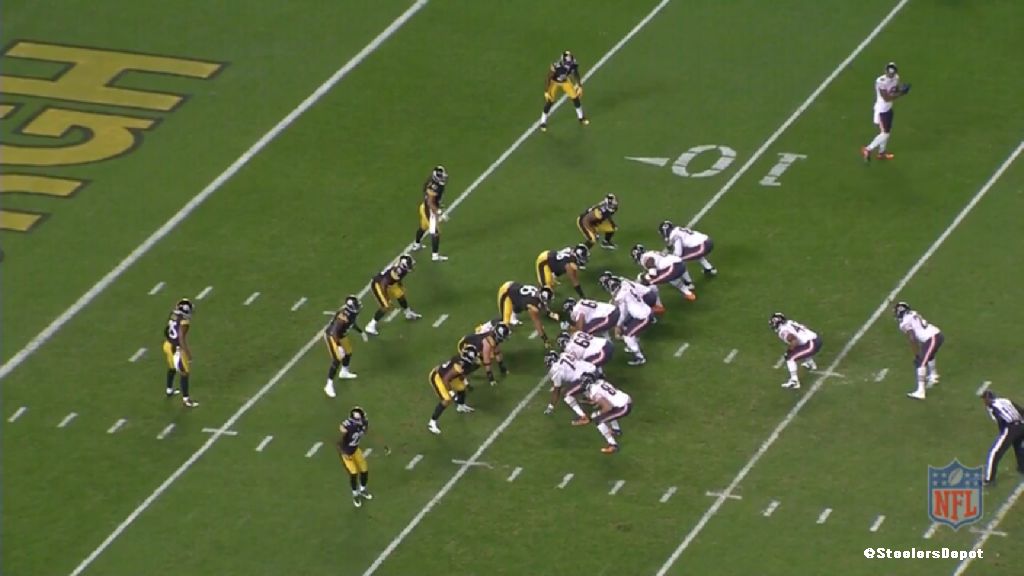 – Paulson, like Miller, with a false step that let Briggs shoot “C” gap, forcing Will Johnson to block him and letting DJ Williams run in free for the tackle on Dwyer. Maybe that’s something that is coached? Shouldn’t be though. Not effective.

– Fake screen, throw vertical to Jerricho Cotchery for a gain of 26. Ran last week for 21. 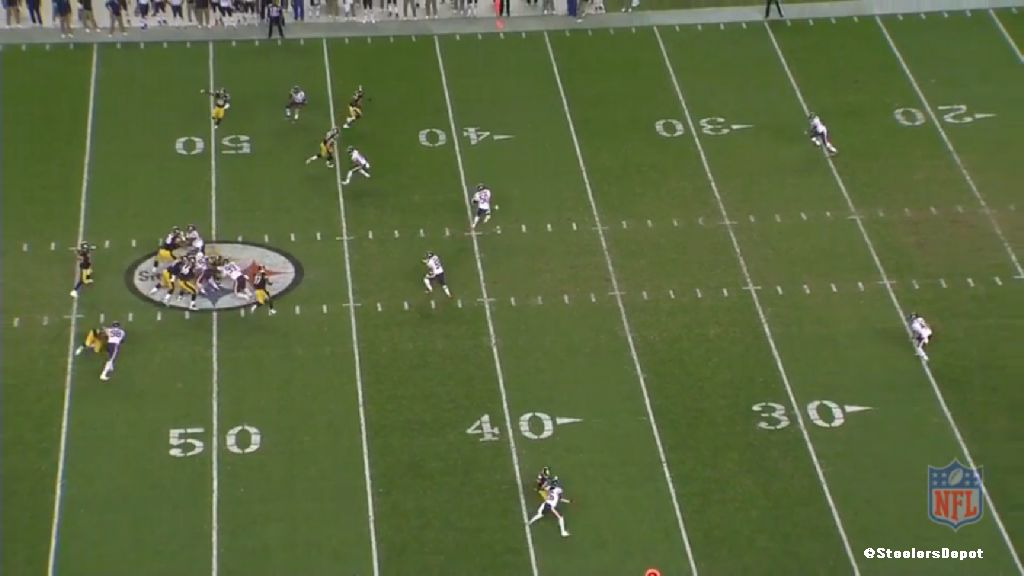 – And again, fake screen that hit Johnson for 19 down the seam. Baffling that Haley tried to call it again on Peppers TD. Not going to fool the Bears a third time.

– Mike Adams played better but abused by Shea McClellin on this spin.

– Nice job from Velasco to take good angle to pick up CB blitz. Also, Bears ran the same exact blitz here as they did on the Peppers TD. Briggs almost gets his hand on the ball here. Game of inches.

– Troy bumped into Thomas running across the field on Cutler’s 3rd down scramble. Don’t know if he would have gotten there in time either way but still didn’t help.

– Earl Bennett’s TD. Lot to talk about here in scheme and technique. First the scheme.

Smash route from the Bears. Curl + 7 route vs single high. Open space in left quadrant of the end zone. Thomas with inside leverage pre-snap which only helps the receiver on his outside release.

But the biggest issue? Shamarko Thomas’ technique. Jams with wrong hand off the snap. As a defensive back, you’re taught to hit with the hand opposite of the receiver’s release. So if it’s an outside release, you hit with your inside arm. That way, your hips open up.

Thomas hits with outside arm. Not strong enough to jam, Bennett blows through, and Thomas is trailing the rest of the play.

– Not sure why Ben hit quick slant on 4th and 10 on the second to last offensive play.

– Timmons flows to the ball vs the run as well as anyone I’ve ever seen. So fluid.

– Offensive tackles did play better. Not excellent but better.

– Vince Williams’ scouting report out of FSU seems accurate. Strong, physical player who gets his nose dirty against the run. Starting to trust himself more and play faster.

– Jarvis Jones still isn’t understanding bend when he rushes off the edge. Needs to play lower.

– Conversely, LaMarr Woodley able to get under Mills all day. Mills is a 5th round rookie so it’s expected for Woodley to have a good day.

– Offensive line still having a heck of a time trying to work to the second level in zone blocks. LBs are running free far too often. Team running the ball much better in its power plays.