A breakdown of every pass Pittsburgh Steelers quarterback Landry Jones attempted against the New York Giants.

– 3 and 10, 3:00. Shotgun, 11. Four man rush. Hard to see any routes downfield. Jamie McCoy and Alvester Alexander on block/release. Checks down and hits McCoy who makes one man miss and pick up the first down.

– 1st and 10, 2:18. 21. Four man rush. Five step with a hitch. Complete on a go route to Markus Wheaton for a 45 yard pickup. But the pass had too much loft on it and Wheaton had to slow down to make the grab, allowing the cornerback he beat to catch up with him and save a touchdown.

– 1st and 10, 1:30. 12. Four man rush. Miscommunication between him and Moye. Jones throwing the out/comeback with Moye looking to run a skinny post. May have stemmed from the Redskins rotating from a two deep to single high safety look right before the snap. Hard to say who was at fault though.

– 2nd and 10, 1:23. Shotgun, 11. Four man rush. The play I mentioned in my game recap that I did really like from Jones. Kelvin Beachum beat around the edge and Jones feels the rush. But he climbs the pocket, keeps his eyes downfield, and hits Moye on a crosser. The footwork wasn’t perfect but in that situation, with pressure and a short throw to an open receiver, I’ll take avoiding the rush and completing the pass.

– 2nd and 8, 12:59 2nd. 21. Playaction booth to the right. Michael Palmer in the flat, hard to tell what route Moye initially runs. And it’s tough to tell if Jones threw it out of bounds or tried to stick it on the sideline to Moye, working back to the QB. Hopefully the former because there was no window to squeeze the ball in but regardless, the ball is thrown out of bounds without Moye able to make a play on it.

– 3rd and 8, 12:52. Shotgun, 11. Four man rush. Divide motion with Wheaton, splits the difference between McCoy on the line and Justin Brown. Ball comes out right after Jones’ hitch to Wheaton on a curl, who dives for a first down. But the play is called back on an illegal hands to the face penalty and the throw negated. Still counting the play.

– 3rd and 18, 12:46. Shotgun, 11. Four man rush with the tackles on a cross stunt. Pressure off the blindside and he again begins to climb the pocket. But I think some panic sets in as his internal clock starts to go off. Doesn’t reset his feet on his checkdown to Jamie McCoy. The pass should have been caught but it was high. Jones’ base is way off (picture below). And while hindsight is 20/20, Jones still had time to keep his eyes downfield before hitting his checkdown. 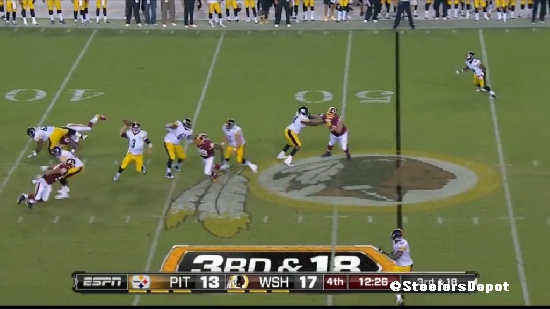 – 2nd and 9, 9:30 4th. 12, playaction. Nearly intercepted by Jerome Murphy. The camera angle makes it really difficult to decipher what Jones saw but one of two things at play.

1. Shouldn’t have thrown the ball as late as he did and the cornerback had time to break on the route

2. Thrown it to the inside shoulder but instead, threw it outside.

– 1st and 10, 7:17 4th. 12. Five man rush and a five step drop. Guy Whimper beat to the inside by 333 pound Chris Baker off the snap. Jones forced to almost immediately scramble and then tosses it at Alvester Alexander’s feet. Sucks too because there was a lot of pre-snap rotation with the FS walking down and then bailing on the snap. Would have been a good test for Jones. Especially when working under center. Has the QB built the muscle memory to quickly drop and read a defense?

– 3rd and 10, 7:11. Shotgun, 11. Four man rush. John Gruden broke this one down pretty nicely on ESPN so I won’t add much. Tries to throw an out to Justin Brown vs corner that is still in his backpedal. Cornerback reads it the whole way, jumps the route, and if he holds onto the pass, it’s an easy pick six. Either Jones can’t throw that ball at all (preferred) or if he does, it has to come out much sooner. The later, the easier it is for the cornerback to break on the ball.

– 1st and 10, 3:13 4th. Shotgun, 11. Four man rush. Throws to Brown on quick out but the pass is too far to the left and bounces off a lunging Brown’s hands. Really didn’t drive the ball very well here and his footwork mechanics are shoddy. The angle does make it tricky (why the All-22 is a Godsend) but his base is narrow. His front foot should be out in front to have proper weight transfer from his back to front foot. Otherwise you don’t get proper velocity on the throw. Picture below. 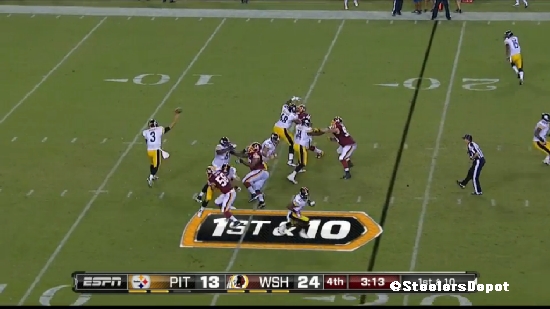 – 2nd and 10, 3:10. Shotgun, 11. Five man rush. Line breaks down, Chris Hubbard beat to the inside and a swarm of three Redskins bring Jones to the grass. The line doesn’t help him out but I think Jones rolled out too quickly here. There’s a pocket he can climb the pocket it. That’s preferred over rolling out because you take away half the field and it allows the ends to easily break free from the lineman and join in on the rush. Climb the pocket, side step if you have to, and keep your eyes downfield. Picture of the pocket he could have stepped into.

Not an easy play, but the ones you have to make at this level. Won’t always get a clean pocket.

– 3rd and 22, 2:44. Shotgun, 12. Four man rush. Go route to Moye that is well out of bounds, no chance for Moye to even make an attempt on it. Tough down/distance but one thing I didn’t like was Jones staring Moye down. Lets the safety read him the whole way and if the throw would have been on target, the safety is taking Moye’s head off. In the NFL, you’re no longer to throwing to open receivers but open spots. And sometimes you have to manipulate the safety to create those spots.

– 1st and 10, 2:14 4th. Shotgun, 11. Five man rush. Joe Long gets beat really badly. No chance for Jones to climb here. Forced to roll out to his right and actually makes a nice throw on the run, nearly completing it to Alexander on the sideline. Good throw that only shows up as an incomplete pass in the box score.

– 1st and 10, 1:59. Shotgun, 11. Four man rush with DTs cross stunting. A dangerous throw he shouldn’t have made, trying to hit Moye on an out. OLB is dropping into hook zone and usually will sink to protect curl and force the flat (especially late in the game up by two scores). Cornerback over the top.  Jones tries to force the throw in. It’s magically tipped by the OLB and into Moye’s hands. Probably would have been picked by a more talented OLB than a 3rd stringer late in a preseason game. Justin Brown on a dig would have been a much better option.

– 2nd and 10, 1:22. Shotgun, 11. Five man rush. High snap from John Malecki. Incomplete on curl to McCoy. More miscommunication between the two and you can see them gesturing to each other after the play. Looked like Jones was expecting McCoy to settle down but the tight end runs away from the linebacker.

– 4th and 5, :55. Shotgun, 11. Four man rush. Seems to read the whole field (or he could just be staring down Justin Brown on a crosser) and then comes back to his left. Nothing available and with pressure coming his way he fires it over the middle. It’s tipped away and that’s the game.

Watching the game live, I thought Jones had a good game. But after re-watching and combing through it, it was an average to below average performance. There were only a handful of “plus” plays and he didn’t make a throw that wowed me all night. Showed an average arm and his footwork only compound that problem (of course, when those get cleaned up, his throws will gain velocity). He had trouble reading defenses, his pocket presence was average at most, and he should have been intercepted two or three times. Still a long ways to go, of course, and he didn’t run into his own running back (progress!) but a pretty poor day for the fourth rounder. The box score should have looked even worse.