Below is a breakdown of the snaps played by Pittsburgh Steelers guard Ramon Foster versus the Kansas City Chiefs.

– 1st and 10, 10:51 1st. Zone run with Foster working down the line. Maurkice Pouncey blocking the one tech and Mike Adams cutting the DE. Foster ends up cutting the player Pouncey is engaged with which apparently isn’t a chop block since it’s one player over.

– 2nd and 8, 10:11. PA. Facing a bullrush. Absorbs well and mirrors Allen Bailey’s attempted swim. Did double over but still mirrored and then buried him in the ground.

– 1st and 10, 9:24. Nose tackle and strong side defensive end are working as one techs. But it isn’t a Bear front. Foster bases the “DE” Dontari Poe who easily sheds him.

– 2nd and 9, 8:45. Doubles the one tech Poe with Pouncey. Jonathan Dwyer bounces it outside to the right for a first down.

– 1st and 10, 8:00. Pass protect. Three OL vs two DL with Foster working on Bailey before peeling off to shove Tamba Hali and give Adams some assistance.

– 2nd and 4, 7:20. Starts to work to the second level down the line but no one around. Eventually finds and briefly sticks to Derrick Johnson before the play is over.

– 3rd 5, 6:35. Taking on Tamba Hali in pass protection. Ball out quick on an to Antonio Brown so not much to note. Pass incomplete.

– 1st and 10, 5:12 1st. Pass protection. Poe tries to bull rush and Foster absorbs it really well. With just a four man rush, Pouncey helps briefly before the ball is out.

– 2nd and 10, 5:07. Facing power/bull rush. Gives a little bit of ground (understandable) but really good bend, butt down, knees bent, and doesn’t get walked into the pocket.

– 3rd and 5, 5:03. Bailey on a bull rush. Doubled by him and Pouncey. Foster again shows proper bend. Not too tall, not doubling over at the waist.

– 1st and Goal, 4:20. Combo block. Briefly doubles DE before moving onto the second level. Doesn’t pick anyone up there, however.

– 2nd and Goal, 3:38. Pass. Derrick Johnson comes on late blitz and drops Ben Roethlisberger. Pointed this out in my game recap. Play designed to get the ball out quickly, likely to David Paulson in the flats. Should work inside out and take the inside rusher which is Johnson. Doesn’t and I put the blame on him for the sack. 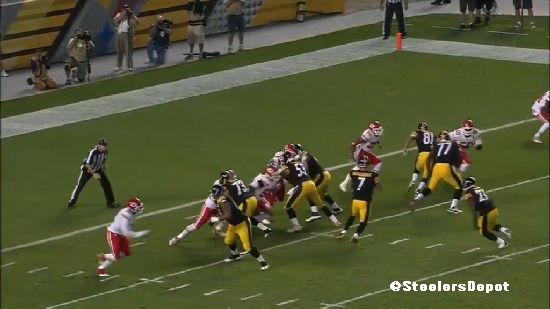 – 3rd and Goal, 3:01. Three man rush from KC. Poe basically in contain, mirroring/spying Ben. Not much going on.

– 3rd and 3, :44. Chiefs overload blitz to the right side. Foster and Adams double Poe. Keeps him at bay.

– 1st and 10, :07. End around to Wheaton. Gets inside leverage on Mike DeVito and shields him.

– 2nd and 8, 13:35. Playaction. Holds up well in pass protection. Again, his base is solid, and his butt is down. Miley Cyrus would be proud. Play negated on a chop block.

– 3rd and 18, 12:28. Screen to Jonathan Dwyer. Brief block against Poe. Not much else going on for this screen to the right.

– 2nd and 9, 7:36. Playaction. Initially chips Poe and then follows Adams/Hali to provide support. Not surprising considering Adams’ struggles vs the OLB. But doesn’t get to them with Hali coming around the edge.

– 1st and 10, 6:03. Draw. Base blocks DE. Shows his strength, gets his legs underneath, and gains inside leverage on an inside run. Finishes by burying DeVito into the ground.

– 3rd and 9, 5:14. Derrick Johnson lined up head-on. But he drops into coverage on the snap and there’s no one else for Foster to pick up.

– 1st and 10, 2:57 2nd. Bull rush from Bailey. Does get into Foster’s chest and gets him upright but he has enough strength to avoid getting put on skates.

– 1st and 10, 2:00. Poe bullrushes and puts a good jolt into Foster. But he maintains his base and with some help from Pouncey, doesn’t let Poe get any pressure.

– 2nd and 5, 1:36. Really good arm extension and first punch by Foster. Knocks the 346 pound Poe off balance. Not much else to note with a safety blitz ending the play but a good one from Foster.

– 3rd and 13, 1:29. Draw off the left side. Justin Houston lined over him and with Foster having to show a pass set initially, isn’t able to stick to Houston once Felix Jones bounces the run to the outside and Houston doesn’t need to work through the left guard.

– 1st and 10, 14:56 3rd. Poe slides down one tech to the one tech right before the snap. Pouncey chips him and again, Poe is turned and it’s an easy cleanup for Foster. Just bad technique from Poe.

– 2nd and 6, 14:17. Power O. Combo against the DE and then works to the second level but only engages LB Akeem Jordan for a moment before the whistle.

– 1st and 10, 11:18 3rd. Power O with Foster leading. Kicks out and sticks to 2nd team LOLB Frank Zombo. Shows his mean steak and finishes the play by pancaking him and apparently has a celebratory chest bump with Mike Adams. No word what that registered on the Richter Scale.

– 2nd and 3, 10:40. Power O again with Foster leading the charge. Same play, same result. Kicks out the OLB and buries him into the ground.

– 1st and 10, 9:57. Uncovered pre-snap. Chips Bailey and tries to work to second level but doesn’t engage a defender.

– 2nd and 7, 9:13. Draw. Base blocks safety who crept up into the box. Looks like another pancake on first look but I’m pretty sure the safety tripped over the defensive end’s foot. Play negated by a Pouncey hold.

Foster is a box of Cheerios. Doesn’t possess the flash and excitement of Fruit Loops or Lucky Charms but is serviceable and you can’t come up with any complaints against him. He isn’t a star athlete nor Larry Allen strong but rarely played with poor technique and in general, did his job. The back-to-back pancakes on Power O were really encouraging to see albeit against a second stringer. That was my biggest concern of letting Colon go over Foster.