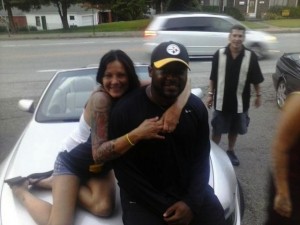 You never know what kind of pictures will surface on the internet these days thanks to the instantaneous social media world that we now live in. The latest surprise photo comes courtesy of Deadspin and it features Pittsburgh Steelers head coach Mike Tomlin getting some love from a fan.

According to Dom Cosentino, Tomlin popped into the Mt. Royal Inn in Etna, Pa. to buy a few a few six packs of beer. While in the establishment, the Steelers head coach bought a round of drinks for the patrons before exiting and having this photo snapped of him with a female fan.

Obviously, there is nothing to read into this photo and I am sure that Mrs. Tomlin has absolutely nothing to worry about. In addition, Tomlin is not wearing a “Free Hernandez” hat, so that too is good news.

EDITED TO ADD: A commenter on Deadspin claiming that he is the guy in the background of the photo wearing the cargo shorts, says that Tomlin did not buy 2 six packs, or buy the bar a round. The commenter goes on to say that he talked to Tomlin the whole time and that he had a few beers, and “is an awesome dude!!”