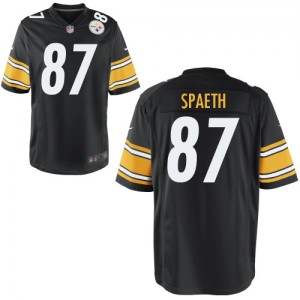 After spending the last two seasons with the Chicago Bears, veteran tight end Matt Spaeth is back with the Pittsburgh Steelers after signing a two-year, $2 million contract early on in free agency. In an interview this past week with David Todd of 970 ESPN Radio, Spaeth talked about what kind of team he is returning to in Pittsburgh in contrast to the one he left following the 2010 season.

“It\’s a much younger team,” said Spaeth, who was originally drafted by the Steelers in the third round of the 2007 NFL Draft out of Minnesota. “I left a team that had tons of veterans and tons of veteran leadership, and I was the guy that looked up to those guys and leaned on those guys. And now it\’s a little different feel because I\’m one of the veterans. So I\’m definitely trying to take on much more of a leadership role helping out the young guys and doing whatever I can to help this team win.”

During his two seasons with the Bears, Spaeth was the backup to starter Kellen Davis and recorded just 13 catches for 78 yards and three touchdowns in 31 regular-season games. Despite mostly seeing playing time in two tight end sets; however, Spaeth told Todd that he thinks he developed his game while away, as he was forced to do things that he didn\’t get a chance to do previously with the Steelers.

“I think I\’m a little more versatile,” said Spaeth. “I did a lot of different stuff that I wasn\’t used to there. I played the “F” tight end (the tight end off the ball – the move guy) a little bit more than I ever have, I guess.

“Here I was always on the line, so there I got to do some different stuff and started getting pretty good at it, so I feel like I\’m a little more versatile.”

The last time Spaeth was with the Steelers, the offense mostly used a man blocking scheme in conjunction with some inside zone. Now that he has returned, the Steelers are expected to run more outside zone than ever before, and Spaeth was asked if that\’s new and different for him.

With veteran tight end Heath Miller still recovering from his serious knee injury that he suffered late last season, Spaeth is sure to get a lot of playing time early on in 2013 even if Miller is ready to play come the season opener. While second-year tight end David Paulson did progress during his rookie season, he is nowhere close to being as good of a blocker than either Miller or Spaeth currently are.

With the Steelers expected to use more outside zone in 2013, Spaeth should fit in nicely. Last season with the Bears, Pro Football Focus rated him as the top run blocking tight end in the league based on their grading system. While I dispute he is the best in the league, he is certainly more than serviceable and when you add in the fact he was able to play more on the move while with the Bears, he probably returns to the Steelers as a much more well-rounded tight end than he was when he left.

Last offseason the Steelers chose to sign Leonard Pope to be their second tight end and that wound up being a waste of a roster spot, just as I predicted it would be. Spaeth is most certainly a huge upgrade over Pope at the tight end position and an even bigger upgrade when it comes to playing special teams.

While nobody wants to admit it, Spaeth was perhaps the Steelers second best free agent signing behind cornerback William Gay during the offseason and his ability to take on a leadership role in 2013 will certainly come handy on offense in addition.