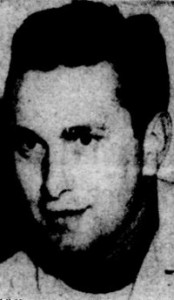 John Alderton, the Pittsburgh Steelers seventh-round pick in 1953 NFL draft, passed away this past week at the age of 81 in Cumberland, Maryland.

Alderton, a defensive end, played his college football at Maryland where he was a co-captain of the 1952 team that went undefeated and won the Sugar Bowl.

Alderton, who wore No. 83, only played one season with the Steelers before joining the Air Force where he played football at Bolling Air Force Base, Washington, D.C., for two years. During his Air Force years, Alderton became an offense tight end and was known as one of the top receiving threats in service football.

After serving his country for two years, Alderton signed on to play with the Calgary Stampeders in 1956, but a dislocated left shoulder cut his playing career short.

Prior to his passing, Alderton was listed in the top 500 oldest living Pro Football players.

A funeral service will be conducted for Alderton on Saturday at the Adams Family Funeral Home in Cumberland with an interment to follow at Saint Mary’s Cemetery.

According to my research, at 91 years of age, Leon Pense is the oldest living former draft pick of the Steelers. Pense was drafted by the Steelers in the ninth-round of the 1945 NFL draft.