Pittsburgh Steelers nose tackle Alameda Ta\’amu was in the news this past week as he received 18 months probation for driving under the influence and crashing into several parked cars last October. So how is Ta\’amu celebrating his slap on the wrist? According to a picture that he retweeted Sunday night on his Twitter account, he is driving around with a friend who is holding a bottle of Fireball Cinnamon Whisky. 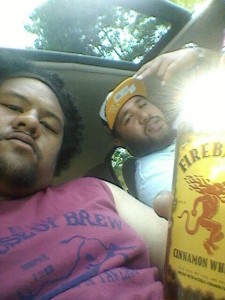 Now we don\’t for sure if Ta\’amu is drinking the whisky, but this is certainly not the kind of message that a person such as himself wants to be sending considering all that he has gone through recently.

We don\’t know who @ME0ish is, but judging by his timeline on Twitter, he isn\’t someone who Ta\’amu probably needs to be hanging around with.

Ta\’amu was suspended for two weeks without pay by the Steelers following his incident last season. A few weeks after being reinstated to the team he was waived and signed to the practice squad until the final week of the regular season. He is currently back under contract for the 2013 season, but that means absolutely nothing at this point.

Thanks to his indiscretions last season, Ta\’amu never dressed for a game. The way things are looking right now; he never will. The Steelers fourth-round draft pick from last April must have missed the message that the team sent earlier this offseason when they released their fifth-round draft pick from last April, running back Chris Rainey, following his arrest in Florida just after the end of the season.

Up until this point, I have not factored in the possibility of the Steelers drafting another nose tackle in the upcoming draft. Perhaps I should start. Behind current starter Steve McLendon sits Ta\’amu and Hebron Fangupo, who they claimed off of waivers from the Seattle Seahawks late last December. Those two don\’t necessarily give you a good sense of depth security right now.

Perhaps the Steelers should sign back veteran Casey Hampton for one more season and indeed address the nose tackle position once again in the draft. I would go ahead and cut Ta\’amu right now and let Fangupo battle in training camp.

I understand that Ta\’amu is just a kid, but it certainly appears that he hasn\’t learned his lesson. How stupid can one person be?