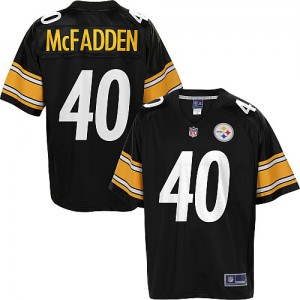 The Pittsburgh Steelers made a pretty strong statement earlier this month when they decided not to tender former fifth round draft pick Stevenson Sylvester. It wasn\’t so much that Sylvester had done anything in his three years to warrant tendering, more than it was the fact that the Steelers appeared to be very thin at the inside linebacker position.

The Steelers started the offseason with only Lawrence Timmons, Sean Spence and Marshall McFadden under contract for 2013. Spence, as many of you know by now, might never play again due to the nerve damage that he suffered to his knee last preseason. Shortly after the season ended, however, the Steelers added castoff inside linebackers Brian Rolle and Kion Wilson to the roster and eventually signed re-signed Foote just over a week ago.

I have already posted my thoughts on Rolle recently, but what about McFadden? Could he be the reason that the Steelers let Sylvester just walk away?

McFadden had a tough road to travel to get where he is now. He was one of the many undrafted players that fell through the cracks during the 2011 lockout. Despite being out of the game for a full season, Dan Rooney Jr., who scouted McFadden when he was at South Carolina State, made it a point to get McFadden a workout last offseason and it led to him being signed to a futures contract as a result.

Buried on the depth chart in training camp, McFadden only saw playing time in the preseason late in games, but he made the most of his opportunities at both the BUCK and MACK positions, and also on special teams. In fact, McFadden led the Steelers in preseason tackles with 15 total, 13 of which were considered solo. He also made the defensive calls late in those games in addition.

Despite his solid preseason showing, the numbers did not allow McFadden to stick to the 53 man roster, but he was signed to practice squad immediately after the final roster cut-down. He remained on the practice squad until Week 11 when he was promoted to the 53 man roster after outside linebacker Chris Carter was placed on inured reserve with an abdominal injury. In his first NFL game against the Baltimore Ravens, McFadden played on special teams and cracked the stat sheet with an assisted tackle on the opening kickoff of the second half.

McFadden very well might have stayed on the Steelers 53 man roster for the rest of the season, but the injuries suffered by quarterback Byron Leftwich and wide receiver Jerricho Cotchery in the loss to the Ravens resulted in the linebacker being shuffled back to the practice squad the next week.

McFadden was again promoted to the 53 man roster in the final week of the season, but an abdominal injury that suffered leading up to the game against the Cleveland Browns resulted in him missing the game.

McFadden\’s ability to play both inside linebacker spots, combined with his year experience in the defense, will give him a solid shot at making the Steelers 53 man roster in 2013. He told me recently that he is currently working out in North Carolina at Velocity Sports and knows that this a big year for him.

Due to the lack of numbers at the position, the Steelers are very likely to add an inside linebacker at some point during the draft and one or two more after the draft as well. Should McFadden pick up in the mini camp practices where he left off last preseason, he should have no problem making the 53 man roster, especially if he if impresses new special teams coach Danny Smith along the way.

Should the Steelers hold off drafting an inside linebacker until the later rounds next month, it\’s likely because they have a plan already in place. A Marshall plan.