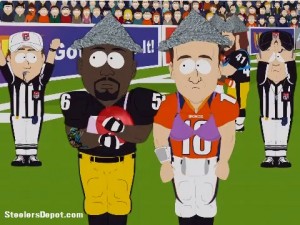 Wednesday was the season premier of South Park and the long-running cartoon started the season off by mocking the NFL and their stance on concussions, as well as the recent replacement referee debacle.

The episode centers around Randy Marsh, who’s frustrated about the excessive safety measures in football. Marsh offers up sarcastic solutions to the problem such as players playing with a balloon instead of a football while wearing bras and tin-foil hats. Of course nobody gets his sarcasm and thus Sarcastaball is born.

In the episode Marsh becomes the head coach of the Denver Broncos and of course they play the Pittsburgh Steelers in Sarcastaball. Linebacker LaMarr Woodley is depicted in that game segment complete with a tin-foil had and his tattoo. He receives the balloon from Broncos quarterback Peyton Manning and of course the replacement refs do not know how to rule the play.

The episode also features New England Patriots quarterback Tom Brady drinking a giant bottle of Butter\’s Creamy Goo. I am not going to explain this one, but it is quite hilarious. You can watch the video clip featuring Woodley below and I highly suggest you tune in and watch this episode.