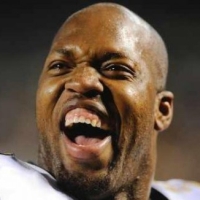 NBC 4 in Washington, D.C. reports via their website that Baltimore Ravens fans may have been exposed to rabies during their second preseason game at M&T Bank Stadium this past Friday night against the Detroit Lions.

The website reports that a bat landed on a person in the stands who proceeded to just brush it away. Authorities were unable to capture the bat for testing and The Maryland Department of Health is asking anyone who may have come into contact with a bat to contact their local health department.

Although no description of the bat was given, it likely weighs 260 pounds and is 6 foot, 3 inches tall and looks like Mushmouth of the Fat Albert gang. The bat likely does not move very well on the ground after injuring its Achilles in an offseason pickup basketball game, which the bat denies ever happened. The bat in the past has been known to also verbally place bounties on NFL players.

This bat is pretty much harmless, as its grotesque appearance is much worse than its bite. The bat also can be recognized by its lack of Super Bowl rings and crab cake stench, and is also known to like useless baths in Gatorade.

The bat is considered harmless to any fans of the Pittsburgh Steelers unless they are offended by jealousy.

In closing, if you need to seek refuge from the Baltimore bat, just go to your closest football field, because the bat will not be able to get close to one for the foreseeable future. Steelers left tackle Max Starks has been summoned to capture the bat in hopes of owning it.