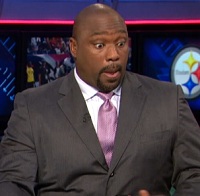 I think Warren Sapp is a funny guy. Really, I do. Also, as a former player he knows his X\’s and O\’s, so anytime he breaks down tape, I thoroughly enjoy it. What Sapp is not good at, is having a firm grasp on teams around the league from a personnel standpoint. He has shown this time and time again and recently made himself look like a fool, yet again, on the Thursday edition of NFL Total Access.

While trying to explain why the Pittsburgh Steelers will not be an elite team this season, Sapp points to the Steelers having a new first year right guard, who he referenced as a second round pick that would be replacing Chris Kemoeatu? What? Really Sapp? David DeCastro, perhaps you heard of him, was a first round selection, not a second. Replacing Kemoeatu? What? Kemoeatu played left guard his entire career. DeCastro, should he win the starting spot out of training camp, would be replacing Ramon Foster, who finished the 2011 season at right guard, the same right guard spot that has been in flux for the last several seasons in Pittsburgh and thus the reason that DeCastro was drafted.

At the end of the segment, Sapp also made himself look like a fool again. Hard to do, right? Sapp drives home one more final shot at the Steelers by saying that they intend to anchor the middle of their 3-4 defense with a 280 pound nose tackle named Steve McLendon. He then raises his eyes in horror. Well, he did get half of that right. McLendon is likely the man that will be relied on heavily be the starter this year at nose tackle, at least until Casey Hampton is back to full health. McLendon, however, does not weigh 280 pounds anymore. Perhaps the computers at the NFL Network are down. McLendon weighed over 300 pounds at the end of last year and now tips the scales between 320 and 325 pounds. That\’s 40 to 45 pounds difference there, Warren.

Face it Warren, you have admitted to me in the past your bias towards the Steelers. You\’re a Dallas Cowboys fan. I accept that, but if you are going to keep discrediting yourself to support your bias, I will continue to call out for it.