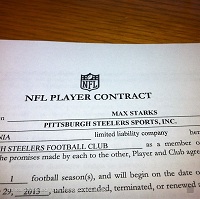 He\’s back! On Tuesday Bob Labriola reported via Twitter that the Pittsburgh Steelers have signed tackle Max Starks to the 90 man roster, a move I have projected to take place for some time now.

Starks said on Twitter just prior to the announcement that he had a good visit with the doctor today and has evidently been cleared to practice after tearing his right ACL in the AFC Wild Card game against the Denver Broncos last January.

The signing of Starks gives the Steelers well needed depth at the tackle position now and Starks very well could be the week 1 starting left tackle depending how rookie second round draft pick Mike Adams performs in training camp. Starks can play both tackle spots, which further improves the Steelers depth as well.

The signing of Starks also makes it even more likely that the Steelers will part ways with Jonathan Scott, who is scheduled to count $2.7 million against the salary cap this season. By releasing Scott, the Steelers will clear an additional $2.2 million in cap space that can be used to sign wide receiver Mike Wallace to a long-term deal.

It's a great day, doc gave me a great report! On my way to being game ready!