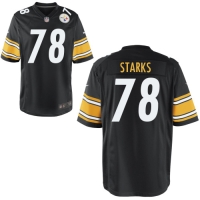 If you have read Steelers Depot for some time now, and listened to our podcast, you know that I am in no way surprised that the Pittsburgh Steelers brought back tackle Max Starks today on a one-year deal. It wasn\’t a matter of if it would happen, only a matter of when, in my opinion.

With Starks now back in the fold, it once again gives the Steelers the opportunity to give life to dead salary cap money that was created when Starks was released at the end of July last offseason. When Starks was released it created dead money charges of $2 million in both 2011 and 2012, because of the left over amortization amount of the $8 million signing bonus that he received with his new contract back in 2009.

The Steelers of course brought back Starks last season on a one-year contract for the minimum following the week 4 loss to the Houston Texans. The contract essential counted $619,000 against the 2011 salary cap and thus helped the Steelers feel like they were getting some worth out of the $2 million dead money charge. Starks played well upon his return and helped stabilize the offensive line some in the process. Essentially Starks cost the Steelers $2.619 million in 2011 and I feel they got their moneys worth.

Had Starks not torn his right ACL in the AFC Wild Card game against the Denver Broncos this past January, it was a good bet that the Steelers would have brought him back for one more year, even after drafting Mike Adams in the second round of the draft. The torn up knee of course threw some degree of uncertainty into the picture, because it all became predicated on how quickly he could rehab.

With Starks now back under contract, the Steelers once again have a shot at giving life to the 2012 portion of his dead money. While financial details of the one year contract that he signed today have not been made public yet, it is believed to be a qualifying contract of $825,000. The max amount of signing bonus that Starks can receive with that type of contract is $65,000, so that means his 2012 salary cap charge will be no greater than $605,000, because of the discount allowed with that type of deal.

Should Starks indeed make the 53 man roster out of camp, he essentially will cost them $2.605 million against the 2012 cap. If he doesn\’t, the Steelers will only be on the hook for the amount of the signing bonus they game him on Tuesday, if any, along with the $2 million in dead money that was there to begin with.

Currently, Starks is just 6 months removed from his surgery, so it should not alarm anyone if he starts training camp off on the Active PUP list. In fact, I would be mighty surprised if he doesn\’t. Starting training camp off on the PUP will allow him to slowly work on building up his conditioning, while also giving him time to learn the nuances of the new offense being installed by Todd Haley. He can also help tutor the rookie Adams in addition.

As far as preseason playing time goes, the third or final exhibition game would likely be the best bet to see him return to the field. There is no reason to rush him along right now, as Adams could certainly use as much playing time as possible to see if he can win the starting left tackle spot. If he can\’t, Starks should be ready to open the season at Denver as the starter on the left side.

The return of Starks also should now allow second year tackle Marcus Gilbert to remain focused on the right tackle position throughout training camp, the position he played for nearly all of his rookie year after Willie Colon was lost for the season in week 1 against the Baltimore Ravens.

While backup tackle Jonathan Scott is likely feeling a bit more uneasy on Tuesday, the Steelers will likely keep him around as long as possible throughout training camp just in case of an emergency. The Steelers have plenty of cap space right now with him on the roster, so it would not be surprising to see him stay until Starks can get a preseason game underneath his belt. It only makes sense to do that. The only way they would possibly need that $2.2 million of cap space that they will save by releasing Scott, is when and if they come to terms with restricted free agent Mike Wallace on a new long-term deal.

The Steelers move to bring back Starks is really a win-win for everyone as the only thing they stand to lose is any bonus money that Starks might have received, and as I noted earlier, that will be no greater than $65,000.

Welcome back Max, I knew you would return!