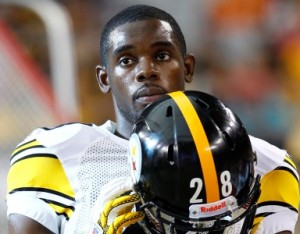 Allen, the Steelers fourth round draft pick last year out of the Citadel, has been training this offseason with Taylor down in South Florida at the Wide World of Sports Complex under watchful eye of trainer Tom Shaw. “I\’ve got Cortez Allen down here and he\’s working like a beast,” said Taylor, when asked by co-host John Harris who Taylor had down there from the Steelers training with him this offseason.

“He\’s a very mature second year guy. The reason why he is so mature is he went to a military academy school,” said Taylor. “He kind of had to grow up early from his childhood. He\’s kind of old to be a second year guy.”

Taylor continued on with his assessment of Allen. “He knows what it takes and he wants it. He wants to get better. The good thing I like about Cortez is he doesn\’t say much, he comes to work and he does what he needs to do.”

The praise did not stop there as Taylor added, “This dude could be way better than me – if he can stay healthy.”

Taylor did caution that the mental aspect of playing the corner position is what Allen will have to show is not an obstacle for him. “Yeah everybody\’s got the physical attributes. Yeah, there\’s a lot of guys that can catch better than me, but upstairs – mentally – that\’s what separates the good guys consistently and the great guys,” said Taylor. “Mentally can they do it for 16 weeks?”

Allen, who had surgery this past offseason on what is believed to have been one of his shoulders, needs to stay on the field during training camp if he is to challenge Keenan Lewis for the starting spot opposite of Taylor. Last year Allen fought a hamstring injury for most of training camp and it forced him to miss the first three preseason games as result. When he finally played in the fourth and final preseason game against the Carolina Panthers, Allen flashed in his limited action at the left outside cornerback position and even forced a turnover on a defended pass.

Once the regular season started Allen saw time on special teams and ultimately some extended playing time on defense in dime and big nickel situations in the games against the Arizona Cardinals, New England Patriots and the Baltimore Ravens. In total Allen saw a total 60 snaps on defense over the course of 9 Steelers regular season games. Not bad at all for a Steelers rookie on defense. Curtis Brown, who was drafted a round ahead of Allen last April, didn\’t see the field at all on defense in his rookie year.

During the offseason practices it was reported that Lewis had been getting the first team reps opposite Taylor with Allen working as the nickel in sub-packages. It appears that will remain the pecking order when training camp opens up in just over two weeks from today in Latrobe. Does Allen have a shot at the starting spot that Lewis currently holds? Anything is possible, but rest assured that Allen will see the field quite a bit this year in some capacity.

One thing is for sure and that is you can certainly hear in the voice of Taylor that he thinks Allen has what it takes to be a good cornerback for years to come. He just needs to prove it now.