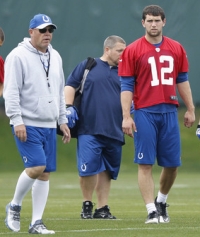 Arians was not offered a contract to return to the Steelers this offseason after spending eight years in Pittsburgh, the last five of which were as the offensive coordinator. The Steelers instead opted to go in another direction offensively, which ultimately culminated in the hiring of Todd Haley.

Arians was thought to have been retired, but that retirement lasted all of two days, according to Mike Chappell of the Indianapolis Star, who details how the phone call went between Pagano and Arians at the end of January. “I said, \’Hey, you retired?\’ ” Pagano offered of his conversation with Arians. “He goes, \’Not if you\’re offering a job.\’ He was officially retired for two days. We hit a home run.”

“It wasn\’t his looks,” Pagano said, laughing, when asked why he hired Arians. “He\’s a brilliant offensive coordinator.”

In his first year back in Indianapolis, Arians will take over an offense that will consist of veteran wide receiver Reggie Wayne and a rookie quarterback in Andrew Luck, the first overall pick this past April. Both Wayne and Luck are quoted to be fond of the direct and up front style of Arians thus far, according to Chappell. Wayne reportedly went as far as calling several players that played in Pittsburgh under Arians over the years to see what they had to say and we he could expect from him. “Everything they said, I\’m seeing with him. Everything,” Wayne said. “He\’s not going to sugarcoat anything. He\’s going to try to correct you and make you the best you can be. If you\’re a veteran guy, you\’ve got to understand that and take the good with the bad.

Pagano and Arians aren\’t strangers eiother as both worked on the Cleveland Browns coaching staff together from 2001–2003. Arians was the offensive coordinator there in Cleveland, while Pagano coached the secondary.

It will be interesting to watch the progress that Luck makes under Arians, who was also the quarterbacks coach in Indianapolis when Peyton Manning entered the league. Arians has some help installing his offense with the help of a few former Steelers in addition. The Colts signed free agent veteran running back Mewelde Moore several weeks ago to likely serve as a third down and change of pace back, just as he did in Pittsburgh. In addition, the Colts also hired Harold Goodwin away from the Steelers to be their new offeensive line coach. Goodwin served as a the Steelers quality control coach since 2007.

The Steelers will get a chance to face Arians this year in the preseason as the Colts visit Pittsburgh in the second game of the preseason on Aug. 19. That is a Sunday night game and will be televised nationally on NBC.