Hopefully you checked out the videos I posted this morning in the Six Around The Web post of Pittsburgh Steelers defensive in Ziggy Hood, who is currently working out this off-season at Outer Limits Sports Performance in Pittsburgh. Hood, who has long been known as a workout warrior, is entering his fourth season in the league and quite a bit is expected out of him at left defensive end this year.

The folks at Outer Limits passed along some info to me today on the transformation that Hood has made since working out there and you can see the before and after photos below that were pulled off of their website. According to the info they passed along on the blog, there were 29 days between the before and after shots which was from phase one, which ran from March to April. Hood reportedly dropped his body fat from 24% to 18% during that time span and his weight went from 305 to 307 pounds. He lost 18 pounds of fat and gained 20 pounds of muscle.

Reportedly Hood is starting phase four this week and will continue to train at Outer Limits until July 27th, which is right before training camp gets underway in Latrobe this year. During the OTA practices this off-season, Hood reportedly has been practicing while wearing a weight belt in addition.

Hood has made 23 starts in his first three seasons in the league and has a combined 59 tackles, 39 of which were solo to go along with 5.5 sacks. If the photo below is from phase one, it will be interesting to see the complete transformation shots after he is done training this off-season. 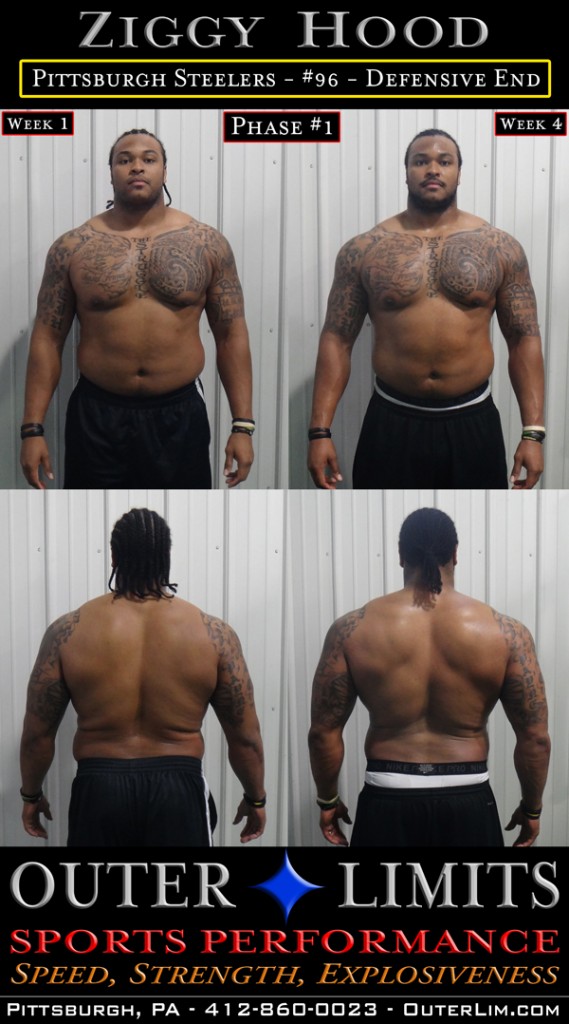