It has been a busy last four weeks in Pittsburgh, but it all came to an end today as the Pittsburgh Steelers have now wrapped up their final mandatory mini-camp practice of the 2012 off-season with Funny Hat Day. Several players took to the field for a short special teams session while wearing everything from professional wrestling masks to an old time leather helmet.

Hat day was born in 2007 when veteran wide receiver Hines Ward suggested to Mike Tomlin, who is in his first season as the head coach, that the players have a day or two on the field during the spring without wearing helmets.

The final day featured a throwing contest between quarterbacks Byron Leftwich and Troy Smith. Leftwich beat the former Heisman Trophy winner with a throw of 73 yards.

While there has been quite a bit of fun items to watch and interviews to listen to over the last month, the biggest news of all to come out of the off-season sessions is that the Steelers appear not to have suffered any serious injuries. Players like James Harrison, Jason Worilds, Stevenson Sylvester, Weslye Saunders, Curtis Brown. Emmanuel Sanders, Ramon Foster and a few others might have missed a few sessions here and there, but everyone should be close to 100% by the time training camp rolls around later next month.

While Rashard Mendenhall and Casey Hampton continue to rehab from their knee surgeries, Baron Batch was able to ditch his blue non-contact jersey during mini-camp. Batch of course tore his knee up late last year in training camp and appears to be good to go next month. Brett Keisel, who suffered a groin injury in the AFC Wild Card game also took his normal reps according to reports, as did Willie Colon, who was moved to left guard following the draft. Colon tore his triceps in the week one game last season and was lost for the year.

Health aside, the Steelers also had solid attendance throughout their organized team activities and mini-camp. Troy Polamalu, who normally stays home in Southern California, was here this year and the only notable player absent was Mike Wallace, who has yet to sign his one-year restricted tender.

The players are now on their own, and while players like Ike Taylor will head back down to South Florida to continue his training with Tom Shaw, other like Ben Roethlisberger intend to head overseas to play golf. A few players such as Jonathan Dwyer will be conducting football camps back in their home towns, while others will likely remain in Pittsburgh and train.

Next up is training camp, so let the countdown continue. 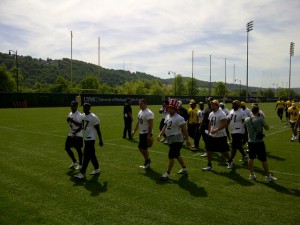