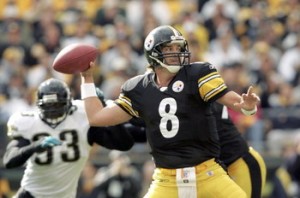 The incentives to earn more on the new contract included so many terms, it is hard to keep up with.  Signing bonuses, annual salaries, roster bonuses, playing time, passer rating, interception percentage, passing yards, touchdown passes and whether or not he made it to the Pro Bowl were all figured in.

The problem was that the Steelers selected Roethlisberger in the first round of the draft earlier in the year. After being injured during the week two game against the Baltimore Ravens in 2004, Roethlisberger took over for Maddox and led the team to 14-straight regular season wins and a trip to the AFC Championship game.

Maddox saw action early in 2005 when Roethlisberger suffered a knee injury, but he gave sub-par performances and earned himself a nickname of “Tommy Gun Shy” and “Tommy Under the Gun” by some, although he was first called “Tommy Gun”.  It was losses to the Jacksonville Jaguars and the Ravens that sent him to the bench and brought Charlie Batch onto the field.  Maddox was released following the Steelers\’ win in Super Bowl XL.

Maddox is only one of three players to hold both a Super Bowl ring and an XFL (now defunct) championship ring (with Bobby Singh and Ron Carpenter).

Roethlisberger was named the NFL\’s “Rookie of the Year” in 2004, and Maddox never did get his big deal after all. 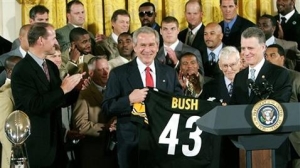 The distinction of being invited to the White House to meet with the President of the United States and other national officials has become quite a \’to-do\’.  Interestingly enough, it was the 1979 Pittsburgh Steelers who were the first team to ever be invited.  After winning Super Bowl XIV, the Steelers joined President Jimmy Carter at the White House. They were joined by the 1979 Pittsburgh Pirates who had won the World Series.

In 2006, linebacker Joey Porter stepped into a proverbial faux pas via a joking comment to members of the media when asked about the upcoming visit to the White House. The Steelers were invited to the White House to celebrate their win in Super Bowl XL on the 2nd of June. Porter jokingly told the press, “Yeah, I have something to say to (George W.) Bush too.  I\’m looking forward to it…I don\’t like the way things are running right now.”  Laughing, Porter continued tongue-in-cheek, “The government\’s taking too much money out of my pocket.”

According to the Allegheny Times and ESPN, Porter later made a public statement via the team\’s media relations department regarding his comments.  “I regret that my quotes about our team\’s upcoming visit to the White House were taken out of context,” Porter stated.  “I am very excited to have an opportunity to visit the White House and meet the president…the quotes attributed to me  in the media in recent days were inaccurate.”  Porter relayed that his concerns were mainly about FICA (the Federal Insurance Contributions Act) and that he did not have a personal dislike for the president. “We will be guests of the president and I would never do anything to disrespect him.”

Ed Bouchette of the Pittsburgh Post-Gazette covered the actual visit. President Bush called the Steelers “champions on the field and off the field” and said, “Halfway through the season, a lot of people counted the Pittsburgh Steelers out, said you don\’t have a chance.”  The entire ceremony took about 14 minutes.

The president told the Steelers, “You had a ring for every finger, and now you got one for the thumb.”

Porter did attend the ceremony, even if he wore dark sunglasses.  President Bush sought out Porter and said of him, “You got a man known for his swagger.  I\’ve been looking forward to Joey Porter\’s new dance.”  When they shook hands, it put any misconceptions to rest.