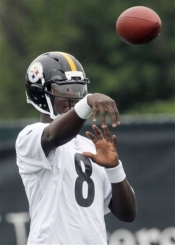 Johnson, who was signed to the expanded roster following the 2011 season, now will try to show the Steelers that he has enough upside to warrant a practice squad spot, as it is very unlikely that he will be unable to unseat veteran Charlie Batch for the number three spot on the depth chart.

It has been a long road for the 6-foot-5 Johnson, who was once considered a Heisman candidate following his 2009 season at A&M. As a junior he threw for 3,579 yards in 13 games. During that season he was 296-of-497 passing with 30 touchdowns and just 8 interceptions. 3 of those 8 interceptions, his first of the 2009 season, came in the sixth game against Kansas State. Up until that game Johnson was 127-of-211 passing for 1,579 yards with 14 touchdowns. The monster 2009 season of his also included him rushing for another 506 yards giving him 4,085 yards of total offense produced.

Johnson needed shoulder surgery on his throwing arm the following spring and it reportedly caused him to lose velocity and accuracy as a result. He was able to recover by the start of the 2010 season and had two solid games right off the bat against Stephen F. Austin and Louisiana Tech.

The next few games did not go so well for Johnson as he was 105-of-201 passing for 1,276 yards with 9 interceptions and 8 touchdowns. Sandwiched in the those five games was a 40-of-62 performance for 409 yards and 5 touchdowns, but it also included him throwing 4 interceptions in the Aggies 38-35 loss to Oklahoma State. Johnson was yanked in the seventh game of the season against Kansas in favor of Ryan Tannehill and he never regained his starting spot.

Johnson was invited to the 2010 NFL combine but did not wow any of the scouts. Heading into the draft he was deemed a quarterback that rarely set his feet well and had accuracy issues. Several scouting reports said that Johnson had a bad habit of locking onto one receiver and forcing passes. He would ultimately would go undrafted in the April NFL draft, but was selected first overall in the 2011 UFL Draft in May by the Hartford Colonials, who ended up folding before the season started.

Johnson ended up being signed as an undrafted free agent by the Philadelphia Eagles following the lockout, but was waived a few weeks later. He eventually signed on with the Arizona Rattlers of the AFL, but did not play.

During his short time with the Eagles Johnson was quoted as saying, “I\’ve just got to get back a little confidence so I can play the game the way I always played it, not doubting myself, not second-guessing myself. Just going out and playing the game.”

Prior to being signed by the Steelers, Johnson was training at the Air14 Quarterback Academy in Texas under the guidance of former A&M quarterback Kevin Murray. There were some rumblings that Johnson had regained his arm strength and had improved his accuracy, but that information could have been circulated by Murray himself.

The main thing now is that Johnson appears to be set to at least get some reps in training camp with the Steelers and mop up in a few preseason games. The best thing he can hope for though is to impress enough to get a spot on the practice squad.