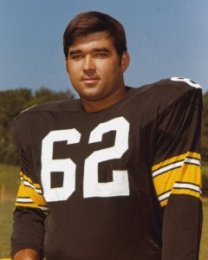 Wenzel was originally drafted by Green Bay Packers in the 11th round of the 1966 draft. The Packers traded the San Diego State product to the Cleveland Browns shortly after he was drafted. The Browns ended up waiving Wenzel shortly after trading for him and the Steelers claimed him off of waivers. It was the third team in less than two months time for the 6-foot-2, 240 pound guard.

Wenzel played five seasons with the Steelers and wore number 62. He is listed as playing in 43 games for Pittsburgh and he would go on to play two more season with the San Diego Chargers.

Wenzel is likely best known for being the spouse of Eleanor Perfetto, who on her husbands\’ behalf, was the first to file a workers\’ compensation claim with the NFL for dementia resulting from injuries on the field in 2010. Perfetto asserted that the early-onset dementia that her husband suffered from was an occupational hazard of his seven seasons as an offensive lineman in the NFL. Perfetto was also one of many family members of former NFL players that had testified back in 2009 before the House Judiciary Committee accusing the league of neglect in its handling of active and retired players with brain injuries.

The final years of Wenzel\’s life were spent in an assisted living facility, where he needed help dressing, bathing and feeding himself. Luckily Wenzel had qualified for a program back in 2007 that provided financial assistance to former NFL players that suffered from dementia and Alzheimer\’s disease. Under that program, former players could receive up to $50,000 a year for home care and up to $88,000 if they were institutionalized. At that time, activists viewed the NFL/NFLPA program as a landmark one and Steelers owner Dan Rooney was a member of the NFL committee that oversaw it.

Wenzel has a website that was set up in his honor that was created by former high school players that played for him. The site pays tribute to Wenzel and helps collect information about the problems facing many former football players.

Thoughts and prayers go out to the Wenzel family from all of Steeler Nation and you are sure to hear more about this story over the coming days from the mainstream media.

A private memorial service is planned for this weekend. In lieu of flowers, Dr. Perfetto asks that donations be made to the Sports Legacy Institute, PO Box 181225, Boston, MA 02118 or online at
www.SportsLegacy.org.

Below are some links to read up on the fight of Perfetto: