Last season I brought to your attention that the NFL photo store was selling pictures of a concussed Cleveland Browns quarterback Colt McCoy sitting on the ground following the hit made by Pittsburgh Steelers linebacker James Harrison in the fourth quarter of the week 14 game. You do remember that play, don\’t you? It was the one that resulted in you suspending Mr. Harrison for one game as repeat offender of illegal hits, if you need your memory jogged.

Shortly after making you aware of this situation, the photos were quickly pulled and your league spokesman, Greg Aiello, conveniently blamed it on an automatic feed of AP photos into the system. In no way would you ever want to glorify illegal hits moving forward, and you especially would not want to use the video of illegal hits as a method of entertainment either, correct?

I think you should know now that tonight on The Top 100 Players of 2012, that is shown on the NFL Network, which just so happens to be owned and operated by your league, that Mr. Harrison ranked 29th overall. I also think that you should know that during the vignette that celebrated the ranking of Mr. Harrison, a clip was shown of his illegal hit on Buffalo Bills quarterback Ryan Fitzpatrick back in week 12 of the 2010 season. Do you remember that play? It was the play that the referee was noticed pulling out his flag before Fitzpatrick even hit the ground. To further refresh your memory, it was the play that resulted in you fining Mr. Harrison $25,000.

Now surely this had to be some sort of automatic feed error that can be blamed on the AP, correct? Surely YOUR network would not intentionally include an illegal hit replay in a video vignette as means of entertainment. That would be hypocrisy if you did. I thought that the league frowned on promotion of pictures or videos of illegal hits and their aftermath. I thought you took player safety more serious than that, especially in light of the whole New Orleans Saints Bountygate fiasco and the recent suicide of Junior Seau.

If you ask me, I think you and your league has a double standard when it comes to these types of hits. You say that you don\’t want them, but once you get them, you are not afraid to use them as a promotional tool for the league.

I am pretty sure that this little hypocritical mistake will be corrected soon, and that fans will no longer be able to watch the video that is currently available for viewing on NFL.com, the official website of your league. I am enclosing a screenshot below so you can see the hypocrisy that I am referring to in this letter.

PS – Please tell Matt Light that Mr. Harrison is an outside linebacker and not a defensive end. He sounds silly.

PPS – I think Lindsay Rhodes does a great job on your network and needs a raise. 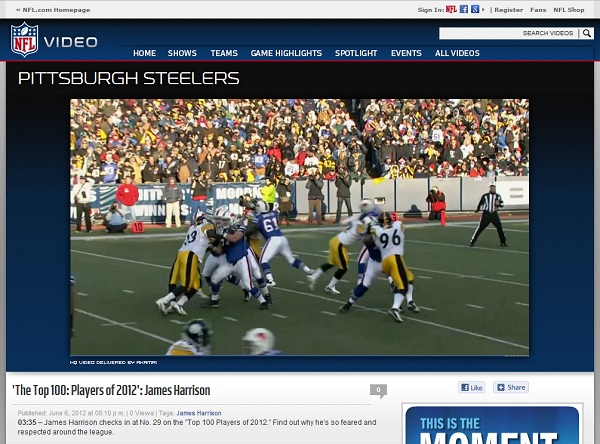