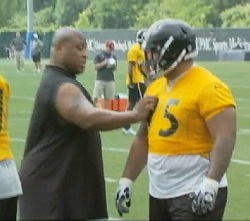 Pittsburgh Steelers veteran nose tackle Casey Hampton might not be ready to practice yet, as he continues to recover from off-season knee surgery, but it is not keeping him from contributing in mini-camp as coach and mentor to fourth round draft pick Alameda Ta\’amu.

The video recap of the first day of mini-camp, that is posted on steelers.com, shows Coach Hampton in action as he instructs the Washington product during the Tuesday practice. This is the type of stuff that you love to see as a Steeler fan, and it is by no means a new occurrence, as the veterans have a long history of helping the young players on the roster instead of viewing them as someone that could ultimately take their job.

According to Will Graves, the Pittsburgh area AP writer, somebody put a “Coach Hampton” sign over Casey\’s locker recently. Hampton was evidently asked about it and joked that he\’s all for it “if they add it to my salary,” according to Graves.

Since being drafted by the Steelers back in April, Ta\’amu has said all the right things including how much he admires Hampton. With Chris Hoke now retired, the rookie will have to learn most of the nuances of playing nose tackle in the Steelers 3-4 system from both Hampton and Steve McLendon, along of course with defensive line coach John Mitchell. Even the Hoke is retired, he has been spotted at the Steelers practices this off-season, which gives Ta\’amu yet another experienced player to learn from. That\’s the Steeler way in action.

Hampton was not only asked about his tutoring of Ta\’amu thus far, but also about McLendon, who will likely start the season at nose tackle if Hampton is not ready by week one. According to Graves, Hampton said that McLendon could start for a number of other teams in the NFL already in his opinion. That\’s high praise, but not unexpected as Mitchell said following the selection of Ta\’amu that the Troy product should not be discarded as big contributor in 2012. “Everybody wants to discard McLendon. Let me tell you this, hold your opinion until the season is over,” Mitchell said. “I’m just saying keep your opinion until after the season, (then) you make the decision.”

Hampton also commented Wednesday on his recovery from his third career ACL surgery as well. Graves reports that Hampton said that his rehab is going well so far at that his main focus right now is being ready for the week one game against the Denver Broncos. He added that he doesn\’t expect to be ready by the start of training camp and that is not a big concern to him. Hampton has long been expected to be placed on the Active PUP list once he arrives in Latrobe a little more than a month from now.

Prior to the draft, Hampton, who is entering his final year under contract, was asked to take a pay cut, and he obliged. The veteran surrendered his $1 million workout bonus he was scheduled to earn and allowed his 2012 base salary of $4.89 million base salary that he was scheduled to be paid to be reduced down to $2.8 million. The moved saved the Steelers $3.09 million in cap space as a result.

Ta\’amu, who reportedly needs to lose 10 more pounds by the start of training camp according to Graves, will benefit greatly by having Coach Hampton around as he attempts to make up for time lost because of NFL rules that prevented him from attending OTA sessions until his college course work was completed.

Mark Kaboly of the Pittsburgh Tribune-Review posted some video of Hampton going through some of his rehab drills on Wednesday and you can watch it below.