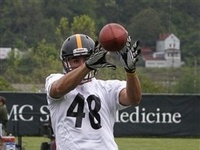 The Pittsburgh Steelers drafted Oregon tight end David Paulson in the seventh round of the 2012 NFL draft and he will certainly have the odds against him making the 53 man roster. Paulson will not be able to roll up to training camp and be given anything but a chance to earn a roster spot. Many don\’t know his name and many will write him off, but if he comes to Latrobe with a willingness to work hard and the drive to succeed, I think he can become a functioning member of the Steelers 53 man roster.

If we quickly take a look at the list of possible tight ends, it\’s a gloomy picture. Luckily Heath Miller is at the top of that list and he will be the work horse again at the position. I\’m going to assume two more tight ends will make the 53 man roster and another could be put on the practice squad. The guys fighting for these spots are Leonard Pope, Weslye Saunders, David Johnson, Will Johnson, Jamie McCoy, Wes Lyons and of course Paulson. That is a lot of names that were on the Steelers roster before they selected Paulson in the seventh round. The question then becomes, how much do the Steelers really value those players if they decided to spend a 7th rounder on another tight end to throw into the mix?

I\’m going to assume that David Johnson will live or die roster wise as a fullback, if one is needed. Pope is a little older, and while he knows Todd Haley and his system well, I don\’t think he is anything more than a temporary replacement for Saunders, who will miss the first four games of the season due to his suspension. Will Johnson might can replace David Johnson as the blocker in running situations and still be an option as a receiver. McCoy and Lyons are too unknown for me to really know if they have anything going for them. If the Steelers felt good about either, then Paulson probably wouldn’t have been drafted.

There are a few nuances that are working in Paulson\’s favor. Firstly, Will Johnson has a lot to prove and is in the same boat as Paulson right now. If Paulson loses a roster spot to Will Johnson then he has no one to blame but himself. There is a possibility that he might ride the practice squad in that case, but how many late option tight ends do the Steelers need? Secondly, Saunders suspension could ultimately get him booted off the roster. I think the drafting of Mike Adams shows that the Steelers are not short on giving second chances, however, he failed to really shine in his first year on the roster and doesn\’t have much more promise than Paulson right now.

These may not be concrete points, but they are questions marks. Question marks are the foundation for doubt that new players can ride to a roster spot. I imagine that Will Johnson will make the 53 man roster. If they don\’t pick him, then they might keep David Johnson as a dual purpose H back. That leaves one spot for Paulson to fight for with Pope and Saunders. Pope will be the Haley ambassador and will help this stable of tight ends learn the new offense quickly. Outside of that, he is an aging, one dimensional tight end. If they keep Pope, they want a second tight end that is a receiving option. If that\’s the case than Saunders is just like Pope and will likely be wanted over him when available.

Paulson has two lifelines that he can pursue to get on the 53 man roster this year. He can either replace Pope or Saunders as the receiving tight end or replace Will Johnson or David Johnson as the blocking alternative. While mastering either trait completely is not a necessity initially, I think he will need to show something in camp to be considered. He had the activity in college to suggest that he can catch passes in the pros. He also has the solid frame and underwhelming height that can support possible success as a blocking tight end. This will be a harder sell for him, but he doesn\’t need to show massive blocking skills, just enough that he\’s capable and warrants more development time.

Showing either of those traits in camp will lead him to the practice squad if not the roster. Unfortunately for him, there are others around him that Mike Tomlin will have to make a judgment call on. If he likes Will Johnson and feels comfortable with the extra year Saunders has, Paulson might get sent packing. With lower end options galore, I thought that they would draft a higher profile tight end. The fact that they didn\’t isn\’t too surprising seeing as it is a need that will only have a low, fixed number of reps per game. The fact that they drafted a tight end in the 7th round does however point to wavering belief in their current options behind Miller. Paulson might not have the guarantees of a high round tight end, but he does have a good opportunity to make the roster and contribute in his rookie year, even if it ends up being on special teams.